Off Topic: Why American Truck Simulator is my current obsession (yes, really) 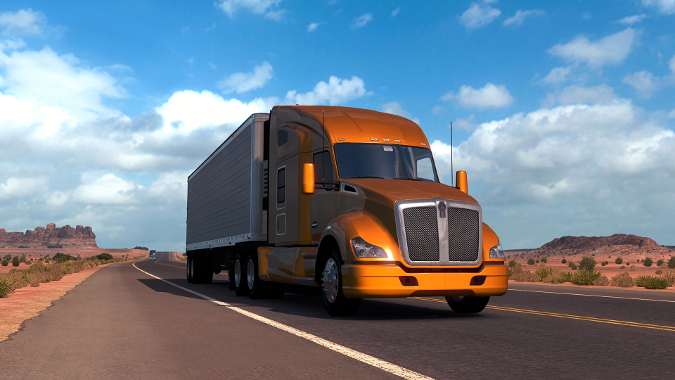 I picked up American Truck Simulator the same way many of us acquire new games these days — a Steam sale was on and it was like $5. I was looking for new games to play on my personal stream, and an intersection between low box price and decent stream metrics is hard to come by. Surprisingly, I got a bit more than I bargained for.

The gist of American Truck Simulator‘s gameplay is right in the name — drive a simulated semi-truck through the America. The base game includes just California, but SCS Software has been slowly releasing map updates — I threw in the Arizona and Nevada packs and a couple trucks for a couple bucks extra, and since then, they’ve also added New Mexico and Oregon maps.

A big reason I can’t put it down is the zen — yet terrifying — gameplay. Much like driving on a real highway, much of it is absolutely monotonous, just driving along a road with relatively few cars. Then every so often, the cars ahead of you brake suddenly. The exit you need to take is closed and you’re already halfway through the turn. You clip a cement median at speed. The end result is generally the same — thousands of dollars for a tow. Worse, your delivery is damaged and delayed, meaning you also make less cash for your time. Much like real life, if you do this too often, it could mean trouble with the bank. 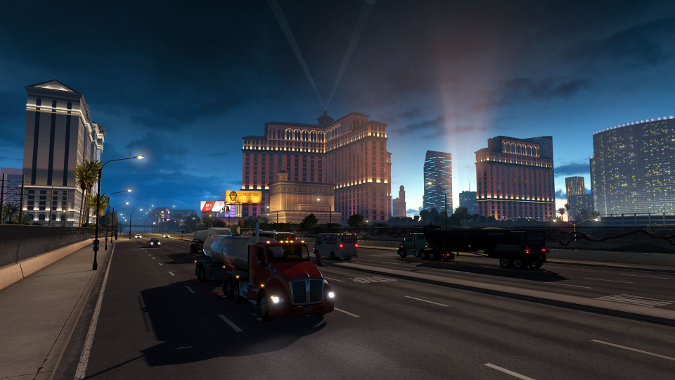 On the gameplay alone, the game would be good for a bit of a diversion from time to time. The thing that really brings it home for me is the massive — but quiet — community, which goes double for its predecessor Euro Truck Simulator 2. This is even evident if you’re not really looking for it. The in-game radio comes with several channels which pull from real terrestrial radio stations, but four channels are continually maintained by the community. You can even listen to some of them in-browser if you’d like. It does break immersion a bit to have the radio ask you to contribute to their Patreon or check out a particular Twitch stream, but it also pulls back the veil. From modders to enthusiasts, there’s a bustling community of people who are extremely devoted to this game.

If you follow the wider world of esports, you may know of the splash Giants Software made a few weeks ago when they announced a huge circuit tournament for their cult hit game, Farming Simulator 19. The competition itself focuses on both speed and accuracy, and…  I think I’ve heard of that game before? To games press, this came out of nowhere — but I’ve seen people who’ve bought gaming wheels and then a second “wheel cam” at fan request. Heck, I even went and bought a novelty trucker hat. The people who enjoy these games enjoy them hard, and in a business sense, it’s untapped potential just waiting for advertiser dollars.

From cosplay meetups to people going to a Marshmello concert in Fortnite, one of the best things in gaming is getting to see people who are really passionate about a niche topic getting to share that with others is the best part of being in the larger gaming community. I got to experience this firsthand with pet battles in World of Warcraft, but there’s a whole world of people out there with a quirky passion they’re just dying to share that you probably haven’t even heard of yet. American Truck Simulator is just one of those.