The Diablo 3 Barbarian for beginners

Diablo 3 has been out for a few years now. But maybe you never played, or maybe you’ve always played the same class and you’re looking to dip your toe into a new class. Maybe you’ve decided to catch up on Season play and you want a change. Maybe you’ve always wanted to try a Barbarian but they look daunting and you never have. This column is for you, whether you’re a complete newcomer to the game or just to the Barbarian class.

Let’s take a look at Barbarians for beginners. 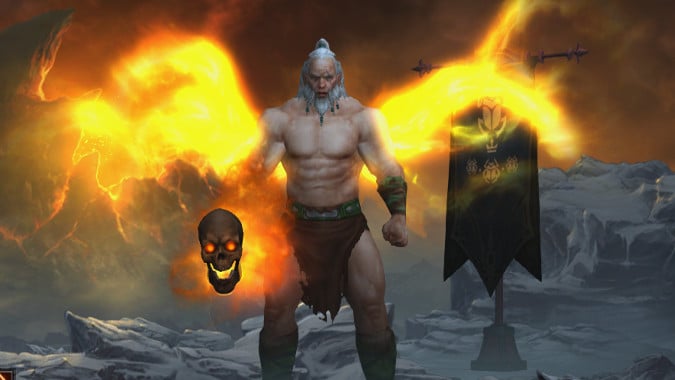 When you start the game, you wind up outside New Tristram with nothing but a loincloth, an axe and a shield. It’s a little weird because unlike the Crusader, Barbarians don’t really get any abilities that use a shield, but then again at 1st level pretty much all you can do is click on mobs anyway. I start any new Diablo 3 game with a sort of 20 level plan keeping the following in mind.

If you’re about to ask me what weapon you should use, the answer is simplicity itself — the best ones you have. If you have two one-handed Mighty Weapons and a two-handed sword with a lot more damage drops? Switch immediately. This changes at max level as certain weapons have special bonuses, but we’re not talking about that now. Leveling, just use whatever you have that hits the hardest.

At level 1, the only skill you’ll have unlocked is Bash, which generates 6 Fury. Since you won’t have anything to spend it on until level 2, don’t worry about it until you’re level 2. The upside is, you’ll be level 2 by the time you reach the gates of New Tristram, whereupon you’ll be able to pick up Hammer of the Ancients. That spends Fury and does damage to all enemies directly in front of you. 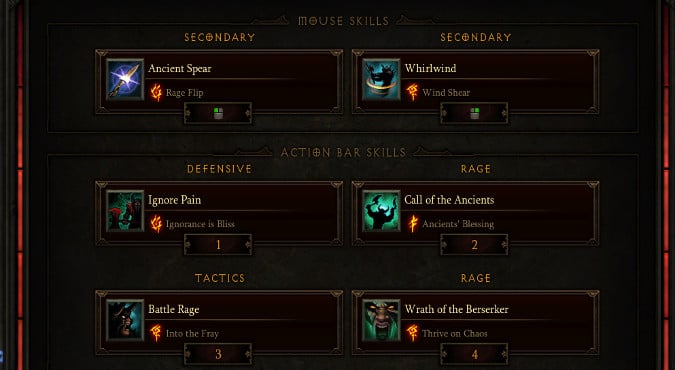 These two starting abilities essentially define the Barbarian for the next seventy levels. All the additional Active and Passive skills to follow just give you more options on top of this basic paradigm. You use your Fury-generating attack until you have enough Fury, then you spend that Fury to destroy as many enemies as possible.

That’s it. That’s the Barbarian class in a nutshell. Getting and spending, we lay waste our enemies.

Certain abilities work much better at higher levels with specific passive options, glyphs and gear sets — I don’t recommend Whirlwind without Wind Shear, and I really only start to love it when I have access to the Unforgiving passive, which you don’t get until level 55. And while I absolutely love Whirlwind, I have the complete Wrath of the Wastes set on my max level Barbarian — you will not have this set, and its astonishing 6 piece bonus, on your level 20 Barbarian when Whirlwind first unlocks.

This may sound dire, but it really isn’t — what it means is, until you hit level 70 and start pushing higher and higher Torment levels, you can spec your Barbarian however you want and not really worry about gear synergy too much. You can experiment. Here’s a level 30 spec that covers pretty much all the basics, adds some survival options like Leap to escape enemies if you get boxed in and Seismic Slam for a ton of AOE damage when needed. The great thing about Diablo 3 is it unlocks all that flexibility over the first 30 or so levels, giving you time to get used to the game and acclimate before giving you more complexity to deal with. After level 30, you just get more choices that fit those six slots.

Because Fury is so important to the Barbarian, when you pick this class up you may not initially understand it, but it’s vitally important that you always be generating it. There are just four Fury-generating abilities:

Choose the one that works the best for your playstyle — I often use Cleave as it hits multiple mobs in front of me or Frenzy as it buffs my attack speed by up to 75% if fully stacked. When using a big slow weapon that attack speed buff can be amazing.

Until you can get the Unforgiving passive, Fury will slowly decay when you aren’t generating it, and so for most Barbarian players low level play is a frenzied series of constantly looking for more things to kill before it runs out. Embrace this. Half of the fun of playing a Barbarian is driving people crazy by running ahead and smashing a new pack of monsters right on the heels of the last one.

Also, as a head’s up, Fury can also be generated by smashing barrels and other environmental objects. If it can be smashed in the game, it’ll generate Fury for you. Smash all the things. Leave nothing standing.

Okay, that’s a basic primer for how to get started as a Barbarian in Diablo 3. Next time, we’ll talk about gear — why is this gear better than that gear, what are legendaries and how do I get them, and so on.