Off Topic: The Odyssey of the Dragonlords deserves your attention

I’ve been around a long time, and I’ve played a lot of tabletop RPGs over the years. I cut my teeth on the Mystara and Greyhawk settings for Dungeons and Dragons, back before the former was even called Mystara, and I’ve pretty much owned every single official setting and a host of third-party ones over the years — be it Athas, Eberron, Faerun, the crystal spheres of Spelljammer, Sigil, the Scarred Lands, I’ve seen a lot of campaign settings. I often will pick up a game like Earthdawn entirely for the world described in the game even though I know I’m not likely to play it — this has been the fate of my Talislanta books, my Nexus the Infinite City softcover, my Exalted and Numenera hardcovers. I love campaign settings, is what I’m saying.

But I honestly think that after reading the free player’s guide to the Odyssey of the Dragonlords campaign setting, I’ve found myself in a place I haven’t been in a very long time — I wish I’d come up with this. I really enjoy what this setting does differently than standard D&D without needing to radically change the game to do it — the setting, the way it handles the past, the gods and titans and oaths and the nature of heroism. And I’m a sucker for ancient Greece, so a campaign setting that takes heavy inspiration from Greek mythology instead of Tolkien is pretty much tailor made for me. The Player’s Guide is 28 or so pages, so it’s not anything like a full setting, but it’s enough to really pique my interest. 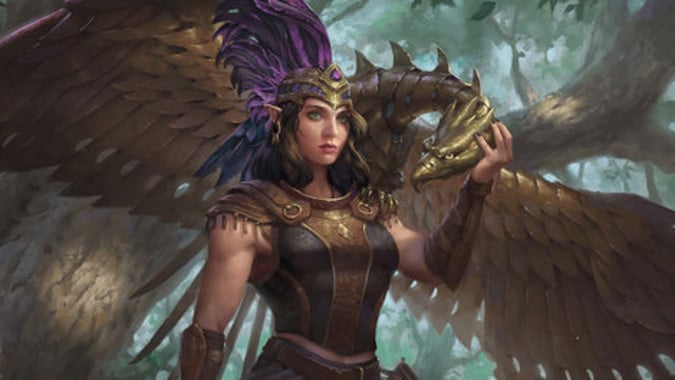 The book is the work of Arcanum Worlds, which is basically two ex-Bioware developers, James Ohlen and Jesse Sky. What they’ve done here is basically taken Greek mythology and used it as a starting point — an inspiration for a whole new sword-and-sorcery fantasy setting, in much the same way that Greyhawk took Tolkien and Leiber and Howard and used them. It’s very much D&D, and that’s the thing I find the most compelling about it — it doesn’t abandon either of its wellsprings, but works them well together. When Ohlen described Jason and the Argonauts as classic D&D “murder hobos” who wander around the world finding things to slay and treasures to loot? He’s not wrong, and the whole Player’s Guide reinforces that feeling. There’s a lot to love here, from the invented mythology of the setting and the origin of the continent of Thylea with its echoes of Hesiod’s Theogony to the way the book weaves in classic D&D tropes like Elves, Dwarves, Halfling, and yes, Dragons without losing its unique flavor.

Reading that this whole project started with Ohlen being offered the freedom to create it as a side project by BioWare, I frankly wonder why the heck they didn’t jump on this property, but I’m also glad that it’s remained in Ohlen’s hands and that he and Sky are working on it. I don’t know for sure when the hardcover book will be released — DriveThruRPG says May of 2019 — but I do know that they reached out to Drew Karpyshyn, another BioWare alum with a heck of a resume under his belt, to help them flesh out the world and its lore. Based on the Player’s Guide, the book will be very well presented graphically, with gorgeous art and clear, readable text. That’s always important to me, and I’m really impressed with what a relatively small self-owned shop like Arcanum Worlds has been able to do so far.

If you like D&D and want a campaign that still feels like it, but which changes up a lot of the underlying assumptions in cool and interesting ways, I recommend keeping Odyssey of the Dragonlords on your radar. We won’t know for sure until the sourcebook is in our hands, but the way the Player’s Guide handles things like backstories, deities and demigods and destiny makes me want to see what they can do with a full fledged setting book.