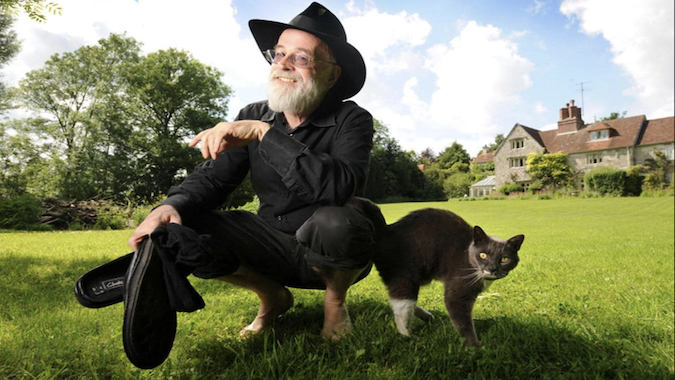 It’s sometimes hard to believe that fantasy fiction was once derided as a genre for authors who couldn’t write “real” books. Now, it is recognized as a literary genre on its own and one of its best practitioners, Sir Terry Pratchett, would have turned 71 on April 28th. Pratchett is perhaps best known for his 41-volume series set on Discworld. This fantasy land is a disc, held up by four elephants — Tubul, Jerakeen, Berilia, and Great T’Phon — who stand on the back of a giant turtle — Great A’tuin — as the turtle travels through space.

I have long enjoyed this series and decided to read all 41 books in chronological order. This is not the order in which they were written. After the first Discworld book — The Colour of Magic — came out in 1983, Pratchett would write an average of two books a year, skipping around to tell whatever story captivated him at that moment. Chronological order reveals the characters and their stories over the course of time. Pratchett died on March 12, 2015 and his final Discworld book — The Shepherd’s Crown— was published that August. As befitting a final book, it wrapped up several stories from characters we’d come to know. 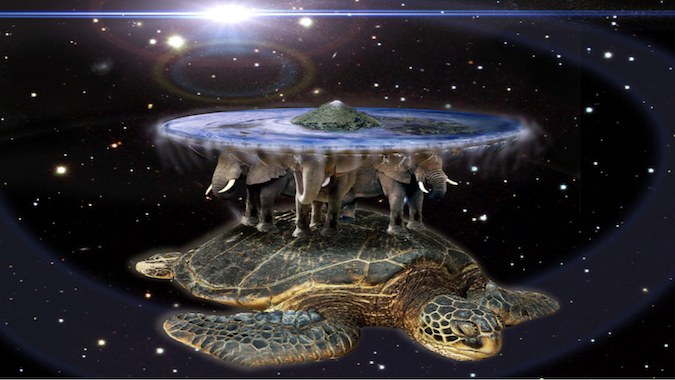 Why should you read any of the Discworld books?

First and foremost, they are wicked funny. Because Pratchett is British, there is that dry British humor (humour?) but funny is funny and some of the books are groaningly funny. Second, Pratchett had a way of skewering pretty much anything. This wry commentary on general life works even decades after some books were written. His characters are often at the mercy of things they cannot control. They find themselves in situations where fast talking and huskerism is the only way to survive. You need to think on your feet and hope you stay one step ahead of the other guy. Rooting for these characters becomes second nature. (Plus, it’s wicked funny.)

And what characters they are. My favorite is DEATH. A typical black-shrouded skeleton carrying a scythe, he shows up throughout the books whenever a death occurs. He speaks in CAPITALS; rides a flying, silver-colored horse named “Binky”; and is very much an angst-ridden demon. (His trying to get drunk is hilarious.) He has a granddaughter and a cat. My favorite lines in all of Discworld are ones DEATH speaks in Sourcery. “What is it that makes life worth living?…Cats. Cats are nice.” When I shuffle off this mortal coil, I do hope it’s with this gentleman.

After DEATH, I’d have to go with Commander Samuel Vimes of the Night Watch. He first appears in Guards! Guards and his story is told through 14 different books, including a children’s book — Where’s My Cow? — based on a story Vimes is reading to his son. If you were looking for a way to dabble in Discworld, but not read all 41 books, just reading the books involving Sam Vines would give you a great cross-section of the characters and the world. It will also show you Pratchett’s craft. Vimes grows as a character — from the curmudgeonly head of Ankh-Morpork’s Night Watch to “His Grace, His Excellence, The Duke of Ankh; Commander Sir Samuel Vimes” — a title he hates, by the way. 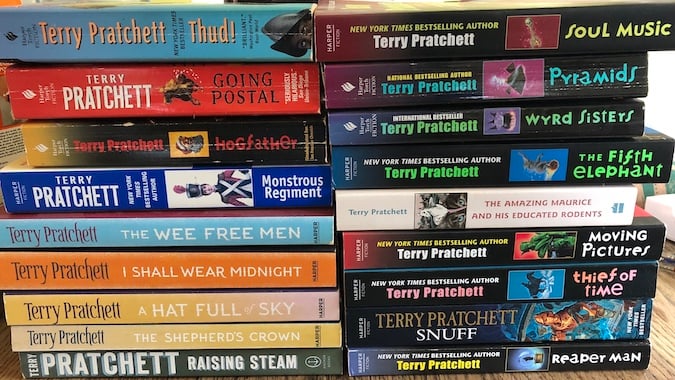 How should you read Discworld?

Get the first two — The Colour of Magic and The Light Fantastic. Colour is the very first and Fantastic is the sequel to it. These two will give you a sense of Pratchett’s use of language and of the wonder of Discworld. After these, you can read the books in many different ways. I referenced my chronological reading. It took me two and a half years to read them all because I did have other things going on. Some books — Weird Sisters, The Wee Free Men, Going Postal — I couldn’t put down. Others — Snuff, Small Gods, Making Money — were not, for me, as riveting.

You can read with characters in mind. I mention DEATH and Sam Vines above. The Tiffany Aching series of five books are written to be accessible to young readers, but I adore the Nac Mac Feegles. That starts with The Wee Free Men. Also good is the series of books revolving around the witches which starts with Equal Rites. This link to the Wikipedia listing of the Discworld books provides several ways of reading them including the chronological method I used. 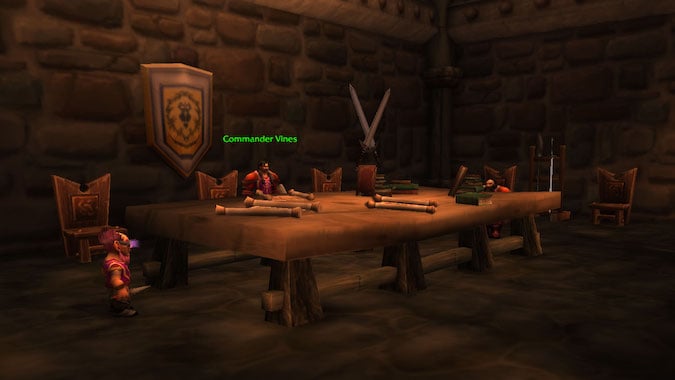 Discworld and World of Warcraft

As you would expect, there are a quite a few references to Discworld in World of Warcraft. Duskwood’s guards are called the Night’s Watch. Gor’in Littlebottom in Wyrmrest Temple references my favorite Discworld dwarf, Cheery Littlebottom. The Creepy Crate battle pet is a reference to The Luggage. The quest chain of the Tortollan at the northwest corner of Stormsong where you help Ai’twen is a reference to A’tuin. Commander Samaul and Captain Garran Vimes in Dustwallow Marsh represent Commander Sam Vimes.

The best reference is a trio, shown above, found in the other keep in Nethergarde in The Blasted Lands — pre-Warlords of Draenor version. That’s Corporal Nobsy (Corporal Nobby Nobbs), Commander Vines (Vimes), and Sergeant Krolan (Sergeant Colon). You know to click repeatedly on a city guard to get a variety of comments. Go do that them and stick around for — roughly — 10 minutes while they have something of a conversation.

When pressed for my favorite Discworld book, I’m rather torn. Some I like much more than others. I’ve referenced a few above. The Shepherd’s Crown ranks high because it was Pratchett’s last work. He deals with mortality in a profound manner. It’s an exceptional read and all the more poignant by Pratchett’s passing before it was released. I also recommend Soul Music, Reaper Man, Wyrd Sisters, and Monstrous Regiment. Any of those will give you a taste of life on the Disc. Dive in. I think you’ll find this world a lot of fun.

Blizzard Watch is made possible by people like you.
Please consider supporting our Patreon!
Filed Under: Books, Discworld, Off Topic, Recommended Reading, Sir Terry Pratchett
Advertisement