If you could play an NPC class, what would it be and how would it work? 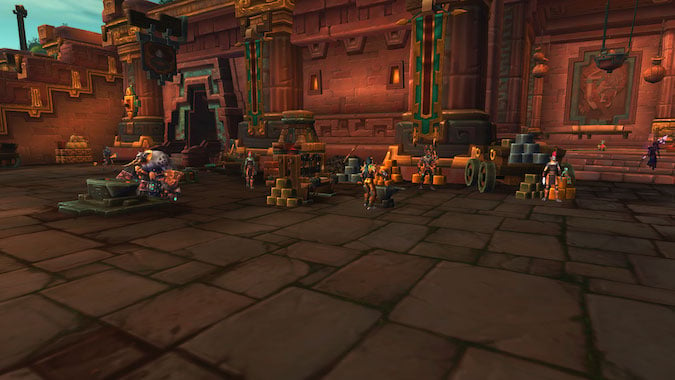 I’ve been reading a philosophy book about World of Warcraft. The article I just finished wonders how the game would play if we were allowed to be something other than the agents of war. What if we were allowed to play non-combat roles — diplomats, bankers, vendors, or craftsmen. What if we were tasked with being diplomats to other races, beyond the quests revolving around “Here. Take this letter of introduction and go help them?” What if we were charged with the gargantuan task of equipping the army? Just how many thick paleo steaks would be needed and where are you going to get them?

This is an interesting supposition, particularly in light of all the people we encounter in major cities. How different would the game feel if I was a part of the diplomatic corps? Speaking as an Alliance, it seems a huge strategic blunder to attack the city of Dazar’alor. It feels as if there was a diplomatic error made in this decision. I would not have voted for an attack. But perhaps, there is more to the story — as there usually is in diplomatic intrigue — than we know. For the record, I dislike the game Diplomacy, but a Diplomat class might be different.

How different would the game play for you if you were a tradesman? Vendors have wares. For instance, armor vendors sell Chainmail Gloves. If I could play this vendor, how would I create these gloves to have for sale? I would need to have a source of metal and access to a forge. Or maybe could I be a source for all those pieces your character makes to level blacksmithing, which don’t sell in the Auction House. What if I broke things down into their component parts and had those parts available for a limited time, say 3 hours after a piece is sold to me? It could work akin to how some vendors occasionally have that random health or mana potion, or that one pattern you never seem to find because someone else has beaten you to their wares.

So let’s do some “what ifs”. What if you could play a non-combat NPC class as a player character? Would you? If so, what class would you choose? And then, how would you see this class interacting in the world of Warcraft? How would you level and what kinds of quests would you do?

Blizzard Watch is made possible by people like you.
Please consider supporting our Patreon!
Filed Under: Breakfast Topic, Classes, NPC
Advertisement