How did you pick your guild name? 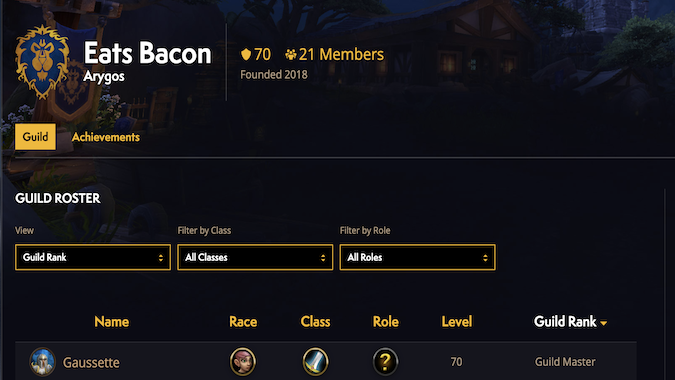 One of the things I like to do when waiting for Galleon — and all the rest — to spawn, is to mouse over all the people waiting with me and read their guild names. Back when we didn’t have connected realms, you’d see and get to know the guilds on your realm because the most active ones tended to be in places where a lot of people congregate. You’d see their members standing around in Stormwind or Orgrimmar and running in world events. With connected realms, I’m finding it hard to see the same names more than once. Plus, a lot of the guilds I remember being very active have disbanded.

Above is a storage guild where inactive toons created by members of my guild go to hang out. The way these kinds of guild names work is the character name is followed by the rest of the sentence. So, Gaussette <Eats Bacon>. Silly I know, but it’s a running joke in the main guild so it fits us.

There are very clever names out there. I like the ones that are puns. There are Latin names. I remember a French Canadian guild during Wrath of the Lich King. I remember a chocolate-based guild name and the guild “Keys” where every toon in the guild was the name of a keyboard key.

With WoW Classic arriving in August, there will be more guilds running around. Creating a name can be tough. You can’t change it so any spelling mistake is yours until you disband. I intend to use my main guild’s name in Classic, so that will be easy, but you may have other plans.

You want a distinctive name for your guild — one that sets you apart from all the other guilds out there and maybe gives people an idea of who you are. “Eats Bacon” doesn’t tell you anything about the guild other than they probably are casual and don’t take themselves seriously. Some guild names — such as Method, Pieces, Limit — are direct and to the point. If you didn’t know they were hard core raiders, you probably could deduce this just by the one-word name.

How did you come up with your guild name? Are you or are you going to choose a new name if you’re going to make a guild there?

Blizzard Watch is made possible by people like you.
Please consider supporting our Patreon!
Filed Under: Breakfast Topic, Guild, Guild Names, World Of Warcraft Guilds
Advertisement