The Queue: I wasn’t kidding 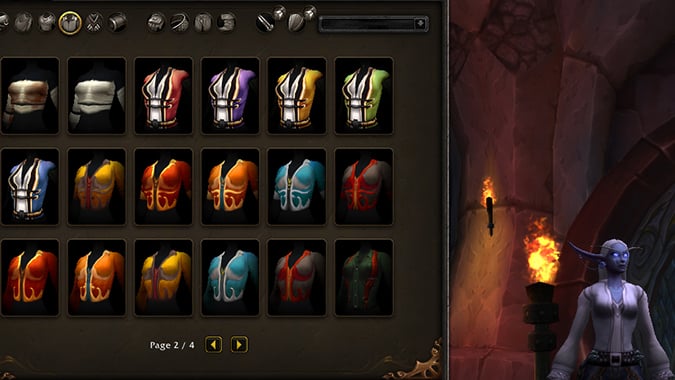 For anyone that might have questioned whether or not I was serious in last week’s Queue, oh yes. Yes I was completely serious. I have so many shirts you guys. And all of them are now happily on display on my characters, exactly where they should be.

I mean yes I love the new zones and quests and cool stuff but…shirts, you guys. Embrace the shirts.

Q4tQ: There’s been some arguments on streams I watch that are arguing that the WOW token will not be available in Classic. While I know it wasn’t part of the Vanilla experience, I can’t imagine that Blizz would not include it and, thus, shut down Gold sellers and scammers that plagued Vanilla. What do you think?

As far as I’m aware, it will not be available in Classic — and that’s a good thing. It wasn’t available when the game first came out, and if it were available, it would completely trivialize a lot of the challenge involved with playing in vanilla way back when. Gold was hard to get. It forced you to make some really tough choices in regards to what you purchased, what you made yourself, and whether or not you really needed to pick up that upgrade from the Auction House, or make do with what you had because you were saving up for a mount.

At this point, I’m pretty sure Blizzard has had more than enough years under their belts to successfully crack down on gold sellers before they even have a chance to rear their heads. As much as the floating dead corpses that spelled out the names of gold selling sites were a frequent part of vanilla back in the day, I don’t expect we’ll see their return when Classic arrives.

MYTHRIAK WENT ON FOR A WHILE BUT THIS IS INTERESTING SO WE’RE INCLUDING THE WHOLE DANG THING:

I had a dream, and in this dream, Sylvanas’ tries to side with Azshara at the end of this expansion, only to be betrayed and finally put down by her, leaving both factions like a surprised pikachu. Azshara is cunning enough to see right through Sylvanas’ plan and her “duties” to N’Zoth made her deal with “the true enemy” (as pointed by the Void to Alleria when she met Sylvanas).

– Thrall is uniting both factions against Sylvanas (just like Vol’jin did with Garrosh) but something will happen before the actual SoO2 happen: Sylvanas will “ally” with Azshara and divert the attention from the Horde seat of power to Nazsjatar.

– Sylvanas may be luring Azshara into a way to get rid of N’Zoth’s influence with the Blade. But this is a risky move, even for her, since Azshara is one of the very few people who can outsmart Sylvanas.

– I don’t think Sylvanas will be between Azshara and N’zoth, but between Azshara and the joint forces of the Alliance and Horde combined (check the Crossroads cinematic). Now, how exactly will this work, I don’t know. maybe as a raid boss in Azshara’s last line of defense, or there will be some betrayal between the parts and we’ll see one killing the other before the end…

Do you think this is a possible twist to Sylvanas end, so she doesn’t get a “Garrosh” treatment that the devs been avoiding to give, but in the other hand looks like it’s totally going to happen since the Crossroads cinematic?

You know, I’ve been pondering this ever since the intro cinematic — as Rossi pointed out, Nathanos doesn’t even blink when that flash of light appears in front of him. It’s like he’s expecting it to show up, which leads one to think that somehow, some way, Sylvanas has been in touch with Azshara. There’s a reason the Horde is heading out to the middle of nowhere, and it has something to do with Xal’atath, and something to do with Azshara.

So there’s a couple of things that could potentially be going on here. First, N’Zoth is an Old God, allied with the Void, and it’s been made incredibly clear that the Void thinks Sylvanas is a Thing That Should Not Be. N’Zoth may have asked Azshara to lure Sylvanas to Nazjatar with the intent of getting rid of her once and for all. Note that the thing that pointed us to Xal’atath in the first place was a naga medallion — it’s entirely possible Azshara wanted us to find the thing specifically in order to lead Sylvanas right to her…and to N’Zoth.

Alternatively: Azshara is chafing under the rule of N’Zoth, and intends to use Sylvanas and the blade to basically backstab the Old God and take over. But in order to accomplish N’Zoth’s defeat, he must first be freed — so we can get rid of him for her. Remember, she’s been watching us for all this time, perfectly aware of every step we’ve been taking. She’s no doubt heard tales of how we’ve gotten rid of the other Old Gods, and figures we can do the same for her.

There’s one common theme in both of these scenarios, and that’s the idea that Azshara doesn’t really give a first thought, much less a second, to Sylvanas or her capabilities. Which is perfectly in line with how Azshara thinks — she doesn’t care about individual players, she cares about the game she is playing, and more than anything, she cares about herself. Her empire. Her rule. Yes, she’s been serving N’Zoth all this time, but she’s doing so as a Queen — she refused to bow down to him in Warbringers. That says a lot. In her eyes, Azshara is still Queen, ruler of her own destiny, and if it takes thousands of years of allying with a creepy fish to get what she wants, so be it.

Azshara has offered something to Sylvanas — we don’t know what that something is, but it has to be something pretty substantial for Sylvanas to agree to it. I don’t think Azshara actually intends on delivering whatever was promised. She’s not down for co-ruling with an undead leader. She wants the world to herself, reborn in her own glorious visage…just like what Sargeras promised to her way back when.

So I’m afraid I know the answer but just in case: To unlock flying, do you have to get the Nazjatar and Mechagon reps on the same toon, or can you split them up?

To my knowledge, you have to get them on the same character. When they made reputation account-wide in an earlier patch, it was specifically for those achievements that counted how many reputations you had — but that was it. And gaining revered with both reputations isn’t actually an achievement that’s counted, it just tracks how much reputation you have on your way to unlocking flying. So you’ll need to get to revered on a single character — but once flying is unlocked, it should be unlocked for everyone on your account. Sorry!

Q4tQ: If Blizzard were to get rid of the faction divide in 9.0, how should they handle warmode? Should it become a free for all where any character not grouped with you is hostile? It would certainly solve the issue of the skewed ratio we have right now, just the question is what new problems would crop up with such a system.

I could see them basically switching War Mode to more of a free-for-all situation. It would definitely get rid of that whole faction imbalance that happens on some servers right now, and level out the playing field. But I think one of the larger concerns people have about this sort of thing isn’t necessarily mechanics so much as narrative.

Ever since the discussion about dropping the faction divide popped up, people have been wondering what exactly would happen if the factions just disappeared — what about PVP? But the thing is, the factions don’t necessarily have to be at war for PVP to happen. They could just be participating in war games to strengthen both sides, or there could be rogue elements out there that are still unhappy with former members of an opposing faction. Just because a leader says “Hey, there are bigger things to worry about, let’s all get along” doesn’t realistically mean that everyone is just going to poof suddenly hold hands and get along. Tensions are still going to be there.

Alternatively, War Mode and PVP really aren’t something that have to be a necessary part of the story at all. PVP has almost always been something in the background from a narrative standpoint, but it doesn’t need to be part of that narrative. Look at Pet Battles for instance — there’s all kinds of stuff going on with trainers and Pet Battle dungeons, but that stuff doesn’t really play into the main narrative at all. It’s just there as an activity for people to do. Not being part of the narrative doesn’t make it any less appealing to those who want to participate.

I am using a month by month subscription right now. If I buy the 6 months version will the 6 months be added on top of my current month or will it replace it?

Yep — it’ll just get added on top of whatever time you’ve already paid for. Instead of paying month-to-month, you’ll pay for six months in one lump sum, and when those six months are up, you’ll be charge for another six months. If you don’t want to make that change a permanent one, pay for your six months, and switch it back to month-to-month a few weeks before it expires.