Patch 8.2 brought us a lot of content, and it can be a little overwhelming figuring out what exactly you need to do to be ready for the new raid and what is more optional. Azshara’s Eternal Palace opens up on Tuesday, July 9. Normal and Heroic modes will open first, while Mythic and the first wing of Raid Finder will open the following week on July 16. The subsequent Raid Finder wings will be staggered through July and August. No matter what level of content you do, here’s how to be ready for when you step into the raid.

It always starts out with questing. In Nazjatar, we’re working with three parts that make up the main storyline that will “unlock” access to the raid. Obviously the first step is to open up the zone. This starts with the intro quest from Genn or Nathanos, leading to meeting your faction’s Nazjatar allies and setting up a base and culminating in Magni’s quest to unlock your first Azerite Essence.

The second step features leveling your bodyguard by completing the dailies that offer combat experience. When you get your bodyguard to rank 3, it then opens a questline to investigate the Naga. The third step is more involved and looks like it has timegating. To open it, you need to acquire 3000 total combat experience across any of the bodyguards (meaning you can choose different ones). It includes the 600 xp you needed to unlock the previous step, however, at the current cap of 300 xp per day, this requires 10 total days after opening the zone to unlock the third step. It’s unclear if that xp cap will always be in place — keeping the timegating — or if combat xp could be buffed later by increasing the amount from quests or adding more quests.

According to Wowhead’s Nazjtar guide, completing all three parts for the Sunken Ambitions/Unfathomable achievements will grant access to the Eternal Palace. Unfortunately we don’t know what the extent of that is and the devs have not confirmed anything about any attunement. Obviously it’s not going to completely block you from doing the raid, but it’s very likely that completing the achievement will make things easier — such as accessing the main raid entrance area, unlocking the flight point nearby, and even giving a raid quest. There is also a super secret and totally not creepy alternate way to get to the raid. 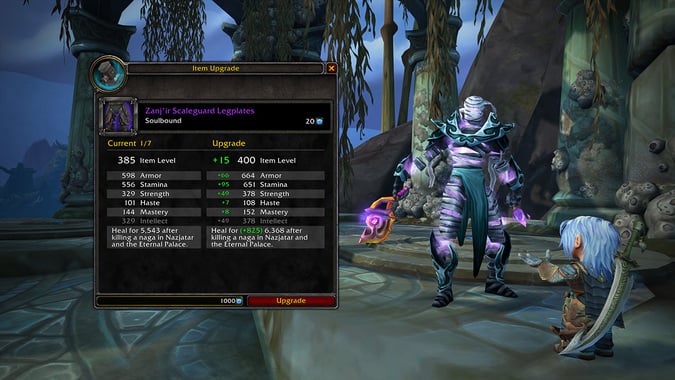 Gearing up with upgradeable Benthic armor

Patch 8.2 has a nifty upgradeable gear system to gear up your main or use as catch-up on alts. When you first start out in Nazjatar, you’ll receive a piece of Benthic gear to start off with, and you can acquire a couple more as you go — such as those from a reward cache for leveling up your bodyguard. You also have a chance get to Benthic gear from World Quest rewards, emissary caches, or even special events like the Murloc Traders. However, the most reliable way is by farming up Prismatic Manapearls and purchasing the gear tokens from either Artisan Itanu or Finder Palta for 5 Manapearls each. The gear starts at 385 ilvl and can be upgraded further by visiting Voidbinder Sturzah or Voidbinder Zorlan.

Upgrade costs scale with level and, after the initial upgrade, become progressively costlier the higher you go. Azerite Benthic gear can be upgraded twice — first from 385 to 400 for 20 Manapearls, and then again from 400 to 415 for 50 Manapearls. The non-Azerite slots can be upgraded as follows:

Benthic tokens are also Bind on Account, so you can send them to lower geared alts to get started. While the gear can’t Warforge or Titanforge, it can proc extras like sockets or tertiary bonuses. Benthic gear also has unique equip effects like increased damage, stats, or utility effects. Wowhead has the full list of gear and every effect they carry.

Speaking of gear, don’t forget to get your customizeable Pocket-Sized Computation Device trinket by completing Upgraded from Christy Punchcog after opening up Mechagon. You can customize the trinket by acquiring different punch cards from Mechagon and its dungeon (which opens with the raid).

Essences and your Heart of Azeroth

Azerite Essences are a new progression system for your Heart of Azeroth. You get your first Essence while unlocking Nazjatar. Magni shows up, calling you back to Silithus, where the quest chain will take you to the introductory Essence and also unlock the Heart Forge. The second Essence will come with completing the Nazjatar bodyguard quests. From there, you can acquire additional, better Essences from a whole host of activities. Wowhead has a list of where you can acquire every Essence and each of its ranks.

Most of the Essences won’t be available until the raid drops and Season 3 starts, but you don’t have to twiddle your thumbs while waiting for them. Essence traits are unlocked at seven different levels with your Heart of Azeroth, starting with the Major Power at level 35 and ending with a Stamina increase at level 67. The two Minor Powers unlock at level 55 and 65. You can get a head start on unlocking traits by leveling up your neck while you wait for the rest of the Essences to be accessible.

Going up against Azshara

When the raid opens, you’ll need to know what’s going on, right? Wowhead has a raid overview with strategies and tips for each boss written by FatbossTV. Right now only the first four bosses have guides, but the remaining four will likely be finished after the raid comes out and more concrete (non-PTR) data is available. For those who like minimalist guides, Dan from Turalyon made a spreadsheet guide based off PTR testing and the dungeon journal.