Where would you put your Guild Hall if they were ever added to World of Warcraft? What would be in it? 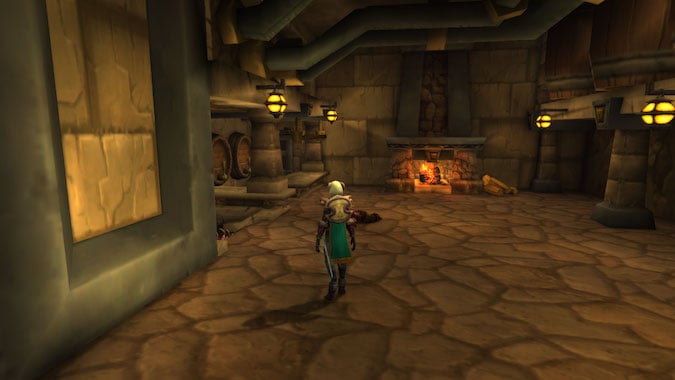 I was at the Thandol Span. The next step for leveling this character was Arathi Highlands. There is a dwarf outpost, Dun Modr, here. It’s been taken over by Dark Iron Dwarves and you need to do a clean-out of the town. This is the former inn. For those of you playing through WoW Classic, I remember the mailbox by the inn working during vanilla WoW even though there were Dark Irons all around. Considering the only mailbox in the zone was at Menethil, this was a big surprise.

Anyway, I went inside to kill the last of the Dark Irons I needed to complete the quest. It’s devoid of furnishings, although a fire blazes in the hearth. It struck me this would make the perfect location for a guild hall. We’d need a new profession — Woodworking — to make tables and chairs for the main area, and beds for the lower level.

Usually, in inns of this Dwarven design, there are trophy heads on either side of the fireplace. What a great place to hang Onyxia or Azshara‘s head to represent our conquests. There’s enough wall space, all those Legendary weapons we’ve acquired could hang there. The only time I drag out Thori’dal now is during The Burning Crusade Timewalking and that’s just for old time’s sake as the Legendaries from Legion are a step better for Timewalking.

Maybe we could hire trade and general goods vendors, a barkeep, and a cook based on how many people use the inn. Maybe we could purchase holiday items for decorating, like you can do with your garrison for Hallow’s End and Winter Veil. There probably should be a guild vendor to dispense all those goodies — shirts, toys, pets, mounts, tabards, etc. — you get from the vendors in capital cities. Those people wouldn’t go away. The person in your hall would be a supplement to them.

I don’t think you’d get quests here. You would get achievements for establishing a hall and maybe, being able to hire all the staff and keep paying them a salary. This would be strictly a place for a guild to hang out. I’d finally get my long-wanted guild bulletin board. We’d need personal and guild bank access. In the case of the above building, we have the occasional Dark Irons materializing and causing havoc, but they are nothing we can’t one-shot and drag to the span to toss in the water. Provides entertainment, you know?

So, let’s play “What If?” What if you could have any place to be your guild hall — where would it be? And what would you like to see your guild be able to do in said hall?

Blizzard Watch is made possible by people like you.
Please consider supporting our Patreon!
Filed Under: Breakfast Topic, Guild Housing, Guilds
Advertisement