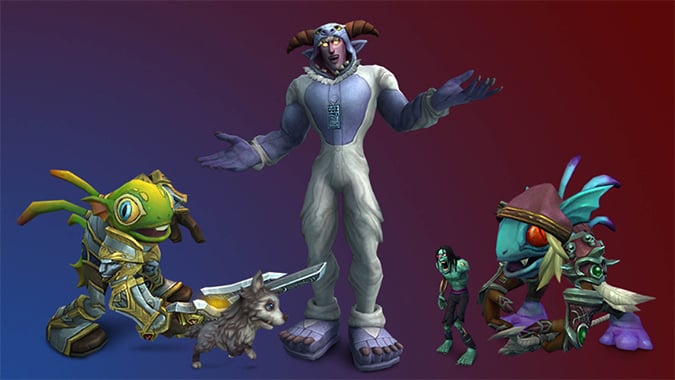 The BlizzCon 2019 Virtual Ticket is now available to purchase and with it comes a bunch of in-game stuff for WoW, Overwatch, Hearthstone, Heroes of the Storm, StarCraft 2, and Diablo 3.

As with previous years, the BlizzCon Virtual Ticket costs $49.99 and gives you access to all of the streams during the event. That means you can watch game-specific panels and Q&A streams that won’t be available on the free broadcast. You’ll also be able to replay the live streams after they’ve aired up until March 31, 2020.

Most of the in-game loot that comes with the Virtual Ticket won’t go live until sometime around December 31, 2019. This is not how it happened last year, where a handful of things went live as the tickets were available. This year, only the Overwatch skins will be available before the show.

Overwatch players on both PC and consoles will receive two Legendary skins: Illidan Genji and Tyrande Symmetra. Both skins are pretty elaborate as far as cosmetics go. Genji doesn’t seem to have the proper Warglaives of Azzinoth, and Symmetra isn’t rocking the same garb as Tyrande does in the retail game, but it’ll do.

Level up your #BlizzCon home experience with Virtual Ticket!

Bring a piece of BlizzCon with you into whatever world you call home, and mark the occasion in-game alongside your friends, allies, teammates, guildmates, broodmates, and rivals.

A BlizzCon 2019 card back will be given to Hearthstone players, and a draw at a mysterious Golden Legendary card.

In Heroes of the Storm, you’ll get a BlizzCon spray and portrait, and a Celestial Deepcrawler mount.

Unfortunately, we don’t know exactly what Diablo 3 PC (not console for some reason!) players will get. The product page for the ticket only says they’ll get a pair of wings and that more details will come at a later date.

The Virtual Ticket includes a lot of stuff this year, but it’s disappointing that most of it won’t be available until after the show. WoW Classic also got nothing, but it seems like Blizzard isn’t interested in adding anything that wasn’t originally in the game, so this probably falls under that umbrella, too.