Diablo 4 First Impressions: This is a hell of a game 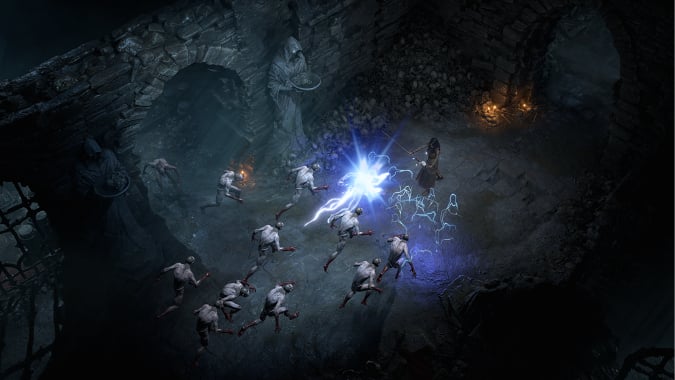 Diablo 4 is a fascinating game. At BlizzCon, I’ve had a chance to play both a Barbarian and a Druid in 10 minute increments. The demo starts you off in the middle of a sunken crypt finding a magical lantern, smash your way through a lot of corpses, and then bring the lantern to the local town chief who reveals that… well, the details don’t matter so much as the fact that it leads you to another crypt and whole lot of new monsters for the Diablo series.

In terms of how it plays, it feels very much like a hybrid somewhere between Diablo 2 and Diablo 3. The Skills system feels very D3, but the talents are definitely hearkening back to D2. The game felt paradoxically nostalgic and brand new at once — you’re doing things that are very Diablo, but the way they look, the smoothness of the combat flow, and the utter beauty (even the twisted beauty of the crypt and catacomb you find yourself in for the demo’s fairly short 10 minute run time) are haunting reminders that this is a modern Diablo game. This is Diablo in 2019, and it shows. 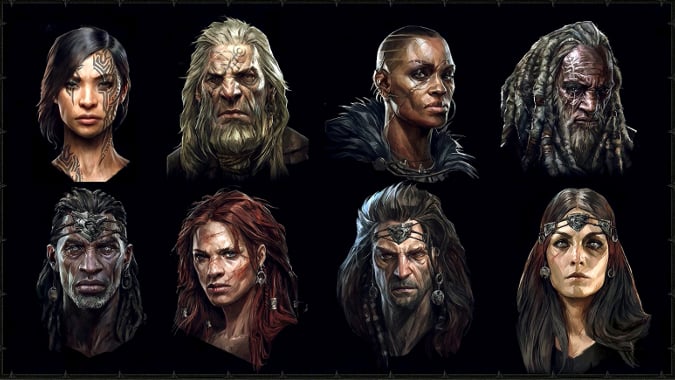 The road to hell…

You couldn’t change your skills during the demo, so my Barbarian and Druid both ran with the stock skill set-up. But that worked fine — I was quite satisfied with the carnage as I romped my way through demons. The Druid had a host of abilities that were essentially on-demand shapeshifting: a short range attack spirit generator that transforms them into a Werewolf for a limited time and a big damage button that blasts everything around you with while shifting you into a mauling Werebear. There was a skill that summoned a rolling boulder that I used often, a big AOE storm with tornados, and a trample attack that let you shapeshift and run right over your enemies. Also, the Druid had two wolves accompanying him on his way through the dark, monster-infested underground.

There was a certain amount of customization — I picked through several looks before I found the Barbarian I wanted, and I was pleased with her tattoos and animations, especially on her face. The Barbarian is of course a perennial favorite of mine and it played fairly closely to how it plays in Diablo 3, but there were some changes. Your Barbarian ends up equipping four weapons in total. You have a big smashing club and 2-handed sword for specific skills, and two 1-handed weapons for attacks like Frenzy. It was still based on fury and had a berserker frenzy cooldown, a leap attack, and general chaos and mayhem in the Barbarian’s general idiom.

I was surprised, pleasantly so, at how well they’ve managed to update everything from the graphics to the gameplay so that it feels very Diablo and yet looks and plays nearly seamlessly between the cinematics and the game itself. The game zooms in on your choice of character and puts them through lavishly rendered scenes and then transitions back into the isometric gameplay the series is infamous for, with pure fidelity. Both the Druid and the Barbarian played with their own unique flavor and yet were fast and brutal, and my immediate neighbor reported loving their playthrough of the sorcerer as well.

The little bit of story I got to experience lives up to the hype at the convention’s reveal — this is an exceedingly dark story. Things are bad for the people you meet and then they get worse. It’s extremely graphic and unsettling. If you were one of the people who felt like Diablo 3 was too colorful, Diablo 4 looks like it’s going right back to a grim, splatterpunk aesthetic and a sense of high stakes.

You’ll always be just a razor’s edge from failure.

Diablo 4 doesn’t reinvent the wheel, it just runs things over with it

It’s hard to evaluate a game with just 20 minutes of playtime, but what I saw felt promising and looked pretty close to finished. Diablo 4 is beautiful — I’m actually a little worried about how it’ll run on my fairy old PC, to be honest. In terms of how it looks and plays and the UI, it definitely felt like an evolution of Diablo 3.

Honestly, if the demo hadn’t ended at 10 minutes, I’d still be there playing it. It feels extremely polished and astonishingly satisfying — if you liked the basic formula in Diablo 2 or the slightly more complex Diablo 3, I think you’ll like this game. The fluidity of combat really sticks with you – even now, an hour after I played it, I really have a warm sense of satisfaction in how it all went down. It’s very, very good.

In terms of loot I noticed a somewhat more boisterous rate of legendaries than I expected. My Barbarian got a legendary ring that dropped lightning circles on the ground while my Druid got a legendary staff. It’s hard to compare but it generally felt like the gearing system was much more akin to Diablo 2 than its direct ancestor. I very much enjoyed that.

But there’s also a lot I didn’t get to see. Does it import Torment levels? What kind of replay mechanics will it have? What really is the story even about past the broad strokes? But the Diablo team has absolutely nailed the addictive feeling of this franchise at its best. It’s just hard enough at the starting level to be challenging without feeling punishing, which is a good sign.

Overall, I’m very optimistic. It feels like the best of its predecessors distilled, with the addition of modern graphics. It looks and feels very good. I’m so eager for this game now.

Blizzard Watch is made possible by people like you.
Please consider supporting our Patreon!
Filed Under: Diablo 4, Diablo 4 First Impressions, Diablo 4 Gameplay
Advertisement