Year of the Dragon is coming to a close, so just what is the next Hearthstone expansion? 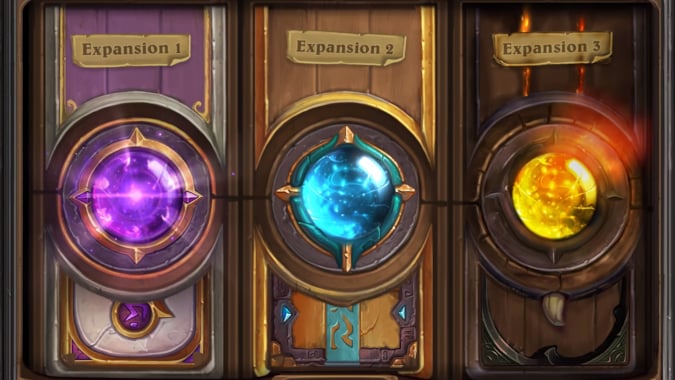 Update: We finally know what the third expansion fo the year is, and it’s dragons. So many dragons.

Most players anticipate the third and final Heathstone expansion in the Year of the Dragon will be announced at BlizzCon. But what will be? Back in June, I enlisted the aid of Chromie to see the next expansion. While her jaunt through the timelines was fun, she’s not returning my messages this time. We’re on our own in figuring out the next expansion.

The only clue we have is the preview image showing all three expansions, the style of which hints at the expansion’s theme. We now know the first two: the purplish orb of the first expansion hinted at the general color scheme of Rise of Shadows, themed around Dalaran. There’s little in the greeninsh orb to hint at Saviors of Uldum, an Uldum-based expansion. The coloration of the third orb is an orangish color that hints at fire. There’s a tooth or claw extending from the bottom of the orb and two molten lines extending up.

Rise of Shadows gave us a lot of Dragon cards: Bronze Herald, Nozari, Kalecgos, and Brightwing were all added. But Saviors of Uldum gave us exactly zero dragons. It’s called the Year of the Dragon. This has got to be the dragon expansion, right?

As Lee Corso might say, not so fast, my friend.

A return to the Frozen Throne

Saviors of Uldum provides call backs to Journey to Un’Goro with both Quest cards and the re-introduction of the League of Explorers. If we’re going through Hearthstone’s greatest hits, the expansion after Journey was Knights of the Frozen Throne which introduced the Hero cards. Will we see Hero cards return in the next expansion as Quests did? The game currently has three Hero cards in Standard: Hagatha the Witch, Dr. Boom Mad Genius, and Zul’jin. Hagatha doesn’t see much play anymore but Dr. Boom and Zul’jin remain popular.

At first, I dismissed the idea of an Icecrown expansion because of the preview picture. Icecrown evokes more of a blue palette. But the more I thought about it, the more probable it seemed. Blue would with fit with Arthas’ Lich King. Bolvar’s incarnation of the Lich King evokes the fiery colors we see in the preview.

The biggest issue with a second Icecrown expansion is finding new and exciting characters which weren’t introduced as cards in Knights of the Frozen Throne. Technically, this would be the third Icecrown expansion as The Grand Tournament is also set there.

While there are still plenty of characters left in Northrend, Team 5 — the Blizzard development team responsible for Hearthstone — hasn’t been shy about creating new characters, either.

Ever since the preview image was released, players have tagged the third expansion as being themed around the Bronze flight. The color scheme and the claw plus the Year of the Dragon naming all point to this conclusion. Two of the four dragons added this year have been Bronze Dragons. One is even called the Bronze Herald further solidifying the idea that a Bronze Dragon themed expansion is coming.

The heroes of Azeroth could once again be called upon to safeguard and correct the timelines from Bronze’s nemesis: Murozond and the Infinite Dragonflight. Nozdormu is already a Legendary. Chromie was a temporary card during the Taverns of Time event and would certainly be a Legendary in a Bronze Dragon expansion. Soridormi, Anachronos, Zidormi, and Kairoz are all good candidates for new cards. The bosses from the End Time dungeon would also make good fodder for Legendary cards and the trash mobs are candidates for other cards.

Murozond could also be a Legendary as well as the final boss of the single player adventure.

In the Year of the Dragon, the story has continued from Rise of Shadows and into Saviors of Uldum. Players expect the story will continue and reach its climax in the third expansion. Thus far, the League of E.V.I.L. has stolen Dalaran and flow it to Uldum.

Spoilers for the end of Tombs of Terror to follow.

The final boss of Tombs of Terror is Tekahn, a Tol’vir Warlock. One of his cards is a 10 mana spell called “The Final Plague ?!” When cast, it summons all four Old Gods: Yogg Saron, C’thun, Y’Shaarj, and N’Zoth.

After you defeat Tekahn, Reno says “The Final Plague is unleashed? What did he mean by that?”

Brann replies, “I get a feelin’ this ain’t over just yet.”

It isn’t, because one more expansion is yet to come. 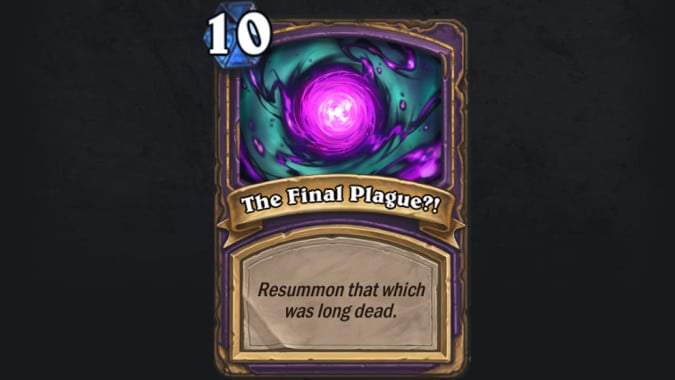 If you look back at The Dalaran Heist in Rise of Shadows, you see a hint pointing to Uldum. One of the Level 7 bosses is Ol’Toomba, and if you play Elise against him, he has a line that says, “Elise! Thought you was out in the desert still?”

It seemed innocuous enough at the time, but it was actually a hint that the next expansion (Saviors of Uldum) was headed to the desert.

In the same way, Reno’s line highlights The Final Plague and points to the next expansion in a much less subtle way. The League of E.V.I.L. is led by Rafaam, an Ethereal. The Ethereals are closely associated with the Void. Rafaam recruited Madame Lazul. We first saw Lazul in the Whispers of the Old gods trailer, and several of her scenes show tentacles hinting she may be a Faceless One who has chosen to appear as a Troll. Faceless Ones are known as Old God minions.

Perhaps the League of E.V.I.L.’s true goal is to bring back the Old Gods and usher in the Hour of Twilight. For that, the Old Gods will need their greatest minion.

Deathwing is already a Legendary card. Actually he’s two: Deathwing and Deathwing Dragonlord. There’s nothing to stop Blizzard from making yet another Deathwing Legendary called Deathwing the Destroyer. This expansion would also dovetail nicely into what is currently going on with the story in World of Warcraft, where once again, the world seems to be ending.

The only thing we know for certain is that there’s more of this storyline. Like Brann said, this isn’t over yet.