Once again the folks at Wowhead have datamined up a crucial piece of information: namely the voice files of Highlord Darion Mograine and the Lich King himself, Bolvar Fordragon, that are part of patch 8.3‘s change to allow Death Knights of every Allied Race and the Pandaren. And once again we take a look at this datamined information and think about what it means with all we know about both the Legion Death Knight Order Hall campaign and the coming expansion Shadowlands. It seems that Bolvar wasn’t as unprepared for Sylvanas’ move as his showing in the cinematic made it seem.

This post contains what may be spoilers for patch 8.3. Though this seems relatively set in stone in terms of narrative intent, because it is datamined information it’s subject to change. Proceed at your own risk — much like a Death Knight. 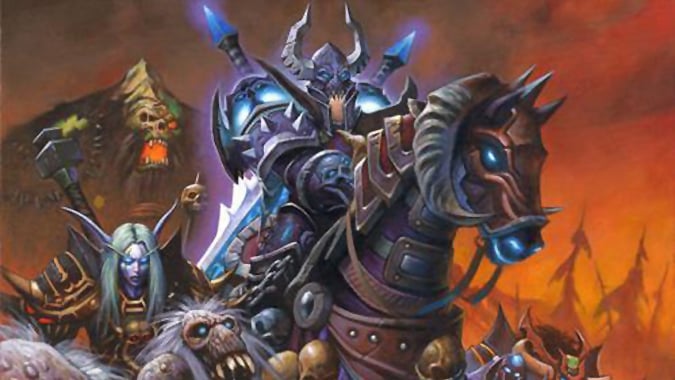 What lies beyond death

After Legion, we saw the Lich King take steps to consolidate control over the Death Knights, raising a new Four Horsemen to serve him, including Highlord Darion Mograine who had previously been a bit hesitant to accept Bolvar. By the end of Legion, however, Darion was one of the Four Horsemen and a direct agent of the Lich King, and that role seems to be continuing here in patch 8.3. The dialog from both Bolvar and Darion is in accordance with this idea.


What I find interesting in this dialog is how it informs us on how Bolvar is a very different Lich King than Arthas or Ner’zhul were. He thinks specifically in terms of duty and the price one has to pay to safeguard the living, even though they’ll never appreciate the cost or how much they require the aid of the Death Knights. It’s a completely different approach and honestly it’s not surprising that Bolvar wasn’t as prepared for a direct assault as Arthas was, nor was he as terrifyingly powerful in direct combat because he doesn’t see his role to be a ruler, but rather a steward. Remember, Sylvanas and Arthas faced off in the Halls of Reflection and she barely survived… but that was before Edge of Night and her bargain with the Jailer, as well —

In life, you were a hero to your people. For their sake, you made the ultimate sacrifice. But your duty to Azeroth is not yet complete. More is demanded of you… a price the living cannot pay. This is the hour of your dark rebirth. Death’s power grows. Rise… and become my champion.

That’s very interesting because it’s at once less sinister and more disturbing. Bolvar sees becoming a Death Knight through the lens of his former life — Death Knights are champions, guardians, those that literally give up everything including their very lives to safeguard others. He uses Arthas’ methods, but to a different aim.

Meanwhile, we have Darion Mograine, who seems to simultaneously serve and yet maintain some of his individuality. His words are not those of a puppet.


Mograine’s focus is even more on the cost of being a Death Knight and the responsibility of using the power gained through it than the Lich King himself.

Dire times call for new allies. You come from a strong people. No doubt you will serve the Ebon Blade well. It seems the Lich King has sensed the same truth as we have. That a rising threat stalks us from the shadows, and that we must bolster our ranks to face it.
There is little time for ceremony, $n. Take up your blade and prove your mettle. Conquer the darkness. Become its master. Many in this world will fear you. Revile you. But they need you, more than they know.
Go forth and claim your destiny, death knight. And through all the trials you endure… suffer well.

The line it seems the Lich King has senses the same truth as we have definitely implies that Darion still considers the Ebon Blade somewhat separate from Bolvar and the Scourge, even though we know that Bolvar will be at the head of the Ebon Blade in Shadowlands.

This has me wondering — did Bolvar want Sylvanas to destroy the Helm of Domination? He used its power to create new Death Knights, but left them with Darion instead of keeping them all at Icecrown in preparation for the attack that it now seems he sensed coming. Was he aware of her pact with the Jailer? Did he know that her power was bolstered by that entity’s having seized the souls of the dead from the war and that a direct confrontation with Sylvanas would have been too costly?

Both Bolvar and Sylvanas are tacticians, generals, strategists. This all feels like an outflanking maneuver to me. Let your enemy execute their strategy in order to learn what it is and how to counter it while building your reserves up out of sight, so that once you know what is going on you have forces on the field to counter it. If the Shadowlands have been broken and the Jailer has been stealing souls that aren’t supposed to go to the Maw, then perhaps Bolvar and Darion realized that the only way to fix it is to let Sylvanas make a path for them to invade the Shadowlands in force. When Darion says It seems the Lich King has sensed the same truth as we have. That a rising threat stalks us from the shadows, and that we must bolster our ranks to face it I immediately think about how Bolvar and Darion might well work in concert, if Darion finally has in Bolvar a commander he can respect without serving blindly.

I surely do not know, but the fact that both Bolvar and Darion reference Arthas — with Darion doing so directly, saying Go forth and claim your destiny just as Arthas once did to his Death Knights — is interesting to me. It definitely feels like there’s a feint going on here, and the fact that we’re going to learn more about the origins of Frostmourne and the Helm of Domination in this expansion makes me wonder if Bolvar is planning on remaking one, or even both, in Torghast somehow.

One thing’s for sure, in patch 8.3 we’ll get to see the first step into Shadowlands when the Lich King starts recruiting new Death Knights for the Ebon Blade. This feels like a natural evolution of what we saw back in Legion, and we’ll see how this all shakes out in Shadowlands.