Pet battle changes coming in 8.3 means some of our favorite fuzzy fighters may face retirement 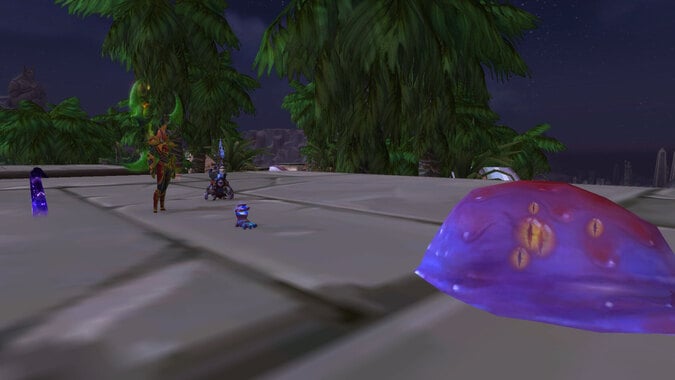 The fight to save Azeroth from N’zoth is going to take everyone working together — even our smallest companions. While they won’t be attacking N’zoth directly there have been some changes announced for the patch 8.3 pet trainer battles. There are a few changes being laid out here. Pet Battle trainers will scale to your highest level pet on the team, so if you go into battle with a squad of level one pets you’ll wind up fighting level one enemies. There’s a new weather effect coming called Toxic Fumes that will make damage over time teams happy, and buffs coming to the Blizzard and Mudslide weather effects. And finally, there are some major nerfs coming to some of the go-to pet battling teams.

The scaling change to trainers is going to make a lot of people who don’t pet battle very often happy. The pet battles in Nazjatar and Mechagon both awarded a nice little bump of faction rep the first time you did them. Having that extra 2500 rep scattered around Nazjatar and Mechagon was nice to help unlock my flying. The new reputations won’t be necessary for flight, but there are lots of shiny rewards at Exalted that I’d love to get my paws on. Since the new pet battles are doable with level one pets there’s going to be no barrier to entry. Chances are that over the course of your time in World of Warcraft you’ve collected a handful of pets from holidays, as quest rewards, or even by pugging, and if you don’t have the right ones you could ask to borrow some from a friend. 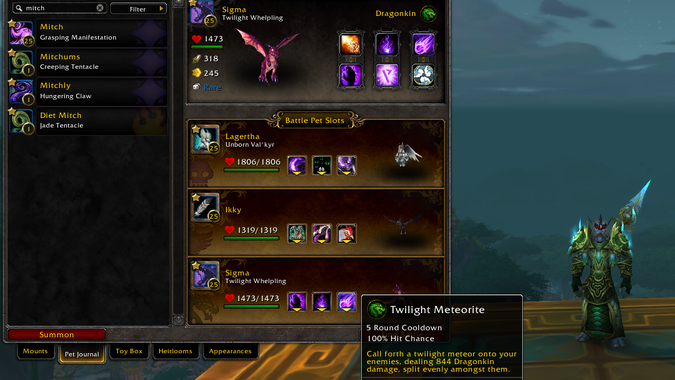 Who knows, you might even get hooked on pet battling and decide that you want to delve a little deeper. I used to pet battle all the time in Mists of Pandaria but hadn’t really done anything except collect for the last few expansions. Then I tackled the trainers in Nazjatar and I remembered how much fun I had figuring out the best teams to beat each legendary pet, and now I’m capturing wild pets and delving into the pet battle dungeons alongside the best of them.

One thing that quickly became clear with my return to battling: there are a few pets that can absolutely trivialize any legendary encounter that you’re working on. Combining pet abilities for syngery isn’t anything new, and is definitely encouraged, but the combination of abilities that can be levied by the Unborn Val’kyr and swarming pets like Ikky or the Zandalari Anklerender is a little too strong.

In a future update, we’re targeting a number of balance changes we want to make, which will amount to lowering the effectiveness of some pets and strategies. Again, these changes will not be happening in Visions of N’Zoth, but we wanted to give you ample warning time that changes are coming. While we don’t have specific numbers or details to share right now, here are some examples of abilities that we’re going to take a close look at:

Of course that last one isn’t an ability, but Hermit Crab incorrectly has a higher stat budget than it should, and it will have its stats reduced to bring it in line with other similar pets.

A goal we have when making many new pet battle World Quests or encounters is to create puzzles that players can counter and “solve”– ideally with the option to use a variety of pets and tools to do so. When a few pets have such strong synergies that they can deal massive damage in just a few rounds and almost trivially beat these enemies, it becomes problematic. Do we make new challenges only beatable by the highest damage combos, or do we make them generally solveable and therefore immediately smashed by massive damage?

We don’t want to ruin the feel of combination abilities, so we aren’t going to make Black Claw no longer interact with Hunting Party or Flock, but we want to make sure these abilities are dealing appropriate damage. And we want to make sure that secondary effects such as Shattered Defenses are being accounted for with regards to balance.

We don’t know when these nerfs will be happening yet. It doesn’t sound like something that is ready to go for patch 8.3, but if you’ve been relying on these combinations you might want to make sure that you have a few more teams leveled up for when the change does go live. Maybe we’ll see a change from requiring the massive damage to having to bring a team that can interrupt high hitting abilities or mortal strike effects. There are a ton of abilities in the pet battling tool chest. I’m hopeful that we’ll see some really interesting strategies come out in Shadowlands.