For example, we know Tiffin Ellerian Wrynn, Varian’s queen and Anduin’s mother, was a figure of great importance during the reconstruction of Stormwind. Tragically, she died in the Stonemasons’ Guild riots that resulted from Katrana Prestor’s manipulations, sending Varian into a depressive haze and leaving the very young Anduin without his mother. But even though we know the end of her story, there are so many interesting parts of it we don’t know. What was her family’s standing before joining the House of Nobles? What was her courtship by Varian like? What was her relationship with Katrana Prestor? 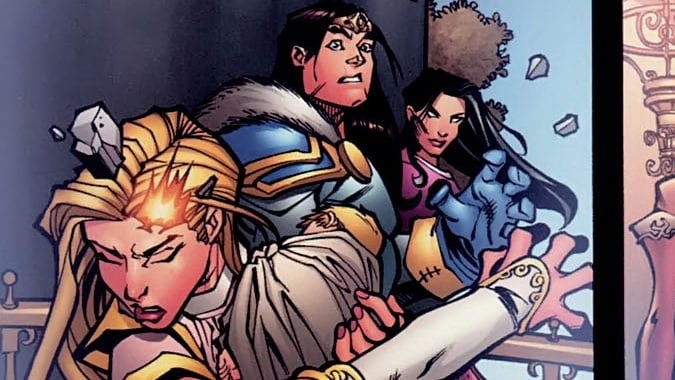 The panel in the World of Warcraft comic (Issue #13) where we see Tiffin struck by a rock has Katrana in the background, looking on in a sinister manner. Onyxia, as a black dragon, had magical power not just to influence and manipulate, but raw power over earth itself. Did Onyxia murder Tiffin rather than merely orchestrating the circumstances that led to her death?

Enough of conspiracy theories, though. Even if none of this happened, Tiffin was still a key character for both her King and her son. I would love to see her story not just for the sake of filling in a hazy space in the history of two of the franchise’s principal heroes, but to see her as a hero as well. Even with a tragic ending, there’s so much to Tiffin’s character that begs to be revealed.

This story is one of dozens that exist in the margins of the chronicles of Warcraft and are just begging to be told. What’s your favorite?