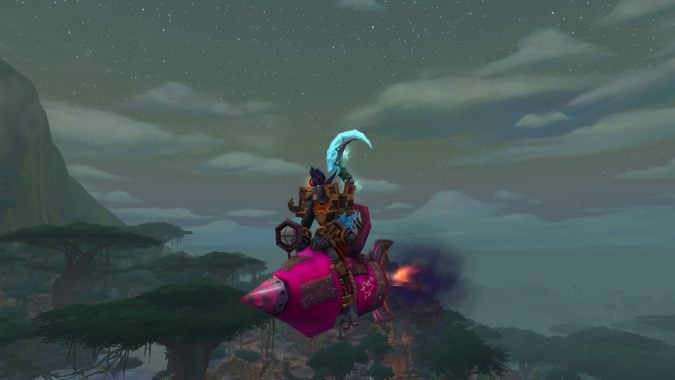 We’ve hit the start of the Love is in the Air event, and every year this event rolls around I get my rocket out and am just so very happy that I don’t have to get it anymore. I wasn’t tracking how many characters I was taking through each day, but it was a lot. Since back when I got it, you could still earn the mount on any character who could queue into the dungeon.

According to World of Wargraphs, the Big Love Rocket has only been collected by 1.9% of the player base in World of Warcraft. That’s a full 1.1% higher than the Felblaze Infernal that drops from Gul’dan in Nighthold, and you can farm him year-round!

So don’t give up hope! I believe in you and I’m rooting for you all! By this time in three weeks, I bet that above 2% of the player base will have their Love Rockets!

But until then — let’s Queue!

YEEOGNGN YEEOGOGNOR PUNCHED THE BURSAR
Q4tQ: Rank your favorite Old God encounter: C’thun, Yogg, N’zoth…who strikes terror into your hearts still and who is a sad finish to an expansion?

Yogg-Saron is by far the scariest of the Old God fights. I remember wiping to it long after it was relevant content during Wrath of the Lich King. The sheer amount of stuff happening all at once was my raid’s biggest hurdle. Managing debuffs, sending a squad into the brain, making sure you could get to your connected person. I still get nightmares to this day!

I like the N’zoth fight too though! The Psychus phases are neat, and watching your whole raid as they get dragged across the room won’t get old. Plus there are giant lasers! All of the best fights have giant lasers.

MAALIN IS NOT THROWING AWAY THEIR SHOT

Q4tQ: Just to be sure because I’m extremely loathe to waste an otherwise successful run (lessers anyway): In a lesser vision, once I’ve completed the daily objective, if I die or run out of sanity do I still get credit for the daily? In a Horrific Vision, if I complete a side area and then die or run out of sanity, elsewhere do I still get the quest item for upgrading my cloak? Thanks.

Yes to both! If your quest in the lesser vision was to close 3 Void Rifts, once you’ve closed those three rifts no matter how you leave the Vision you’ll keep your credit. You can die, run out of sanity, or just go back to the portal and leave on your own. So feel free to spend as much time in there as you want if you’re looking for extra Coalescing Visions or Mementos.

During Horrific Visions any wing you clear you’ll get to keep the box from. So if you go in and clear the Dwarven and Trade Districts out, and then die before getting to Alleria, those boxes from the wings will still be there with the rewards from the areas. This is great because after reaching cloak rank 5 all of the cloak upgrades to reach level 12 will come from the side areas.

After that nobody really knows for sure, but speculation is that you’ll need one of the hardest Lost Areas boxes. In Stormwind, those are from the Mage Quarter and Old Town, and in Orgrimmar those are the Valleys of Honor and Wisdom. But by then your cloak will be providing you 65 protection to your sanity so that should be within the realm of possibilities.

MUSEDMOOSE MAY NOT LIVE TO SEE GLORY

Q4tQ: did you know that Blizzard Entertainment and Blizzard Watch were founded around the same time of the year?

I didn’t! But that’s neat to know! This was mostly just an excuse to plug the fact that it’s our 5th anniversary and we have new shirts!

Also to say a super big thank you to all of you supporters who make Blizzard Watch possible! You’re the real MVPs!

I’M KALCHEUS, FRIEND. LET’S HAVE ANOTHER ROUND TONIGHT

I think that in the right hands you could see a fighter use maces in a more agile fashion rather than just bashing about all willy nilly. Just look at Jackie Chan, I’m almost 100% positive that I’ve seen him use a hammer in the middle of a fight.

Think of it more like knowing where you should place your blows for maximum impact, and then getting your weapon around their defenses so that it can strike there.

Oh and Enhancement Shamans should get to use swords, and two-handed maces should flex between agility and strength so that I can get them again on my Bear.

ELAINE DE SHALOTT YOU’LL BE BACK

So is there consensus that the correct name is Bitey McStabface?

When I asked what everyone chose as their name for their pet it was the most popular name! And therefore the most correct. He just feels like a Bitey McStabface, you know? Reginald is a good second place choice.

What did you name your Shadowbarb Hatchling in #Warcraft

SPENCER MORGAN WILL SEND A FULLY ARMED BATTALION TO REMIND YOU OF MY LOVE!

Q4tQ: how many love letters has Mitch wrote to Sylvanas?

Do you remember that scene from Miracle on 34th Street, where they bring in the bags and bags of letters that kids had written to Santa Claus? Mitch has written that many in the last week.

ENO IS ERASING THEMSELVES FROM THE NARRITIVE

QftQ: If there was an entire continent revealed on the other side of Azeroth for a later expansion, what sort of animals would you want it to have? Variations on koalas and kangaroos? Or something else?

Kangaroos could be cool, especially the Warcraft version. Imagine them, taller than giraffes and made out of trees or rocks. Let’s get really weird, cats and dogs the size of hippos, and hippos the size of bigger hippos! But make elephants tiny.

Build a whole expansion around trying to figure out what sort of magical shenanigans have been going on over there. Maybe there’s a Forest God who’s just been going a little bit mad and just making animals a tiny bit weird.

Today’s Anna Earworm™: The entire Hamilton soundtrack. Just all of it.

Did you see the news about them releasing it as a movie in theaters? As someone who doesn’t live in New York, this makes me exceedingly happy. Make sure you leave Anna lots of questions for tomorrow!

Have a great Monday and good luck!