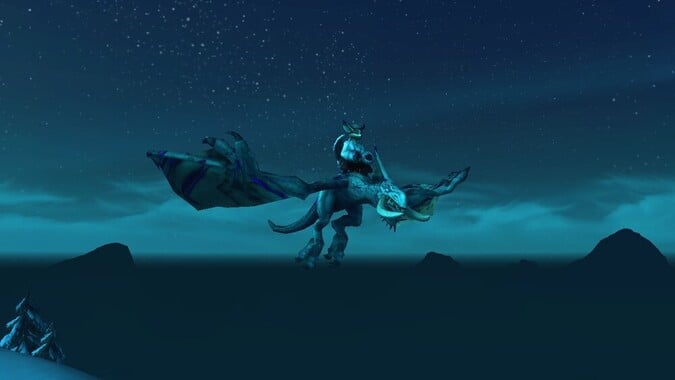 Ever since Legion my Druid has been using the Class Hall Travel Form — the big giant owl. I’m not a fan of the big giant owl. I don’t like the way the neck bends almost 90 degrees up, and I’m not a fan of how large the owl is. Pretty much the only thing I really liked about it was being able to carry someone on my back. You never know when an instant-cast passenger mount is going to save the day after all.

Who knew that they added a Glyph that would change that for me? The Glyph of the Humble Flyer gives you back your basic travel form, but still lets you carry people around on your back! I have no idea when they added the glyph, but I’m very glad they did. I haven’t even looked at a list of Inscription glyphs in so long I could be missing out on other great glyphs that they snuck in. But before I go make some scribe on my server richer than astronauts — let’s Queue!

YARMET HAS NEVER HAD TO KNOCK ON WOOD

Questions for the Queue: Why am I doing all of this again?–Now I’m not asking out of boredom, or grief with the game, or anything like that–I’m actually still having a blast with 8.3 content. But I realized that I don’t really have an agenda or goal list or “gaming philosophy” with this patch.

Prime example: the Wrathion cloak: I do stuff in the Vale and in Uldum to get the currency that lets me buy the vessels that let me do the visions that get me the currency that fills out my talent tree cloak stats so that I can grind for another mount. But beyond that, does maxing out the cloak profit me in others ways?–Will it help me going in to Shadowlands? Does it make running Island Expeditions or Warfronts easier? Will it help me reveal who mesmerized Vol’jin into picking Sylvanus? And if it does not contribute to any other goals, is there really any reason to be doing it on alts, or should I concentrate my cloak-improvement activities on one toon and let the rest prioritize other things like hunting alpacas?

Well to answer your first example, increasing the power in your cloak does also increase its item level by two points each time you do it. It already starts pretty high so depending on how much you plan on playing your characters going into Shadowlands, maybe that’s enough. Being stronger always helps, but earning your tickets into Horrific Visions is pretty time-consuming. I’m barely keeping up on two characters, and it’s a lot of dailies.

More generally that’s a tough question. Nailing down your goals for a patch can be tricky. I have some friends who focus on obtaining at least one of everything, so they’ll camp rares and hunt for pets on multiple teams of characters. Others chase just one specific thing at a time like the Big Love Rocket and will run it hundreds of times during the event.

When I’m making my own goals I make sure that I’m not spending too much time on something that I find not worth it, or no fun. I’m not going to send all of my characters after a rare that only drops a toy. I will swing by where they spawn because it’d be neat to have, but not so neat that I’m spending an hour+ a day trying to get my hands on it.

Or maybe you don’t really need a goal. It sounds like you’re having fun doing the Assaults and other 8.3 content so maybe that’s enough? Goals might be important in hockey, but in video games, you can feel free to be aimless and let Herbalism pull you way off course. (Unless it’s a hockey video game, then goals are very important)

In that same vein, don’t be rigid even if you’ve set a goal. You never know when something more tantalizing might present itself. The other night I was trying to rush my alt through a Horde Invasion in Stormsong when I got on a really good Alliance killing spree. Next thing I knew I was being offered the quest from N’zoth. All of a sudden my priorities shifted and I spent the next hour trying to prove my worth to my favorite Old God. I didn’t end up getting it done thanks to a nosy Fire Mage — but I did have a blast in the trying.

BUT FUZZYBUNNY KNOWS SOMEONE WHO HAS

Q4tQ:
What would you think of Henry Cavill as Arthas?

I think he’d make a really great Lich King Arthas. He’s more than got the right build to fill out a cursed suit of armor, and we’ve seen how great he looks swinging a sword with long white hair. I don’t know that I’d buy him as Prince Arthas though. He feels just a little bit too old.

If there was going to be another Warcraft movie or tv show, I don’t doubt that Henry Cavill would be working really hard to get cast in it. He’s a huge Warcraft fan after all. We just need to find the right script and Director!

Q4tQ: Which NPC do you think is most likely to get the final Kill Steal of Shadowlands?

In a huge surprise — it’s going to be Nathanos.

Actually… probably not, I doubt that he survives to the end of the next expansion. I’d put all my money down on one of two choices. A Naaru, or Anduin. Whoever it is, it’s got to be someone who wields The Light, how else are we going to get rid of all those shadows?

ELAINE DE SHALOTT IS GLAD THEY HAVEN’T YET

Do any of the queue writers besides Liz play Hearthstone?

I haven’t played Hearthstone in many many years. I just don’t have the collectible card game hankering like I did when I was younger. Plus not actually being able to physically hold the cards really limited how much I could get into playing. Sometimes it’s just nice to be able to hold that Magma Rager you’re about to play.

That being said, I love everything else around Hearthstone other than actually playing. The art is fantastic. I love their tweaks to things we’ve seen in Warcraft — like the Mean Streets of Gadgetzan expansion. How cool would that have been as a Warcraft patch? The most! I especially love all of their trailers and the catchy music they come up with. Even when there was a trailer that didn’t have a song, Ben Brode stepped up and provided one all on his own!

KALCHEUS BRONZEBEARD IS SURE IT ISN’T GOOD

Q4tQ: With Arthas potentially playing a role in Shadowlands, do you think Blizzard will bring to the story forefront living figures from his past (such as Muradin, Jaina), or do you think they’ll focus on personages like Uther and Terenas who have not had “screen time” lately?

Muradin and Jaina dealt more with Arthas while he was alive, I think we’d be more likely to see larger figures from his death. Uther and Teranas would be great choices if they were going to try and redeem his soul.

I don’t think I hate the idea of trying to give Arthas some redemption in the afterlife. Sure he was a bad guy, but a lot of that was under the control of the Lich King. I’m not saying that I want a scene where Ghost Arthas saves us at the end of a raid, but giving the guy a little bit of peace in the afterlife isn’t the worst thing in the world.

Todays Anna Earworm™: The Impression That I Get

Let’s take a trip back to the Ska filled heyday of the late 90s! Make sure that you leave lots of questions for Anna while you’re searching for the right checkered tie and pork pie hat to wear!

See you next week, unless you see me sooner!