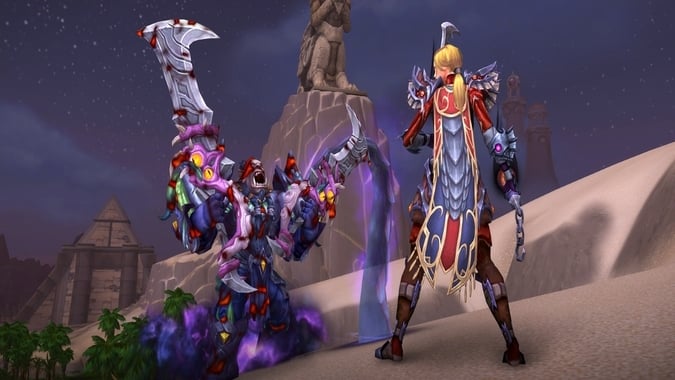 My Guardian Druid finally got his hands on a piece of gear with Twilight Devastation. This was a huge deal, I was really excited! I have over a million health when fully buffed, so doing even 6% of that in a single hit is gigantic damage. Everything was finally coming together! I was going to do all the damage in dungeons and everyone would be super impressed with me. People would clap.

Little did I know that Blizzard was planning on nerfing Twilight Devastation the very next day.

This isn’t the first time that I’ve gotten a corruption only for it to be nerfed right away. I also got caught in the last major round of nerfs that focused on Echoing Void. Earlier that week I’d gotten Qwor N’lyeth and that weapon always has Echoing Void. I’ve never been lucky enough to get my tank weapon that early in a raid tier so getting to enjoy the effect for one short weekend was a pretty big blow. The only explanation is that I must be cursed (beyond the whole corruption thing).

Hyperbole aside, this is actually a pretty elegant change to Twilight Devastation. They’re preserving the damage for most of the situations that people find themselves in, and the damage falloff isn’t that outrageous. You’ll still be doing giant numbers with it, especially if you have a tank’s health pool, but you won’t be beating dedicated damage dealers as often. Having it disappear after hitting 10 targets could also prevent some accidental overpulls. Those giant purple spotlights of destruction have a mind of their own, and I’ve seen more than one come close to pulling something that you’ve skipped.

I do wish that we saw fewer nerfs overall, this is the last tier of the expansion after all. It’s not the worst thing in the world if we get a little overpowered. But I understand where they’re coming from, especially for people doing Arenas and Rated Battlegrounds. If they added a bigger blanket damage nerf to corruption effects in PVP it would help rein in the worst offenders and preserve balance, while still letting everyone else have their fun. In the meantime, I’m going to go throw some stuff into a volcano and see if that stops the nerfs.