The Queue: Which way next? 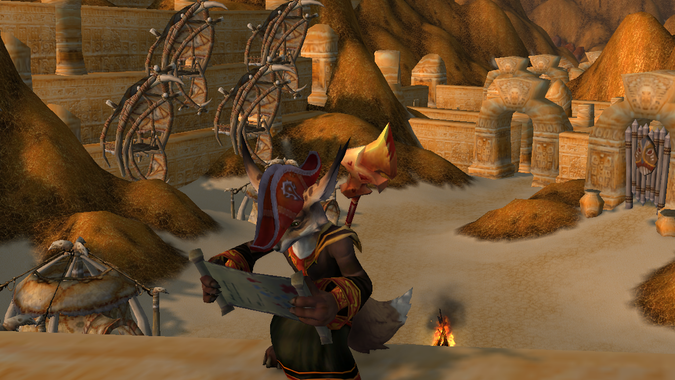 I level characters so infrequently now that some of these old dungeons can be mazes. Luckily I have my trusty map with me. Wait, was it the left path to get to the last boss or the zombies… wasn’t there supposed to be a giant hydra around here somewhere?

Ah well, I’m sure I’ll find it eventually — after all it’s a giant hydra how stealthy can it be? Until I track the beast down, let’s Queue!

J. JALCHEUS JAMESON IS JUST A CASTAWAY, AN ISLAND LOST AT SEA

Oh yeah! I’ve been leveling my Vulpera Mage, Firefox. He was probably going to stay at level 20 for at least a few more months, but this xp boost is amazing! Just running dungeons I’m getting so many levels, he’s almost 60 already, and by this time next week there’s a good chance that I’ll have unlocked the Heritage Armor.

I’ve been amazed at how quick the dungeon queues are, and how many people I’ve seen out and about in quest hubs. The introduction questlines to new expansions must be packed!

ERMELYN PITTS RESCUE ME BEFORE I FALL INTO DESPAIR

QftQ: So, with the XP bonus month currently running, I’ve been planning how I’ll be leveling my alts and I realize there is one zone, no matter what faction I am, that I refuse to run at all. That’s Stonetalon Mountains. Is there any zone you refuse to run as well.

Well for the last few alts that I’ve leveled I was checking off zones for my Loremaster achievement. They had pretty strict routes through content all the way up to Wrath of the Lich King. After that I just kind of went with whatever I was feeling at the time — except for Vash’jir. I just can’t do it again. It’s fine as far as a zone goes, but it’s too long. The gimmick of being entirely underwater just slows me down so much that I’d much rather do Mount Hyjal again for the 16th time.

Which is a shame, because Blizzard really swung for the fences with it. They tried a bunch of interesting new things, and they just haven’t held up that well in hindsight. At least it gave us Warcraft’s best swear — “Thrall’s Balls”

RED IS SENDING AN SOS TO THE WORLD

I felt compelled to do the Trial of Style in order to get the armor sets, even though they’re ugly and I never planned on using them. But the fact that there was a reward made me want to do it.

This time around, there are no new rewards, and I don’t really feel like participating.

Q4TQ: is there any content, in WoW or in other Blizzard games, that you participate in even though there are no rewards (or the rewards aren’t at all useful / important to you), just because the content itself is fun enough to partake in?

I was going to say Battlegrounds in Warcraft until I realized that I really only do them when I need a few more Conquest points for the week. I don’t care about any of the gear rewards from the random Battleground, and none of the rewards for reaching higher tiers of Honor ranks really appeal to me all that much — barring the amazing Guardian Druid Artifact appearance where you look like Ursoc from Emerald Nightmare.

I think the content that I did with absolutely no thought to the rewards the most was the Heroes of the Storm brawls that were the silly fun from their Summer events. Stitches Pull Party and Dodge-Brawl were tons of fun. One of my fondest wishes for Heroes, other than the game getting oodles of more content, is that they find a way to bring back the wacky ruleset Brawls that we don’t get to see anymore.

FALRINN HOPES THAT SOMEONE OUT THERE

QftQ: In a world of variable ilevel gear, I think explicit catchup gear tokens aren’t actually necessary. Instead what if, with each new season, quest reward equipment scaled more aggressively as you leveled through content. The end result being a max level quest reward would be the same number of ilevels behind a piece of max level dungeon loot in season 4 as it was in season 1.

That’s a great idea for people who are leveling new characters. They’d hit max and be ready to hold their own with whatever is current. It would be really nice right now in Battle with the difficulties some players have in getting new weapons.

That being said, getting rid of all catchup gear mechanics isn’t the answer either. Because then the Warrior who you played for a few minutes back during the Uldir tier and abandoned until just now would be stuck in their item level 340 gear.

Q4tQ speculation – so the hunt for Jenafur continues, the Secret Discord is going slightly balmy. Any thoughts on where and why she might be hiding and what she’s lying about.

“This cat is known for her lies, ignore her sweet meows.”

As a cat owner myself, I know that the Jenafur flavor text is 100% about how a cat will meow at you to feed them, even if you just fed them. If there’s even a kibble missing they’re starving and you’re a cruel master for not feeding them more.

As for how to get Jenafur in-game? Saying the Secret-Finding Discord is going a bit balmy feels like an understatement. They’ve been working on this since 8.2.5 and still, there’s very little progress. So far they know that it’s got something to do with food in Karazhan, and might involve a Crazy Cat Lady in Elwynn Forest. Beyond that, it might also involve music somehow, since the organ player Sebastian has a different interaction with players after they’ve activated the first clue — and Blizzard gave this clue “Four Kibbles bounce in time, Four Kibbles count the time” which could refer to 4:4 time in music.

My own tinfoil hat theory is that it has something to do with the Severed Oculus food item that you get sometimes from enemies in the major N’zoth assault. We know that Jenafur has a couple of attacks that you wouldn’t expect to see on a regular cat. Plus there was this strange hotfix all the way back in January. Looping that in with some of the grossest Old God food certainly sounds reasonable to me. Maybe Jenafur can have little a eyeball, as a treat.

Have a good week everyone! Wash your hands, stay home if you’re able, and leave lots of questions for Anna tomorrow!