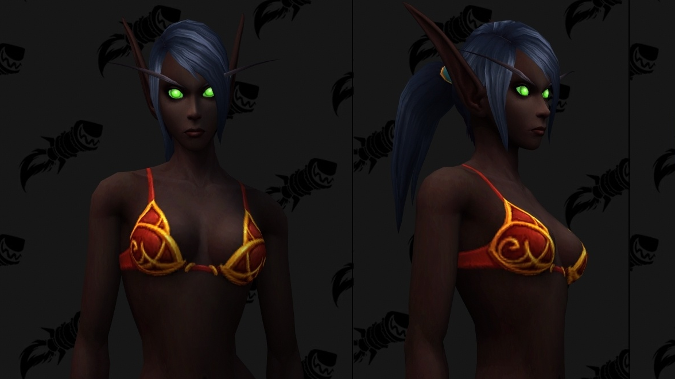 I have spent sleepless nights trying to resolve contradictory threads in WoW‘s story. I was the guy who pointed out the Anima Golems and other Mogu Anima constructs and how they bear a resemblance to how the Well of Eternity was the life blood of Azeroth itself, which seems to be related to the Anima we’re going to see in Shadowlands. What I’m getting at is that I am probably unhealthily obsessed with making almost everything fit into the lore — I’m obsessive about it.

So when I tell you that it absolutely does not matter if there has ever been a singular mention of Blood Elves having dark skin similar to the skin tone of real, living humans, I say this with absolute confidence. Not only does the lore as established only say that the ancestors of Blood Elves lost their Night Elf skin tones when they left Kalimdor, it never once says what skin tones they gained as they changed. Furthermore, even if it did, here’s the thing about lore in World of Warcraft — it’s aggregate.

Aggregate means a whole collected from several parts, often contradictory ones. In the case of Warcraft, what it comes down to is this — High Elves existed first, and we saw them in Warcraft 2. The entire origin of High Elves — that they were the followers of Dath’Remar Sunstrider, a Highborne who tried to convince the Kaldorei to embrace the arcane and who was exiled for it — wasn’t introduced until much later. The Kaldorei didn’t exist until Warcraft 3. The Highborne, the War of Ancients — these were invented later to explain the High Elves and how they ended up on the Eastern Kingdoms. The lore of Warcraft has been built up piecemeal over decades, with new lore introduced to explain and expand upon the old.

So even if there were established, canonical lore that says that there are no dark-skinned Blood Elves — which I do not believe there is — it doesn’t matter. World of Warcraft has always been a game where lore exists to serve gameplay, and if Blizzard wants to make it so that players can play dark-skinned Blood Elves, the lore could easily change to accommodate them if it had to, which to my knowledge it does not. 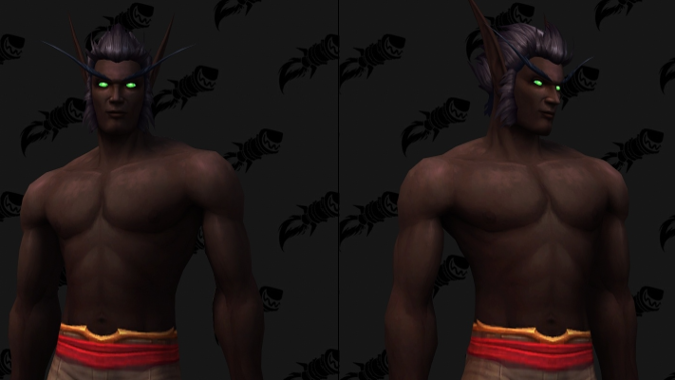 Why has this change been made? Because some players want it. That’s it. That’s the whole reason. Players have said from the beginning they want more character customization. This is Blizzard giving it to them. That’s it. This is a gameplay decision, and it isn’t one that requires a lore explanation. Choose to believe whatever you have to — believe there have always been darker skinned Blood Elves (and High Elves), believe it’s a recent mutation, believe it’s a sign of Blood Elves overcoming their magic addiction if that’s an enjoyable story for you. There is no reason that Blizzard should bother to do anything to justify this, because the reason WoW hasn’t had this up to now isn’t lore based, it’s simply that the game didn’t have enough character customization options. They’re not going to go and put an entire Wildhammer Dwarf starting area to justify why your playable Dwarf has Wildhammer tattoos. You have them — tell whatever story you like. The game is going to facilitate you, not mandate to you.

The fact is, when Warcraft was created, it was a thinly veiled Warhammer pastiche. I mean, they literally designed it to be a licensed Warhammer game, and then didn’t get to do that, so they made it a separate thing. It’s had to make up its own lore as it went, and the people working on it didn’t stop to think about why all their Elves were super pasty. But now there’s a chance for the game to include them, so I say, why not?

I’ve seen a lot of people getting very upset that there are dark-skinned Blood Elves now, which just baffles me. Blizzard is giving us more options. That’s it. They’re not going to stop and justify in lore why they’re doing this. They’re just going to do it and we’re going to have more options to make our characters stand out and really feel more like they’re our characters, which is to my mind all to the good. It doesn’t contradict any established lore, but even if it did, they should absolutely do it anyway. If it makes players enjoy their gameplay more to make their Elf, or Human, or whatever look more like they do? It’s a good decision and it’s one I support.

Blizzard Watch is made possible by people like you.
Please consider supporting our Patreon!
Filed Under: Blood Elves, Character Customization, Shadowlands
Advertisement