The Queue: Squash those bugs 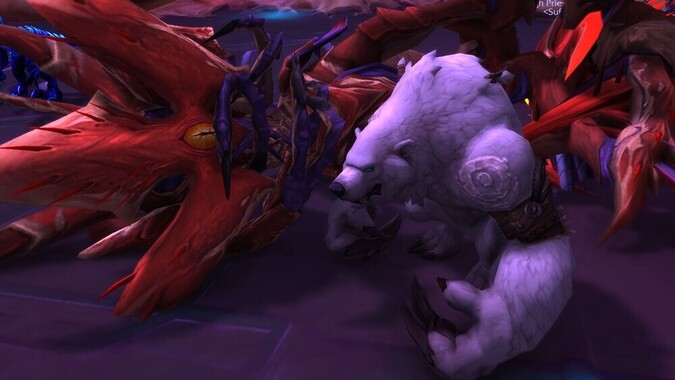 Another boss down! Hivemind has fallen and we’re moving further into Mythic Ny’alotha. I’m a little sad to see it go, partly because I love the massive amounts of targets in the Hivemind encounter — having a giant Twilight Devastation rip through a huge pile of bugs will always be super satisfying — and partly because my team is getting into the tougher bosses now. I’ve come to really appreciate how much I dislike the soccer mechanics on Dark Inquisitor Xanesh. They were already really unforgiving on Heroic, but when you jump up to Mythic they are a binary pass/fail. Either your soccer players get their goal or the raid wipes. No second chances, no get out of jail free cards — just splat. Mistakes happen! We’re only human, but man is it rough when you’re having a great pull, and then you blink and everyone is dead.

It also made me appreciate just how lucky I am to be sharing tanking duties with a guy I enjoy playing with. We’d gotten halfway through our night and realized that we weren’t on the same page for the tank swaps. It’s probably because we’d spent the first part of raid comparing the various qualities of rum and whiskey. I’ve had good co-tanks and not so good co-tanks and man is it nice to know that I’ve got a partner who isn’t taking everything too seriously.  It’s a little thing, that can help make the raid wipes just fly by.

But enough about Xanesh. It’s time for — the Queue.

Q4tQ: Why does RNG feel better in D&D then it does in WoW, even though the systems are extremely similar? It’s so much easier to just say ‘eh, that’s how it rolls’ when there is actual dice that you can see or what?

I think it has to do with the source of the RNG. If you roll poorly and your fighter misses an attack, you’re the one who rolled the dice or typed in the command for the dice bot, and you can put the blame on that thing in real-time. So much of the RNG in video games happens behind the scenes.

When you kill a boss, you don’t see the game deciding what it’s going to give you. There’s no spinning wheel above Blackhand that has a spot that says mount. You can’t console yourself that you almost landed on the mount space. Or if you were really far off you can’t tell yourself that “I guess I didn’t really want it that bad today” or something to that effect.

The other big factor is the Dungeon Master, or Keeper of Arcane Lore, or whatever you have running your game for you. They can be in your corner for a lot of things too. Sure you may have rolled poorly on your perception check, but ultimately it’s up to them how much information they want you to know. Tabletop gaming is a collaborative experience in a way that MMO’s can only dream of. Happy players in your campaign make for better roleplaying! If everyone’s bummed because your buddies Gnome just got obliterated by a trap they rolled poorly on, are they going to be able to appreciate the big villainous reveal just around the corner?

Q4TQ: Why hasn’t Blizzard nerfed LFR N’zoth to the ground yet? It’s still absolute garbage to do.

N’zoth just wound up being the perfect storm of mechanics that Looking for Raid is terrible at. Extra buttons, extra phases, and lots of coordination required. Maybe if N’zoth chose half of the raid for each of the second phases Psycus kills, rather than the group having to self split it would make things a little easier. That’s a huge mechanic that is hinged on players knowing what they’re doing and self-sorting.

I think that they’re in a position where there’s not a lot left that they could do without absolutely trivializing the fight. Since he’s the last fight of the expansion being difficult is ok-ish. It mostly just reminds me of Durumu the legally distinct™ Beholder from Throne of Thunder. Even at the end of the expansion about a third of the raid was dying to each shadow maze he did.

considering the fact that many heroes (tracer) are exact copies, and others (Alexstrasza) are dramatically different so they fit the game, is there any heroes you think would bring alot to the game

I know that we’re unlikely to see another Multi-class hero like Varian. But having a Druid who could choose between Cat, Bear, and Balance would be awesome. I know that they’d probably make the boring choice and put in Broll Bearmantle. They’ve already added Valeera, Rehgar, and Varian has a Lo’gosh skin — so he’d fill out the last of Rehgar’s gladiators — but I really want Hamuul Runetotem added. He’s a great choice! There are already three Night Elves, so why would we need a fourth?

If they didn’t want to do him as a multi-class hero, he could still be added as a Feral Druid. He checks a bunch of boxes there. There aren’t that many melee assassins, and we haven’t gotten a new stealth hero since Valeera was added. I hate to play against them, but I love having them on my team. The stealth characters always make for great Abathur symbiote targets and clone targets too. Having a lot of their power tied into the fact that they can be sneaky is a big help. Some of my favorite Abathur moments is cloning a Valeera or Nova and pouncing on an unsuspecting healer.

CAPTAIN CAKEWALK THE HOOT-HOOT SWING A LITTLE MORE, ON THE DEVIL’S DANCE FLOOR

Q4tQ: What class are you looking forward to playing most in Shadowlands? There are so many changes being implemented in the expansion that even I’m a little unsure of what I’ll main. Could be really interesting to see what might happen.

Guardian Druid! They’re giving us back Berserk for a little extra damage. That was my biggest complaint about Guardian in Battle for Azeroth, that we just didn’t have the on-demand damage cooldown like we did back in Legion.

I’ve already main swapped three times though, so I’m really not that interested in doing it again. I’ve been Holy Paladin, Enhancement Shaman, and now Guardian Druid. It’s bad enough having reputations and cooking recipes spread out over three characters. I have no interest in adding a fourth.

Gun to my head if I was going to swap to any other class. It’d probably be Demon Hunter. I’ve kept her pretty much in the same fighting shape as my Bear and I love the zippyness that is everything about the Demon Hunter class. She’s also one of the few other characters that I play that actually has up-to-date professions.

I used to try and level up all of the different things with each new expansion, but that got a lot harder when I started moving characters off of my first server. Without having that support network of alts to keep materials funneled around and crafters stocked — I got a lot less interested. Especially with how much raw material you need to level professions now! I’d much rather just make a gatherer character and sell the raw mats for an easy profit.

LEFTY SWING A LITTLE MORE, ON THE DEVIL’S DANCE FLOOR

Since every Cory Queue has a music trend:

What is your favorite BfA zone music?

I love the music in Tiragarde. I’m a big sucker for sea shanties and the like, and Tiragarde has that same kind of feeling. There’s something in the tracks that almost sounds like a Hurdy-Gurdy, and it generally just reminds me of the high seas. Plus the Proudmoore music has a nice big bombastic sweeping sound. This may surprise you though, I generally don’t play with game sounds on. When you play as much Guardian Druid as I do, the growls and claw swipes get old quickly.

RETPALLYJIL SWING A LITTLE MORE, ON THE DEVIL’S DANCE FLOOR

Q4tQ: I feel that Blizzard really dropped the ball on getting WoW-themed skins into Overwatch when they released the Blizzard World map.

If you were going to give OW characters tier sets or whatever, who would get which?

More skins for Overwatch! Honestly, I could play the add x skins into y game all day. Of course, as I’m writing this I know that I had the most perfect example to lead with, but sadly it is lost to the fog of memory. But I remember enough to know that it existed in the first place. Aren’t brains weird?

Giving them tier sets gets a little weird because there are only 12 classes in Warcraft but 32 unique heroes in Overwatch. There’s bound to be some overlap. That’s why I think they made the right call to go with bigger lore figures. That said, it’s absolutely criminal that Destroyer D.Va from Heroes of the Storm hasn’t gotten moved into Overwatch. The same goes for Junkrat’s Goblin Sapper skin. They’re fantastic skins, what are you afraid of Blizzard?

Some of the other great concepts — not just from Warcraft:

If any of you can figure out what the perfect skin I was thinking of last night was you get 10 internet points!

On Saturday I asked y’all for some extra Queue questions and boy did you deliver! I can’t fit all 19(!) of the questions into one Queue without it exploding, but thank you so much. I’ve saved a few to drop in over the next few Queues, so if you don’t see yours today — maybe next week! Make sure to leave just as many questions for Anna tomorrow!

Have a great week!