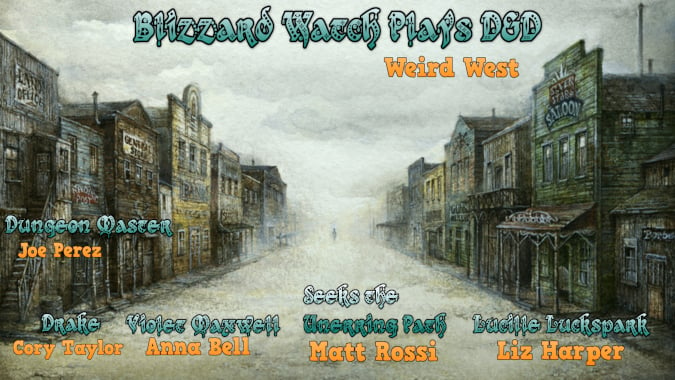 This week our tabletop gaming crew dove back into D&D, but instead of more clone adventures in the Riatan our adventurers found themselves in the town of Last Hope in a Weird West one shot adventure.

These players gathered to take on the evils of high society:

The game was a lot of fun, and had quite a few twists and turns and you should give it a listen before you read any further, because beyond this point there will be spoilers!

Our story started with a brief introduction to Last Hope, the last piece of civilization before folks head out west to the coast across the great desert. Starting life as a boom-town near a deep silver mine in the mountain, the town quickly became known for the strange occurrences that always seemed to happen. Folks who settle there quickly accept the things that go bump in the night as just part of everyday life here.

Each member was approached by a young letter carrier with an invitation to the quinquennial celebration of the founding of Last Hope by the town’s premiere noble Lord Birkenstaff. Truly an invitation that could not be ignored, each of the group made their preparations for the evening’s festivities — Drake found a perfectly fitted tux, Seeks the Unerring Path had his metal plating polished to a shine, and all headed over to the manor. When they arrived, they were greeted warmly by Lord Birkenstaff and mingled with some of the town’s finest nobility, the local law enforcement, and even some of the local merchants.

Drinks were had and introductions made, and after a nice meal and some after dinner conversation the party was ushered to bed in guest rooms supplied by the lord of the manner. It was here that things started to take a turn, as everyone was awoken with an incredibly large boom. Our party decided to investigate and found that one of the servants had accidentally broken a vase and caused a bookshelf to crash against one of the library walls. The party also got to see Lord Birkenstaff lose his temper on the poor maid until he managed to calm himself. After the lord retired and the party discussed their next moves, another loud crash sounded from just above them!

The party ran up the grand staircase to investigate and found one of the guest room doors ajar. [Ed’s note: I like to imagine everyone running around like the movie Clue.] Lucille and Violet were brave and stepped in seeing one of the nobles dead in a pool of their own blood on the bedroom floor. As they crept closer, Lucille stepped on a pressure plate that triggered a magical trap! The door slammed shut and locked and the fireplace began to roast our friends alive. With much effort from the entire party they were finally freed. A blood-curdling scream lead the group to another room where they found an Owl Bear Skin Rug Mimic! It tried to eat Drake but didn’t find him very appetizing.

After a few twists and turns, the true horror of the situation was revealed to our group where they may or may not have accidentally doomed the town and maybe the rest of the world.

Really, that’s just the rough highlights and you should give the adventure a listen!

This game was sponsored by Patreon supporter Sixthousand. If you enjoyed this game and want more D&D and tabletop content on Blizzard Watch, please support us. If we reach our $6,000 per month goal, we’ll run more games every month as well as a weekly column to help tabletop newbies find their way around.

Thanks for listening, and tune in on May 16 for our next game, where we’ll return to the just-as-wild world of Riatan.