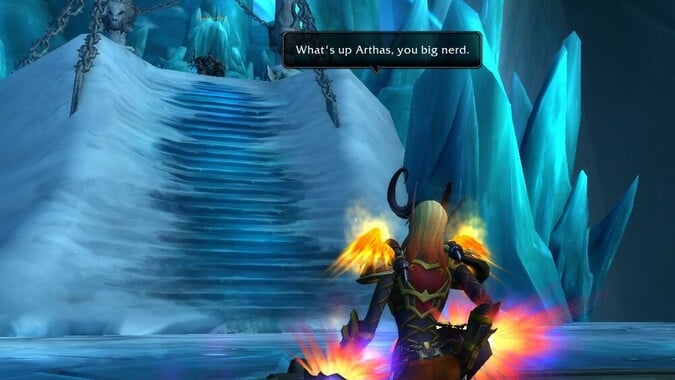 Once again Arthas didn’t drop his mount. I’ve lost count of how many times I’ve stood there at the base of his giant overcompensating throne waiting for him to finish monologing so I could beat him up. It’s an old joke by now, but are we 100% sure that the mount is really called Invincible? Maybe it’s just been Invisible this whole time, and that’s why I haven’t found it! I guess there’s always next time.

While I wait for Tirion to break out of his ice cube I have enough time for — The Queue.

IS YANA WHO ORIGINAL? (YEAH)

What would be the best class/ spec for farming mounts in old raids?

That depends on what you’re farming for. If you’re just going for clear speed to farm gold or a fancy mount, I’d recommend Feral Druid. Feral Druids have the two most important things for clearing old content solo — speed, and an on-demand AOE ability. They have two sprints, with more coming in Shadowlands depending on your Covenant and Thrash and Swipe will leave anything you pull in tiny puddles of goo.

If you’re looking for the different types of armor, Arcane Mages have their blinks, and Arcane Explosion to take care of the large amounts of trash you’ll probably need to kill. For Mail wearing characters, Shamans have Ghost wolf for getting around quickly, and a variety of AOE options depending on whether you’re playing Elemental or Feral. For Plate, go with Warrior. They have Charge and Heroic Leap to help traverse the dungeon, while also being able to equip pretty much every type of weapon in the game.

If you want to make things even easier, try and find pieces of gear with the Speed tertiary stat on them. Making a full set would be tough, but you might be able to shave a few minutes off your trips in the long run with a few extra pieces here and there.

IS JALAMENOS THE ONLY ONE? (YEAH)

Q4tQ: If Demon Hunters were available for all races, which combination would be your first choice?

For the Horde — Orcs. How great would those big beefy bodies look dashing around and flip jumping? Spoilers: So great. Plus they already have plenty of reasons to hate Demons. That whole Blood of Mannoroth thing wasn’t that long ago.

For the Alliance — Gnomes. Gnomes have the same absurdity going for them that the Orcs do. Imagine them as Demon Hunters, it’d be like Yoda fighting Palpatine or Count Dooku from the Star Wars prequels. On the more serious side they already have Warlocks so they’re used to dealing with demonic forces. Demon Hunters are just the other side of the demonic power supply. Or maybe Void Elves, think how cool they’d look with the Void hair and Fel tattoos.

IS KALCHEUS THE FLUFFY EVERYTHING YOU NEED? (YEAH)

Has there been any evidence on the Alpha of looser transmogrification rules?

There are bits that the fine folks over at Wowhead datamined that point to players being able to transmog their shoulders separately. Which would be huge if true. I’d love to choose just the devil or angel shoulder from the Paladin Cataclysmic Gladiators set. Beyond that I haven’t seen any indications of better rules. The dream of being able to transmog any one-handed weapon to any other one-handed weapon — looking at you daggers and wands — remains a dream.

RED THROW YOUR HANDS UP IN THE AIR

Q4TQ: would you be okay if, in Shadowlands, the WQs that require you to kill a single named mob also required you to kill a few smaller mobs in the area? Or would such a change make you rage?

But seriously, setting aside that I do most of my world questing as a bear. Where pulling lots of things takes about the same amount of time to kill as just one — I’m still not in love with this idea. I like knowing that I can probably hang onto my emissary for the full three days allowed in the hope of getting four easier quests, rather than doing quests that are annoying or time-consuming.

That’s also part of the reward for getting flight, that you can just swoop in and make a surgical strike to kill what you need and fly away again. Like an eagle catching a fish in a river. If Blizzard really wanted to mess with them to make them harder they could put the kill target behind more enemies, or with more patrols in the area. That way prior to flying you’d have to plan your route into the area more carefully.

But I think that misses the mark on world questing. It’s not supposed to be ultra-challenging or take an hour to do your emissary quests. Just kinda go do your thing and have some fun traveling the Shadowlands. World quests help to ensure the world feels lived in by getting players out and about for more than just dungeons and raids.

MISTAH JAY WAVE ‘EM AROUND LIKE YOU JUST DON’T CARE

Q4tQ: Would you like the idea of a player race that had a per-realm (or realm group) limited population? like there can only be 350 player characters of that race, or something

Oh man that would be a really great idea in a vacuum. Gives a little bit of prestige to the select few, and helps make the times you do run into one of the limited things more exciting. Plus it makes the story feel like a more important part of the game for those few people. They’re one of the last three hundred or something along those lines.

That all being said — no thank you.

This reminds me very much of the housing crisis in Final Fantasy 14. To recap briefly, until overwhelming negative feedback there were roughly three thousand housing plots available per server. Early birds could snatch up the plots and hoard them for sale later. If you were too late, you were too late. I don’t know if it’s improved since then, I hope it has, but it shows how limiting anything in an MMO to a first-come-first-served setup isn’t great.

Imagine if there was a fancy new Super Orc who was only available to the first people who logged on and made new characters on patch day. If you couldn’t play right away, you’d be out of luck. If you had a slow internet connection that day, you might be out of luck. If the burrito you ate last night for dinner had some bad beef and you spent the morning on the toilet — out of luck. Things could get complicated after that too. What happens if you wanted to server change, but that new server was already at the cap. Would you just lose out on being a Super Orc? Would you have to wait for a spot to open up, and hope that you were at the front of the line?

I think that it’s better if in cases like this MMO’s give everyone the same chance to take advantage of the cool feature, even if the story is that you’re one of the final members of that race/faction/club.

QftQ: who do you think would be the best golfer in WoW?

Well, Dwarves are routinely considered to be broadly Scottish, so they’d have the natural affinity for their own sport you’d assume. We’ve seen that Goblins will make their own golf courses. Which probably use exploding golf balls and rocket-powered clubs. Trolls have the arms to really get a good swing on their clubs, they’d probably be able to drive the ball super-duper far. But there’s only one answer to this — Medivh.

Because of all the things we know about Medivh, one stands at the forefront of my brain when thinking of him.

That’s it for me! I hope y’all have a great rest of your day off. Don’t have too much fun that you forget to leave Anna some great questions!