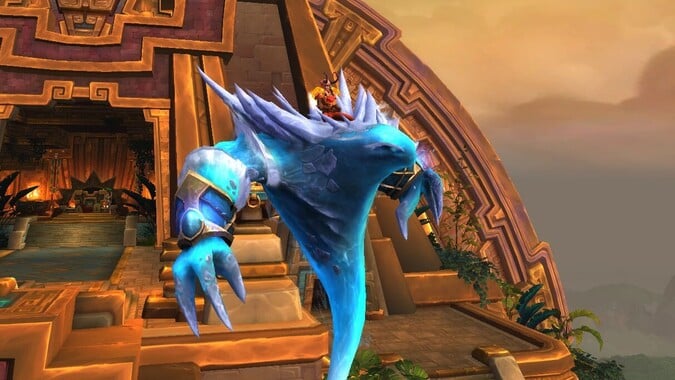 They say the devil is in the details — little things that you may not even realize you’re seeing can really have a huge effect on just how much you remember a game fondly. I know that Herald Za’qul in Eternal Palace stood out to me because the eyeballs in his shoulder armor act like spotlights. As they look around the room, they light it up. One of my favorite things that I’ve seen recently is that the Glacial Tidestorm mount that drops from Mythic Jaina has little fish swimming around in it. Really! There are tiny fishes swimming in it! You can see all the little fishes for yourselves in this clip:

It’s such a great little touch, because when Jaina summons up this giant elemental during the fight, you’re in the middle of the ocean. In my mind, she’s desperately using whatever resources at hand to make it, and some poor little fish got swept up into the water she uses to make the elemental. Now they’re forever part of the elemental as the Heroes of Azeroth ride it around. The mount would be plenty cool — get it, because it’s glacial — without the fish. But it’s a little something where the animators went above and beyond to really knock it out of the park.

Something else that I’ve been really impressed with recently is how the end of Mythic+10 or higher dungeons has a ton of extra N’zoth, Old God creepiness added. There are Ny’alothian texts and symbols on the walls, and giant eyeballs watching everything unfold. I know that Keystone runs aren’t the best place to be looking around like a tourist, but if you can take a moment after the run is over, it’s a really neat touch.

What’s your favorite little thing? Is there a Battle Pet that has a cuter-than-average animation? An environmental detail that really sells the creepy factor of a crumbling ruin? Is there something that you think the majority of players might’ve missed? Let us know below!

Blizzard Watch is made possible by people like you.
Please consider supporting our Patreon!
Filed Under: Fish, Glacial Tidestorm, Mythic Jaina, The Devil Is In The Details
Advertisement