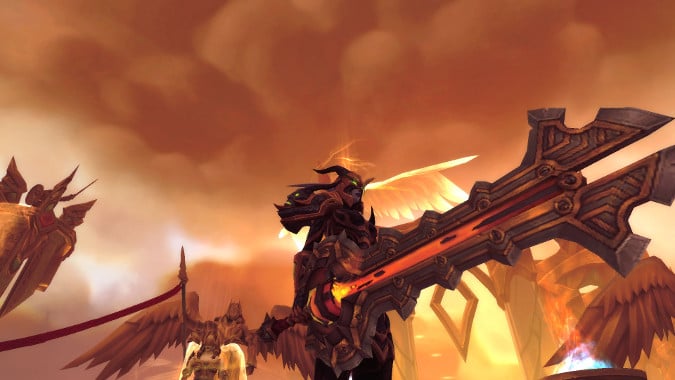 The Balance of Power quest line, beginning with The Power Within, required players to run multiple Mythic+ dungeons and several Legion raids to complete. This long, complicated quest chain — which unlocks several appearances for your Artifact you can still use for transmog — required groups to complete when it was current content. Now, although it can be challenging, you only need yourself to get it done. However, just because it can be soloed doesn’t make it easy. You’ll still have to invest a great deal of time and some significant effort to accomplish it.

However, that doesn’t mean you can’t do it. I completed it when Battle for Azeroth was still young and the Dazar’alor raid wasn’t in game yet. With item levels significantly higher now if you’re in Ny’alotha gear, much of the difficulty of the quest chain is less pressing. The major investment you’ll have to make to complete Balance of Power at level 120 is time.

But let’s talk about that. 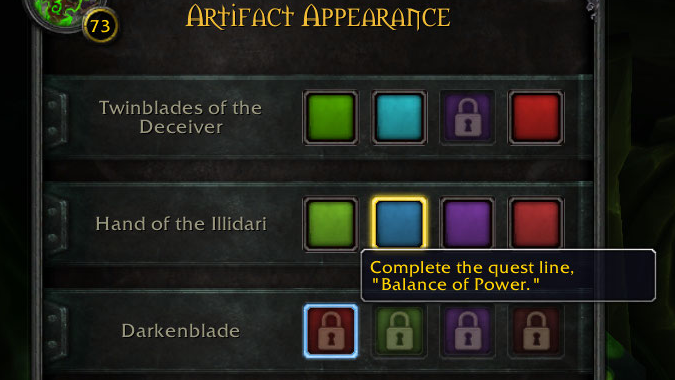 Before you get started, grind rep and complete other quests

My first piece of advice to you is to work out all the ways to make Balance of Power easier for yourself. Make sure you know where the entrances to all the raids and dungeons you’ll need to complete are, and you have easy ways to get there. For example, to enter the Nighthold, you have to find the entrance to the raid. It’s not readily apparent from the surface of Suramar, but if you already unlocked the portal from Shal’Aran that will take you right to the Nighthold meeting stone. You may want to do that, as it will make coming and going from the raid to Shal’Aran much easier. Since you will be turning in several of the quests for Balance of Power at Shal’Aran, having the place unlocked and portals intact makes the whole process much less painful.

You’ll also need to get up to honored with the Court of Farondis. While we’re talking rep grinds, you also want to be Revered with both the Nightfallen and the Valarjar in order to accomplish further progress points in the quest, and you’ll have to basically complete the Good Suramaritan achievement (especially the Moon Guard Stronghold portion, but do all of it as it will make things easier later).

Starting the quest chain at level 120 means a lot of the steps are pretty easy — they just mean that you end up having to travel a lot. Kalecgos will send you to Azsuna, but if you haven’t already finished the Order Hall Campaign up to the part before the Broken Shore he won’t offer you the quest. If you haven’t finished the Defending Azurewing Repose quests, you have to do that first before the quest can continue. Those in-between steps are something to keep in mind if you’re trying to do this questline on a character who didn’t do any Legion content — maybe you burned through and hit 11o before you got that far, maybe you boosted to 110 with Battle for Azeroth, but either way there are several steps on this quest line that require you to have progressed to certain points in the various Legion storylines. If you intend to do the whole Balance of Power storyline, either do it on a character that has already completed the Order Hall Campaign and has fully finished up with the Suramar storyline or get those done ASAP. 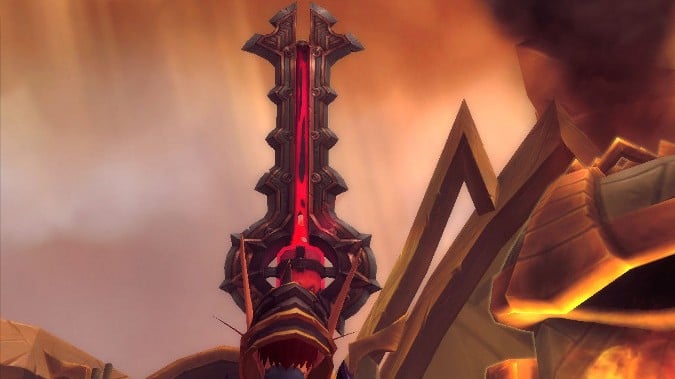 The quest begins with lots of Mythic dungeons

Once Kalecgos offers you the initial quest, you’ll find yourself having to go do the Eye of Azshara dungeon on Mythic difficulty. This isn’t very hard if you’re level 120, but it has to be Mythic. You’ll then be sent back to Azsuna to buy a Veinglorious Draught from the Court of Farondis. This is where you need to be honored with Court of Farondis.

After you get the Draught from the Court of Farondis, you’ll start the group portion of the quest line — but at 120, you don’t need that group anymore. Just remember that all the dungeons must be done on Mythic difficulty, and all the raids have to be done on Normal difficulty or harder.

To start, head to Darkheart Thicket on Mythic, gathering a Corrupted Essence from Oakheart and beating Xavius. You’ll then have to collect 30 Blood of Sargeras which comes from a myriad of sources — you can transmute to it, buy it, run Legion era missions for it, just get 30. After this, there are several quests that are trivial to complete, and then you’ll need to go into the Emerald Nightmare raid.

There are two quests you’ll need to complete in the Emerald Nightmare. Remember, you have to do all the raids for Balance of Power on Normal or higher difficulty, and there’s no reason to run them on Normal, Heroic, and Mythic — once a boss has dropped a Corrupted Essence on any difficulty, said boss won’t drop it again on another difficulty until the raid resets the following week. While you can guarantee the Deathglare Iris and Horn of the Nightmare Lord in your first clear of Emerald Nightmare, you might need to run the raid more than once to get the 30 Corrupted Essences you’ll need to finish this portion of the quest chain. Grit your teeth and kill every boss for as many weeks as it takes.

After you’ve finished with the Emerald Nightmare, you’ll need to finish the Nightfall and Moon Guard Stronghold portions of Good Suramaritan if you haven’t already. After you get that done, the Moon Guard will tell you to talk to Thalyssra, who can give you a scroll you need for the next step of the quest. You’ll need to be Revered with the Nightfallen for that. Hopefully getting Good Suramaritan done will have taken care of that for you but if not, get to work on that reputation — you can’t progress without it.

You’ll then have to run three Mythic dungeons — The Court of Stars, the Arcway, and the Vault of the Wardens. After all that you’ll need to kill a demon you’ll be able to solo at 120, and after you’ve absorbed the power of the demon lord’s bindings you’ll have to go to Stormheim and prove your worth to Eyir. We warned you about before so hopefully you’re already Revered with the Valarjar. Because of course, Eyir will send you to run Mythic Maw of Souls and smack Helya on the nose, and once you’ve done that, you’ll have to go kill animals across the Broken Isles like we’re hanging with Nesingwary again. A brief side-trek to Neltharion’s Lair — as always, on Mythic — and you finally get to go to the Halls of Valor and jump through hoops for Odyn, who of course will only let you do that on Mythic as well.

Thankfully, that’s your last Mythic dungeon — from here on out, you only need to go to one place to finish the quest chain.

Finding Balance in the Nighthold

Just because we’re done with all those Mythic dungeons doesn’t mean things will be easy — there are three quests you’ll need to complete in the Nighthold before you can get your Artifact appearance. Luckily, you no longer have to do them in a specific order — all three of the Nighthold quests appear to be available at once as of patch 8.0.1. The quests are Delusions of Grandeur, Into the Nighthold, and Darkness Calls.

You can now accomplish Delusions of Grandeur and Darkness Calls in one run, collecting the various pieces needed and killing Gul’dan. You will likely need to run the Nighthold raid at least twice to finish Into the Nighthold, as the bosses are not likely to drop the 20 Nightshards you need in a single clear. It can be frustrating to completely clear the raid and end up a shard or two short, but keep at it. It took me three and a half clears to complete the quest — I just wasn’t getting lucky on Nightshard drops. Once you’ve finished all three Nighthold quests, there’s just one last stop to make after you return to Shal’Aran and fling your gathered treasures in Kalecgos’ face while yelling Gimme my Artifact look you jerk I’ve been at this forever — or maybe not, maybe you’re more mature than I am.

Anyway, after you do all that, you have to go up to the Moon Guard Stronghold.

I hope you completed Moon Guard Stronghold in the previous steps, because if you didn’t you have to do it now before you can progress and finish Balance of Power, the final quest in the chain. If you did, then congratulations, you now have an excellent new Artifact appearance.

Most of the difficulty of the Balance of Power storyline at this point is just sticking to it and getting it all done. You can easily solo all of the dungeons and raids at level 120 regardless of your gear. It just can get exhausting to have to go back to the Emerald Nightmare or Nighthold again because not enough pieces of the things you need to finish that one quest dropped this week. Remember, the quests were designed to be completed by raiders clearing it all weekly across the course of the expansion. Just keep going and you’ll get it done.