Surprise: Hearthstone’s Patch 17.6 is live! The patch gives us our first look at the next expansion: Scholomance Academy. But while the expansion will only be released in early August, today’s patch lays down the groundwork for some of the upcoming updates to the game — and, of course, expansion pre-orders.

Among them are a fresh batch of Battlegrounds changes, including brand new hero Tess Greymane, two returning (and completely changed) heroes, two re-balanced heroes, a brand new minion, and more!

If you have the Tavern Pass you can play Tess Greymane right now — but if you don’t, she’ll go live for everyone on July 28. All of the other changes are already live for all players. So sit back, sip on your refreshing beverage of choice, and enjoy! 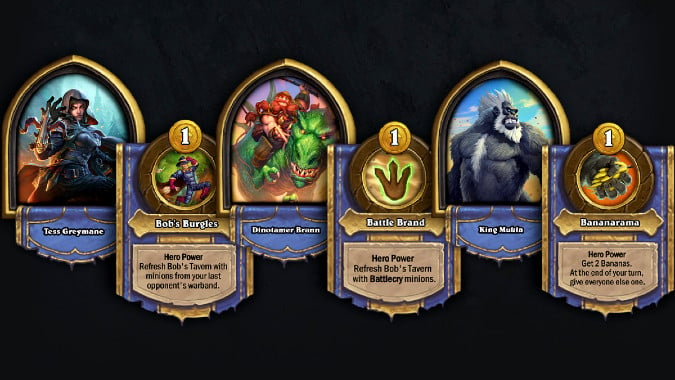 A brand new hero is being introduced, and it’s our favorite rogue princess who wishes she was a werewolf, Tess Greymane! Her hilariously-named hero power reads:

That’s a very interesting hero power. In theory, it means that every minion that’s offered to you after a refresh should be a good minion — since someone paid for it and added it to their warband. On the other hand, it could make it slightly more difficult for Tess to truly specialize into a build of her choice. She definitely sounds like a refreshing hero, though.

Two old friends are coming back in improved forms. The first is King Mukla, whose new hero power goes like this:

The other is Dinotamer Brann, who, much like his card namesake, speciallizes in Battlecries now:

I’ll wait before I pass judgment on this one. His Hero Power doesn’t sound terribly impressive to me, at first glance. But, once you do get a Brann — the minion — later in the game, it has the potential to truly shine. Seems like it requires a bit of setup for you to get the most out of it.

The youngest Starseeker sister, Aranna, also entered Battlegrounds recently… but didn’t make much of a splash, at all. Her hero power was very weak and so it’s being buffed. Now it only requires five refreshes (instead of seven) for her Demon Hunter transformation to kick in:

On the opposite end of the spectrum, the pirate troll Captain Hooktusk debuted as the strongest hero in Battlegrounds and was in need of a nerf. Her hero power remains the same, but you no longer get the option to Discover:

This sounds like a humongous nerf, if you ask me. I fear for the viability of Hooktusk now, but time will tell. 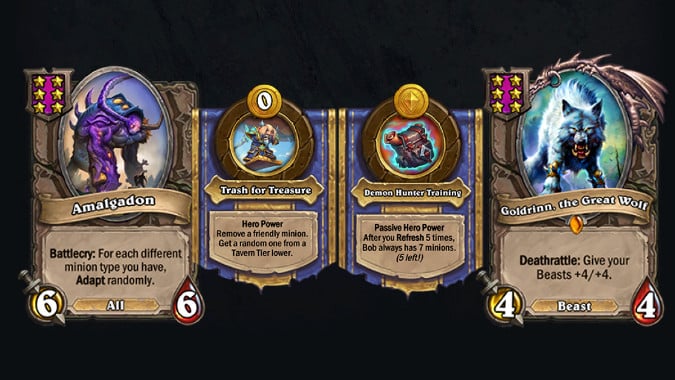 First of all: pirates are no longer guaranteed to appear in every Battlegrounds game, so it will be a true rotation now. This is somewhat minor, but it should be nice to see slightly fewer Macaws and Arcane Cannons, for the sake of variety.

A brand new Tier 6 minion is being introduced. Amalgam is dead; long live Amalgadon! It’s a 6/6 that, like its predecessor, counts as all minion types, so pretty much any buff can affect it. In addition to that, it has a powerful battlecry:

This minion is clearly an attempt by Blizzard to buff Menagerie compositions. Our favorite (and only) Worgen Paladin, Lightfang Enforcer, doesn’t cut it by himself anymore; Menagerie builds could definitely use the help.

Speaking of popular builds, Goldrinn has been a staple in what is arguably the strongest comp currently, Macaw Beasts — a build that focus on using your Macaw to replicate the Deathrattle of Goldrinn several times, especially aided by Baron Rivendare, greatly increasing the power of your other beasts. It was so powerful and prevalent, in fact, that Blizzard saw it fit to nerf Goldrinn, who will now be found on Tier 6 instead of Tier 5. A good change, in my book.

And a little more…

This patch also brought some changes to cards in Constructed, which had been announced a few days ago. You can find them in the official blog.

That’s all for now, folks! Enjoy your burgling, your battle-crying and your bananas!