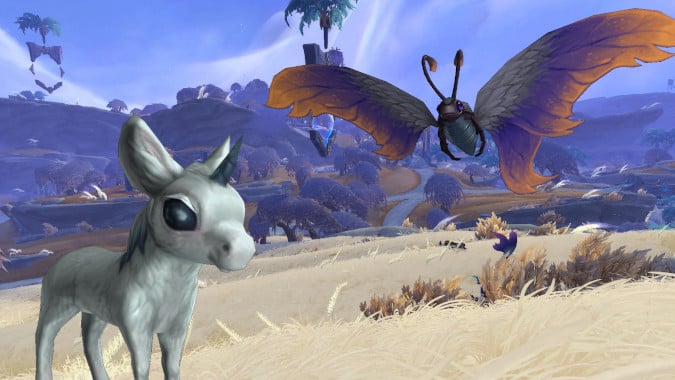 This stage of the Shadowlands beta has seen a focus on pet battles. There are major changes like a nerf to the abilities Black Claw and Flock, reducing the power of this combo. Maybe, without the strength of the combination of these abilities, pet battle teams can be less limited. Gone are the days of the few teams with the required same moves, as we welcome in the new era where the teams can focus on the most important aspect of pet battles — how cute the pets are.

Shadowlands pets are not lacking in the cuteness department. Keep in mind, this is beta and we don’t have all the info (likes moves or source location) for these pets. There is still time to see how useful they will be in combat — but for now, here is just a sampling of some of the cutest battle pets revealed. 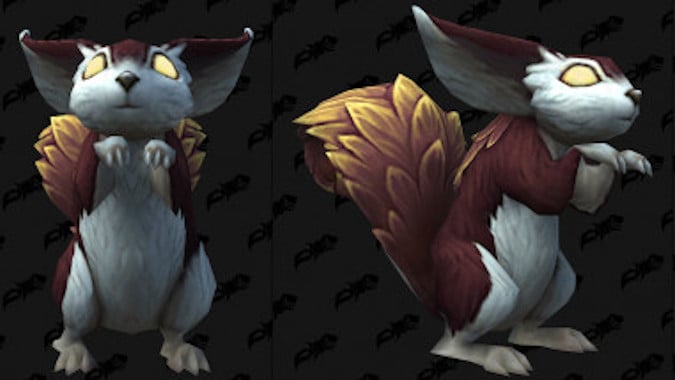 From learning the pet battling skill in Stormwind and being able to start capturing pets, squirrels are one of the first pets many players see and start fighting. Other than the undead variety, there hasn’t been a lot of improvement on them, until now. These adorable creatures lengthen the ears, bushy up the tail, and have a great graphics overhaul, now reaching their full potential. No information yet where they come from, but it can be expected they are running rampant around Ardenweald, and this is the first pet here that shows how much cute Blizzard is throwing into this zone. 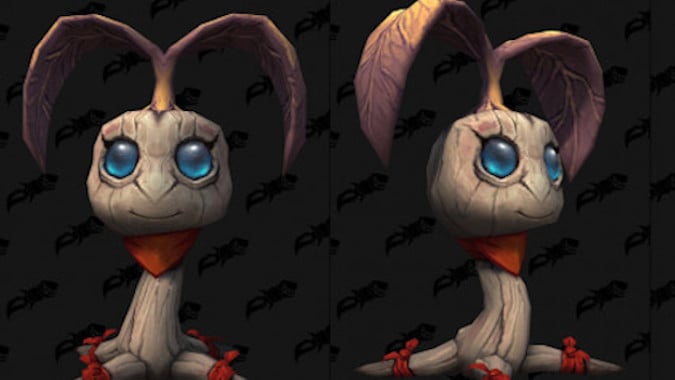 Psychologically, one aspect of cuteness is the ratio of the size of the eyes to the rest of the face. It is ingrained, to make babies, or younger creatures like puppies and kittens, who are more helpless, more likable, so others will want to help them. Tree Pet is about 30% eyes, and 50% leaf hair. The rest is irrelevant, the cuteness has already been established. Again, Ardenweald proving it can grow cute on trees. It is also quite a feat to make an Elemental pet so adorable, without having to resort to borrowing from the forms of beasts. 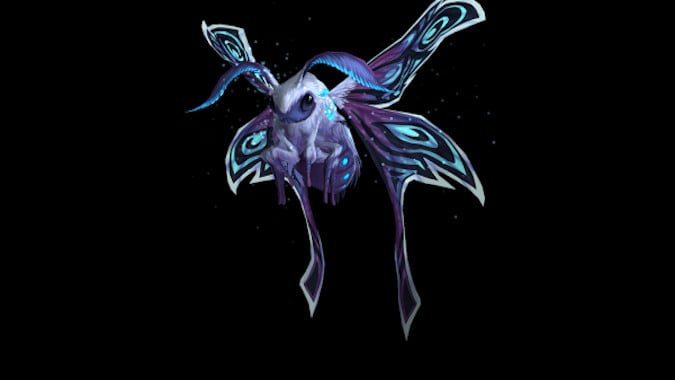 Ardenweald is such a beautiful place that even the bugs are gorgeous. Blizzard has historically done well making moths a nice looking pet, with the dust that surrounds them, giving off a magical glow. These moths come in several colors, capturing the look of the zone for which they are named. Even better, this pet has a matching mount. 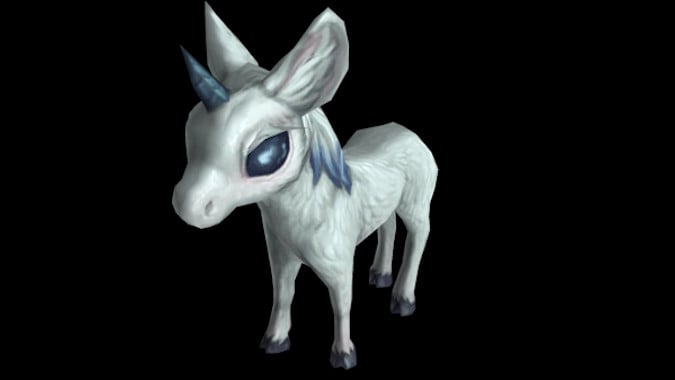 Enough praising Ardenweald — the cutest of the cute actually comes from Bastion. Legion gave us unicorn mounts with Dreamrunners, and Battle for Azeroth made them tamable for hunters, but there were no matching unicorn battle pets. Then along comes the Bastion Baby Horse! Available in Blue, Yellow, and Purple — hopefully Green will be added, to go with the Wild Dreamrunner. 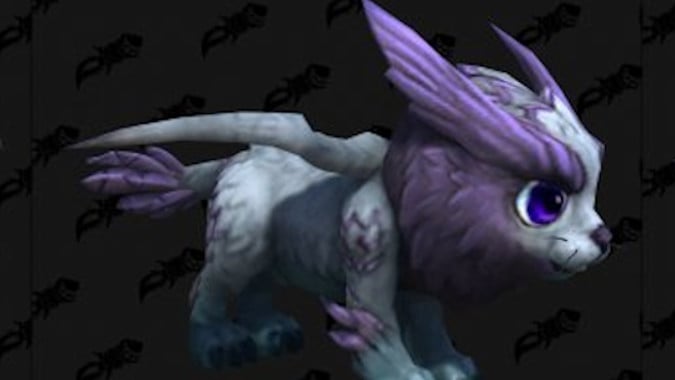 Speaking of adorable Bastion pets that match mounts, the Winged Lion. This comes in three colors, Purple, Blue, and Gold, the same three colors as the Winged Lion mount. This looks like a lion cub that will follow the adult. And assuming the wings work and the pet can fly, this will not vanish when flying becomes available and will follow into the air. Those are always the best pets, because they don’t need to be re-summoned every time the player moves anywhere. Will they have cute sounds, though? An attempt at roaring that sounds more like a meow? An animation where they attempt to chase a small creature nearby? Winged Lion looks like something that could have been a store pet, but it is going out to all those choosing the Kyrian covenant. 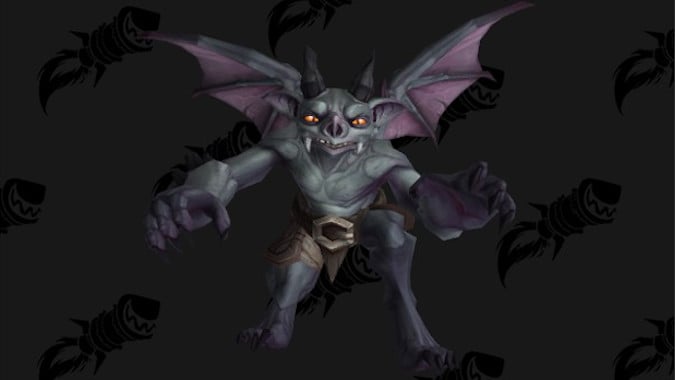 There are several pets that are gargoyles. Gargoyles are servants in the Revendreth realm. They all have a certain sense of cuteness to them. They are smaller, and they have an attitude of begrudging to them. They look like Stitch from Lilo & Stitch. Dal was the one that was named, so he won for the cutest of the lot. Unlike so many pets on this list, he has a source! He comes from a World Quest: A Stolen Stonefiend. Dal also has abilities listed, with Package Drop and Snail Mail, implying that he is a messenger. 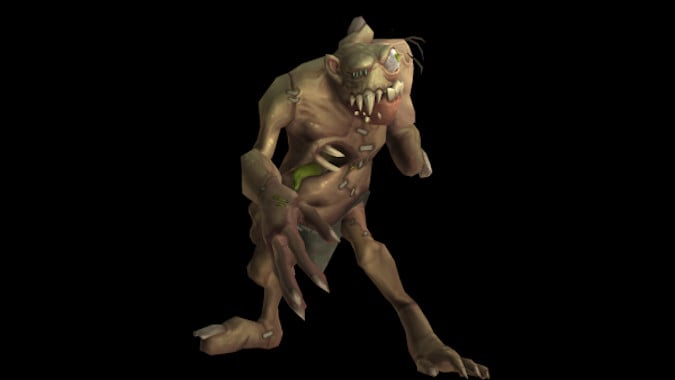 The word “toenail” is kind of cute, right? Look, this is the cutest thing Maldraxxus has to offer — unless you like Jelly Cat (Editor’s note: I love Jelly Cat.). A zone full of undead and sewn-together-corpses, this is a playful version of that concept. It has a small toe as an arm. This is already looking to be a popular pet. Blizzard Watch’s own Cory asked The Queue how much they loved this guy. Of all the pets that have been datamined, this is one people are talking about. Maybe not traditionally cute, but creepy enough that it is garnering attention. Toenail has Abilities listed and appears to come from the Maldraxxus Covenant. All damage dealt is undead, including a new ability added in Shadowlands, Death Bleat. 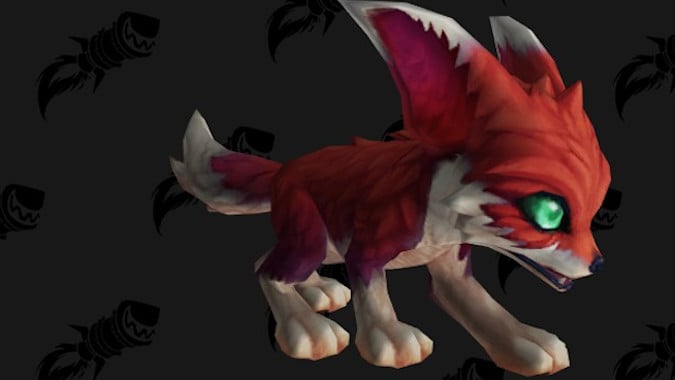 This list ends on the cutest of them all. There are several colors of Vulpin, including red, orange, white, gold, and black. There are matching beasts in both Bastion and Ardenweald that can be tamed by Hunters. The only one that can be used as a mount is the Vulpine Familiar from the Blizzard Store. So far the source of these pets are unknown. Probably a mix of some in the wild to be battled and some from other sources. There is one vulpin battle pet that is named, Renny. This one is a magenta color, and could be a reference to the film The Adventures of Renny the Fox. They could be great pets for Vulpera players to have, to match their character. Or for other players to have, to taunt Vulpera.

There are a lot of battle pets for Shadowlands, most not implemented in beta yet, just datamined. These are some of the cutest seen so far, but cute is subjective, and more are revealed all the time.

Blizzard Watch is made possible by people like you.
Please consider supporting our Patreon!
Filed Under: Battle-pets, Covenants, Cuteness, Shadowlands
Advertisement