Want to level fast in Diablo 3? Here are some ways to rocket to max for the Season 21 procrastinators

So, for whatever reason you want to level in Diablo 3 and you’re not interested in slowing down to see the game. Maybe you’ve already played the story a few times now, maybe you’re trying to get through a Season fast before it ends, maybe you’re just the efficient type. Whatever the case is, you want to get to level 70 and start grinding on Paragon Levels as fast as you can? Well, there’s fast, and then there’s fast, so we’ll talk about various ways you can get to max level as fast as possible.

You should be cautious about using them anyway, as they can leave you with very little understanding of how to play your class. But they do work and it would be remiss if I pretended they didn’t exist. 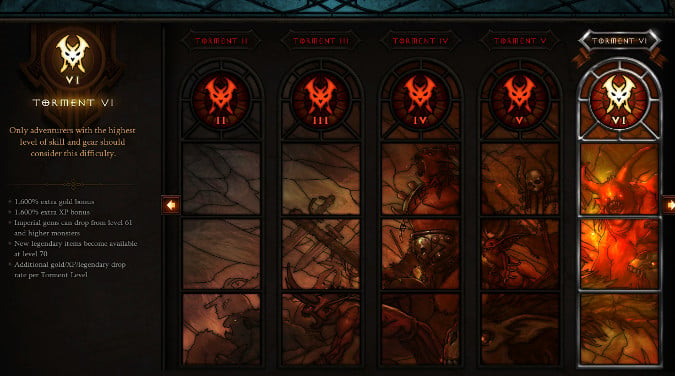 There are two methods that I find to be the absolutely fastest way to level. The first requires you to at least know one other player with a level 70 character who is willing to help you, and sees you use Adventure Mode. What you do is have them invite you to a game and set the game to the highest Torment level they can easily solo, up to Torment 6 which is the highest level a non-70 player can experience. Then they run the content — a Nephalem Rift would be the absolutely most efficient way to find a host of monsters and turn them into mulch.

Since each successive Torment level increases your experience gained — Torment 6 increases it by 1600% — and because your level 70 friend will be destroying wave after wave of monsters, as long as you stay back and let them you should literally drown in experience. You’ll be level 70 in like four Nephalem Rifts or, if you prefer, one full sweep of all available bounties in each Act. And you’ll likely get some gear out of it, too.

The second method isn’t quite as fast, but it’s still very fast. This requires you to have a level 70 character who has obtained a Gem of Ease through Greater Nephalem Rifts. The Gem of Ease, once it reaches level 25 (so you’ll need to be able to run at least a Greater Rift 30 or so) can be socketed into a weapon to not only increase the amount of experience you get but also to lower the level requirement of that weapon to 1. This means that you can send that weapon to any alt you have that can equip it, and they can get it and start using it as soon as they get to New Tristram and the Stash in Act 1.

However, if you don’t want to have your Gem of Ease socketed into a weapon, you can use it in Kanai’s Cube to simply permanently remove the level requirement from a weapon. This does mean you won’t get the Gem of Ease’s XP bonus on that item, but it also means you’ll then be able to get a new Gem of Ease on your level 70 from a Greater Rift and then you could send another weapon to another alt, or just use the Gem yourself to grind out Paragon Levels faster. Either way, whether you use the Cube or just socket the Gem of Ease in a weapon, that level 70 weapon will be an enormous power jump for a level 1 character and will likely let you utterly destroy any and all monsters you run into for quite some time. You can set the Torment level up to 6 and just wreak havoc in Story mode for the first 40 or so levels before that level 70 ancient legendary weapon won’t just turn anything you hit into paste, and with Torment 6’s 1600% XP and the Gem of Ease’s XP bonus depending on how high you leveled it you’ll potentially be level 40 before you leave New Tristram.

These two methods are the absolutely fastest way to get to level 70.  But what if you don’t have a bunch of level 70 friends and haven’t leveled to 70 yourself? How can you speed the process up? 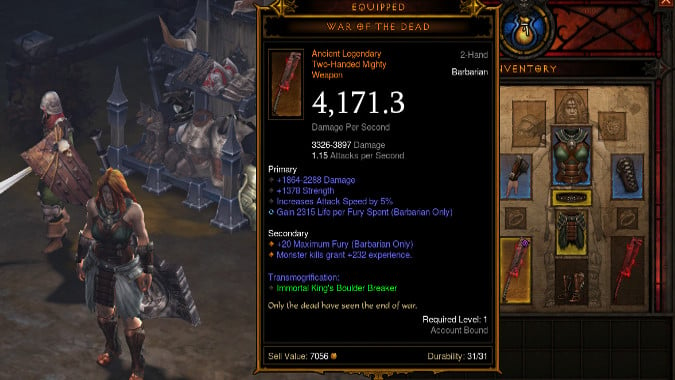 Leveling for the less experienced

Let’s assume you’re just starting out in Diablo 3. You don’t have any of that stuff from the first part of the article. You don’t know anyone who plays, you don’t have any high level alts to feed you gold and better quality items so you can wade through monsters. You can’t even speed level the crafting NPCs like the Blacksmith or get high level gems to socket in your gear. What can you do?

First up, if you have even one friend who is willing to play Diablo 3 with you, do that. Two or more players together can take on harder mobs who are worth more experience. Plus, the game is more fun with friends. My wife and I often play the game together and to be honest she keeps me motivated and working to get leveled up because she always smashes crates before I can and it drives me up a wall. Secondly, if getting levels is your primary concern, then gear for it.

If you look at the screenshot above, you’ll notice that the ridiculously OP 2h that my level 10 Barbarian is sporting has a stat that increases the XP that Monster Kills grant. In this particular case it’s an additional 232 XP per kill. That stat can be found in varying levels on gear for every slot — you can find it on Legendaries, on greens and blues and yellows, on rings and boots and necklaces and weapons and every armor piece. You can even socket a red gem into your helmet and that gem will grant you a percentage based XP bonus — the lowest level red gems socketed into a helmet will give you 10% XP and as you level up, you’ll find or make better and better red gems up until you can make gems that will allow you to have up to a 41% XP bonus. This bonus drops once you hit level 70 — a gem that gives you 10% XP boost at level 69 will only grant 1% at 70. But for leveling up, combining as much gear with bonus Monster Kill XP and a red gem with a socketed helm is a very solid way to get to max level as fast as possible.

If you are pursuing this approach, then Leoric’s Crown is an amazing drop you will get early in the game. If the Crown drops with the legendary effect of boosting any socketed gems by 100%, it will double the XP bonus of whatever gem you have socketed into it. This will mean you might well hold on to that Crown way past the point where a stronger item would utterly overshadow it just for that bonus, as it will double the XP boost on higher level gems as you find or make those. Getting up t0 60% bonus XP when you’re level 30 or so will definitely keep this Crown on your head for a while. 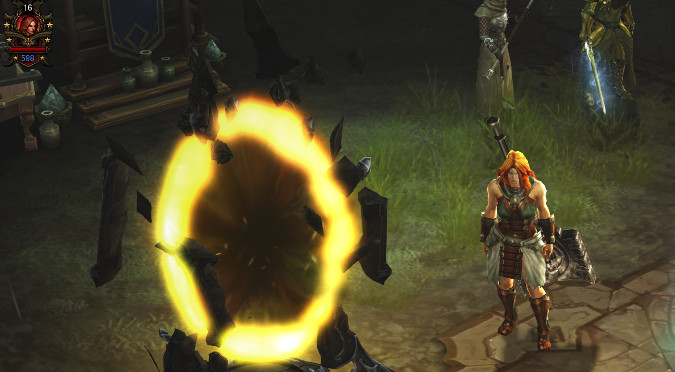 Adventure Mode, Torment Levels and you

If you just want to get as much XP as possible as fast as possible, then after you get Leoric’s Crown from Act I and get a red gem socketed in it, you may want to abandon the Campaign mode for Adventure Mode. As you can see above, my level 16 — yes, she gained six levels in the time it took me to take 2 screenshots of her, that’s how fast that ridiculous weapon lets me level her — can easily go to Adventure Mode and trigger a Nephalem Rift.

Even if you don’t have a higher level character to boost you and can’t use your level 70 to give you gold, gems and better items, you can go to a Nephalem Rift any time you want, and they are the most efficient way to farm monsters, gold, items and XP, especially if you can survive turning the difficulty level up. This works with a group, if you have anyone available to run Rifts with you, you should do it.

Every level you increase the difficulty up to Torment 6 — the highest level you can access before level 70 — will increase your XP gain. But remember, in order to hit certain game difficulties, you need to have progressed a character in the Campaign, so if you’ve never done Diablo 3 before it will ultimately benefit you to complete the main story at least once so you can unlock higher difficulty levels. Don’t just jump to Adventure Mode if you’ve literally never played Diablo 3 before, because you’ll end up slowing yourself down in the long run. Only skip the Campaign once you’ve finished it on one character.

And there you have it — ways you can get to max level in Diablo 3 as fast as possible. I’m sure I’ve forgotten some, but the comments are a great place to drop by and mention all the ways I’ve forgotten so others can gather more tips for the climb up.