The Queue: I bet you think this song is about you 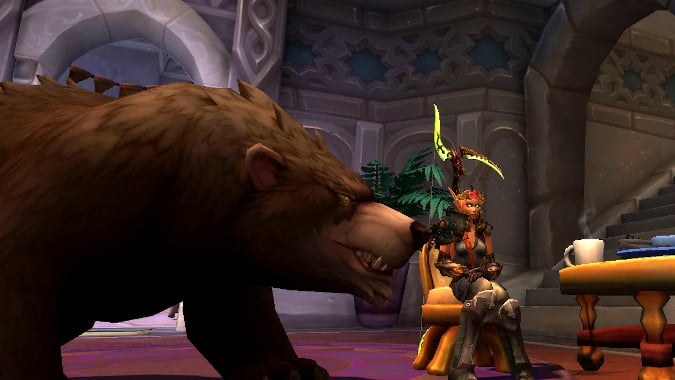 Rutherford and I are really just trying to get some peace and quiet this week. Let’s all grab a mug of something warm while we settle in to answer questions! Hopefully, a bear won’t be sniffing at yours the whole time. Rude.

This is The Queue, where you ask us questions and we have the answers!

QftQ: Do previous expansions normally go on sale once a new one is released? Unfortunately I missed the summer sale and I don’t really want to pay more for BFA than Shadowlands itself.

Usually after the launch of a new expansion — it may even be during the pre-patch period — the previous current expansion is just bundled into the base game. Unfortunately, it doesn’t work like Heroes of the Storm, where you get a discounted price on an overall bundle if you already own one or more of the items in it. So if there’s nothing about the waning days of Battle for Azeroth that you want to jump into, yeah, I’d wait for the change to hit.

Q4tQ Are there any sort of Kirin Tor/Tortollan WQs in Shadowlands?

Sort of. I haven’t come across any that are specifically a maze or a match game, but there are some that are really off-the-wall minigames. There’s one in Bastion I enjoyed which launches you into the air and then you have to hit a certain number of specific objectives on the way back down, for instance.

I’m being intentionally vague here because the discovery of some of them the first time is super fun — excuse me, you want me to what? — but rest assured you’re not going to be slogging away to gather 10 bear asses for every daily.

Q4tQ: It’s worthwhile to level two toons through Exile’s Reach, yes, an Allie and a Hordie?

If you’re only rolling a fresh toon to get the story, no. It’s essentially identical — the only real difference is between, “what ho recruit, go kill murlocs” versus, “lok’tar ogar grunt, go kill murlocs.” They’ve been getting really good at writing quest text in a more specific voice, as opposed to “yes %RACE, what do you want?” so this may still be worth it to you, but the opponents, the plot, objectives, and the zone is all the same.

However, I will say that the new tutorial is far better at holding your hand and slowly teaching you how to play a new class than the previous one. If you’re rolling up yet another Hunter you may want to hit up the older starting zones instead — go transmog your gear ASAP — but if it’s a class you’re less familiar with it may be worth hitting up the new experience to really get your feet wet.

Q4tQ: More of a public service announcement. I logged into my main for the first time in months last night. I wanted to clean out my bags and bank for the per-expansion.

Normally I send all my stuff to one of my banker alts. This time I decided to sell it all on the auction house. Now I haven’t used the new auction house since it was released. So I was lazy. I mean really lazy. I just put up everything at whatever price came up and within a few minutes my stuff started selling! Holy frick did I just make over 6,000 gold on royal jelly? All in all I think I’ve made over 20,000 gold now! Who is buying this stuff? But my advice is sell sell sell!

Also as it’s been stated before make a DK and DH on a few servers if you want to save some leveling time later.

It can be tough to predict the market, but right now people are definitely ready to wrap it up and get it all finished, so items like Royal Jelly are definitely in demand. I’d also guess certain raid mats may be spiking right now because of people trying to finish AotC achievements — and even if not, the price on level 120/50 consumables is unlikely to get much higher than it is now.

I’m also curious to see what happens to the price of things like those void grub pets you literally can’t give away right now. I always plan on trying to sell things like my Sinister Squashlings during the off-season, but they never really go up in price, so it’ll be curious to see how those grubs perform.

Q4theQ: Since the expansions are now done through Chromie, we will still be able to go to those places at max level right? Also what level will the zones like Northrend, Outland, etc… be?

So, the way leveling is going to work is kind of tricky. We’ve written a primer on what level you can expect to be when the conversion hits, but the good news is, once you hit level 10, you’ll be able to continue the leveling experience through any expansion you want — Chromie is just the best, most direct way to get there. Based on the level curve, you’ll probably want to stick to that single expansion for efficiency’s sake, but if you change your mind you can just go back to your capital city and start fresh in a new expansion.

If you’re talking old raids, they start at level 30 and then go up from there.

Do you have a song/movie/book you love although you don’t usually like that genre or fandom? Example, you usually dislike romantic comedies but movie xy is a rom com and you adore it.

For me it’s: I’m not at all into hip hop, but have loved Robert de Long’s “Don’t Wait Up” ever since it first came out. Still do.

Look, Sibylle is finishing this one out because she literally ASKED me to.

I don’t like country — I do love folk though, and some of the earlier country kind of skews more toward folk. I’m really not a fan of Miley Cyrus. Regardless, this version of Jolene is going to be in all our heads for the rest of the day.


Blizzard Watch is made possible by people like you.
Please consider supporting our Patreon!
Advertisement