The Queue: I fell down the Hero Forge rabbit hole 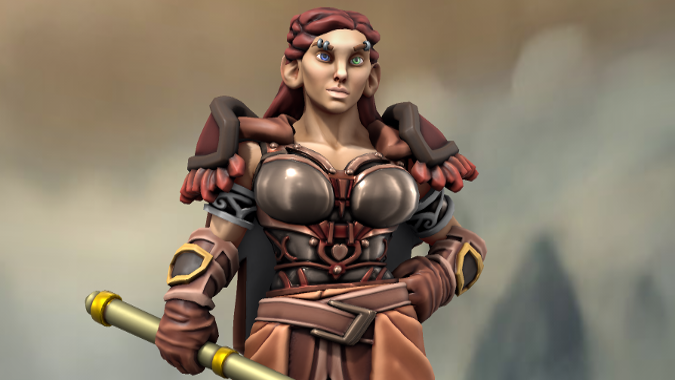 So my Mountain Dwarf Barbarian got an Adamantine Breastplate a few weeks back. I’m wearing it because it renders me immune to critical hits, which, combined with my Bear Totem Barbarian rage ability to resist all damage but Psychic  means that I am really hard to hurt. But it does mean that the really awesome art I commissioned of her isn’t character accurate anymore, and considering real life issues I can’t really afford to commission new art right now. Luckily, Hero Forge just added their paint section and so I spent like six hours making a breastplate wearing version and non-breastplate wearing version of her because that was a better use of my time than panicking about current events.

Now, I’d still rather get a professionally painted mini, because I’m terrible and I did a terrible job, but it was still fun. I really love my crazy little Dwarf maniac. She killed a boat once.

LUOTIANX ASKS ABOUT GEARING UP

So what’s the best way to gear right now? I only had enough pearls for two pieces of Benthic gear, and when I tried to do the cloak unlock I found I couldn’t kill regular mobs. Help?

This will still be my best advice until we get the pre-patch. Once that drops, you’ll likely get your best results from the incoming quests for the Argent Crusade at Icecrown Glacier.

Ok so how weird is it that we STILL don’t have a pre-patch date? Next Tuesday is the earliest day it can hit and that’s becoming increasingly unlikely as today draws to a close.

I am not going to lie, it feels pretty weird. I figured we’d have it by now. I mean, I literally wrote a post saying we’d have it by last week. This week at the absolute latest! And now it’s likely not even going to be next week. At this point I’m barely expecting a two week pre-patch period.

OKAY, MAYBE IT’S JUST ME BECAUSE ARTHONOS DOES USE A CAPITAL A AND I STILL HAD TROUBLE

Q4tQ: If Blizz were to continue rolling out the heritage armor quests during Shadowlands, which two races would best fit with the themes of the expansion? Canonically once we enter the Shadowlands our characters will stay there all expansion, but obviously for gameplay reasons we will be able to return to Azeroth. This is why I think it would still work to show a side quest illustrating some of the events happening while we are away, almost like an interlude.

I mean, they still haven’t done Humans or Night Elves or Forsaken or Orcs yet. No Trolls or Draenei yet. With all the current Allied Races covered, those feel like some pretty big gaps. I mean, technically they haven’t done Pandaren yet, either, but that one’s gonna be tricky. Do you do Horde and Alliance flavors of the set? Color swaps? Entirely new versions for each faction? Or just one set that both faction Pandaren can get? No idea.

I’d personally like to see Night Elves and Forsaken get them. Night Elves because of Ardenweald and all that, Forsaken because they’re the walking dead in an expansion where we go to the land of the dead. It seems fitting. But maybe toss Humans and Trolls and Orcs and Draenei in there, too, because they’ve waited a while and after all, everybody dies. Shadowlands is an equal expansion that way.

FALLANGER, I GOT YOURS IN ONE TRY. THANKS.

qftq: Do you think the expansion or the prepatch is going to be delayed?
im thinking prepatch next week is a good time but there are some things in beta that looks unfinished so maybe Soon(TM)

This expansion will only be delayed if there is a truly catastrophic bug that simply cannot be dealt with any other way. The pre-patch hasn’t been announced, so they won’t actually delay it, they’ll simply drop it whenever they deem it fit. Based on the fact that the Icecrown Citadel quests only have two weeks worth of content, they may have always intended to drop a shorter pre-patch. Regardless, if you don’t announce a date, you don’t have to delay anything.

KALCHEUS AND I HAVE A FUNDAMENTAL DISAGREEMENT

Q4tQ: The more I think about it, the more I feel the Void-State of the Naaru no longer makes sense because of the inherent oppositional nature of the cosmology. Do you think Blizzard is going to revisit it somehow in the future? Maybe even retcon it to be a case of “infection” rather than lifecycle?

I don’t agree with you at all. In fact, I think the very interdependence of Light and Void is very well established both in general mythical/folkloric terms and in the specific Warcraft cosmology. We’re told from the beginning that Void arose from eddies in the Light and seeks to return to a pre-Light cosmos, and we know that both Light and Void clash against one another due to their general approaches to existence — but their differences are ones of interdependence. Light without Shadow is undifferentiated, it has nothing to define itself against, and without the Light the Void wouldn’t even exist.

Each requires the other. In a very real way, Shadow contains and envelops the Light and Light reveals and constricts the Shadow. They are antithetical but necessary to each other. I’m not going to dither on about real world mysticism here, although I’ve written like three books about it (I recommend At Last, Atlantis if you’re in the mood) but I feel like the Priest class in WoW showcases how Light and Shadow can and do co-exist. Each contains and creates the other. Each defines the boundaries of the other.

MOVEWOW ASKS A GOOD QUESTION I REALLY AM NOT GOING TO DO JUSTICE TO, WHICH MAKES ME SAD

Q4tQ: For Shadowlands there’s four Covenant zones, Tor’ghast, and the Maw. The first raid starts two weeks in with LFR being released in January. I see this as four months of strong game play.

Now BfA released two new zones in 8.2 and a reuse of zones in 8.3. If Shaowlands were to get new zones where do you see Shadowlands going? My guess is that Blizzard is about to really open up the scope of WoW like never before. So what do you think, new worlds, new planes of existence, both, or something else?

I mean, Ardenweald teases us with the existence of Fyzandi, a world somewhere in the cosmos that had Elune worshippers on it. And we know there are other places in the Shadowlands besides the realms we’re seeing, Death Knights stole a horse from one of them. I’d personally love it if we got the rough equivalent of BFA’s two zones with two new Shadowlands in 9.1 or 9.2, and then perhaps went to Fyzandi and found out that the Shadowlands were ripped open and leaking into that world too, with the implication that this isn’t just happening to Azeroth. Maybe Fyzandi got dragged in, and is now a formerly mortal world that is stuck in the Shadowlands.

Probably not, though. I doubt we’ll visit or even see much of Fyzandi. But by their very nature you could end up with a whole host of other realms in the Shadowlands, or even outside realms — we know the Drust are invading Ardenweald from Thros, which is a realm stuck outside the Shadowlands because the Drust broke the cycle of life and death and stranded themselves, and are now trying to use Ardenweald as a backdoor into rebirth, so imagine if we got a Thros zone to explore?

Okay, that’s the Queue for today. Be safe, take care of yourselves, be kind to each other.

Blizzard Watch is made possible by people like you.
Please consider supporting our Patreon!
Filed Under: Drust, Fyzandi, Shadowlands, Thros
Advertisement