Now that the Battle for Azeroth has ended and Sylvanas is out and about kidnapping faction leaders, it’s time to reflect on all the war resources we’ve earned and wonder what the heck we’re going to do with them in Shadowlands. Fortunately, Blizzard has a plan for our resources, and that’s to give the WoW Companion App access to multiple expansions in the latest update. Now live and working — at least when the servers are working — let’s take a look at what the Companion App can do for us.

The first thing you notice upon logging in is that as the App loads you are treated to a scrollable feed of the latest news. You can’t navigate from the loading screen, so you’re just seeing short headlines and a small blurb, but if you are genuinely interested in more information we’ll cover the news function shortly. In case you were wondering, the load time both into the App and switching characters does not appear to be substantially reduced with this update, so if you were annoyed by it before, you’ll continue to be annoyed. 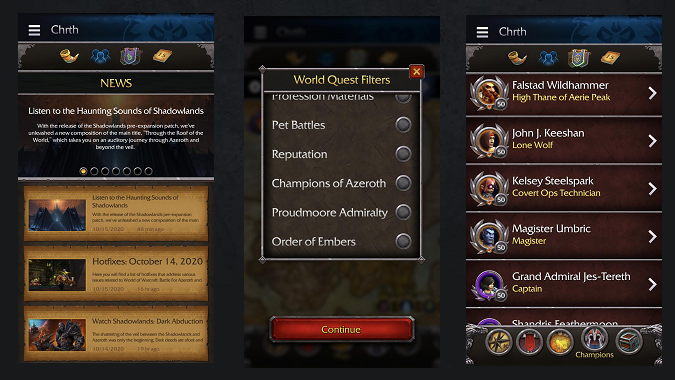 How does the update compare to the original?

When it does finish loading, the first main difference you’ll see is below your character name. There are now four functions across the top: News, Social, Expansion, and Calendar. Social and calendar work the same as before, although it appears it’s not synched to your communities in-game so you’ll need to add them manually until such time that Blizzard fixes this.

The news option is similar to the loading screen, although you can now read the full article within the App. It’s a bit wonky in the presentation, though: the top third of the screen is taken up by an automated horizontal scroll of news articles that has the same content as the scrollable vertical preview of news articles below it. I don’t know if the intention is to eventually make the horizontal scroll only show “high priority” news articles, but right now it’s a waste of space.

Fun fact: I keep crashing out the App if I try to scroll too far down the list of news articles! I wonder what’s so devastating from July that my phone doesn’t want me to read it?

One final UI improvement that I find very helpful is the ability to “favorite” characters. Characters are no longer sorted by level and name — instead, your list of characters are based on when you last logged on to them, with popular ones at the top and those you’ve forgotten at the bottom, regardless of level. By indicating characters as favorites by tapping the little heart on their nameplate, they are always sorted at the top, with the last login sort still in effect with them. Since any of your characters can be favorites, you can use whatever reasoning you want. I’m marking characters that are capable (i.e., fully blinged-out  champions, lots of resources) of running Legion missions to help with gold and reputation tokens, and after Shadowlands launches I’ll be favoriting those with plenty of BFA resources to help me farm the still-relevant Polished Pet Charms. 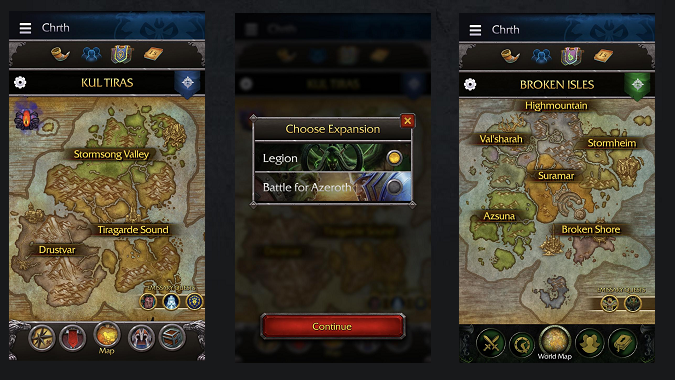 Swap between expansions without having to burn your special hearthstone

Obviously the big sell is the ability to switch among Legion, BFA, and eventually Shadowlands in the App — just press and hold the expansion option to get prompted to switch between them. Just a reminder: Warlords of Draenor Garrison and Shipyard missions were never available on the App, so if you miss failing 97% chance missions you’ll need to head back to Draenor.

The interface is familiar — while there are some minor visual changes, the BFA app looks almost identical. Legion‘s interface has been designed to be similar to BFA, with additional space for expansion-specific options such as combat allies and specified troop types. All of the management functionality such as champion inactivation, armaments, and equipment are also included. For both expansions, the World Quest filter has been updated to include factions so you can easily see which zones have Kirin Tor or Tortollan world quests in them. You’ll also be happy to note that switching expansions is a lot faster than switching characters, and it does remember which expansion you’re currently looking at as you switch characters.

When Shadowlands arrives we’re going to see some expansion-specific content be added. World Quests are being augmented with the new Callings system, and Adventures are the Shadowlands version of Missions, with a more strategic bent. Having the ability to manage Adventures remotely feels like a game-changer for the App, as they’re a lot more interactive than Missions.

While I still yearn for the days when I could run my auctions via the App, the extended functionality that Blizzard is now providing will ensure I spend a lot of my real-world time still in Azeroth.

Blizzard Watch is made possible by people like you.
Please consider supporting our Patreon!
Filed Under: Battle For Azeroth, Companion App, Legion, Shadowlands
Advertisement