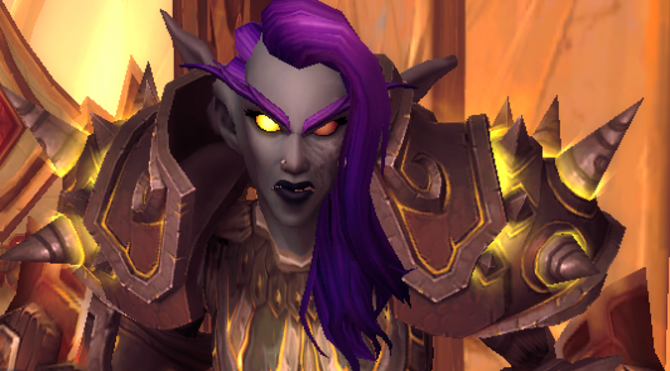 I honestly didn’t even realize Mitch had named yesterday’s Queue the way he did, I was just going with an in-joke for my wife. When I tell her I have to write the Queue for tomorrow she almost always goes and, forcing me to say and the R because it makes her smile and I simply cannot refuse to make her smile, ever.

Anyway, this is the Queue. I’m loving the new customization options so, so much. I am going to run around punching everything.

SILVERKEG MAKES ME THINK OF SILVERCHAIR

Q4TQ: For those of you who’ve been playing the same character for a long time, what is it that keeps you loyal to that character? How do you stay with a character even when Blizzard makes class changes that make you crazy?

Story, really. Specifically, the stories I tell about them.

Like my current extremely angry Nelf, she used to be my happy go lucky Nelf. I’d come up with this whole story about how she decided to blow off the Sentinels and go on a kind of world tour of Azeroth, ended up friends with the weirdos in her guild, and found herself constantly dragged into weird events she had no idea about. “Ragna-what? Whatever, he doesn’t even have any legs, how hard can he be?”

She was extremely young for a Night Elf, barely a hundred, so the loss of her immortality didn’t really click for her — she still had that same feeling of being immortal all young people have, where death seems so far away and unimportant. She was the baby of her extended family, and not just her parents but all of them — her grandparents, cousins, aunts and uncles, coddled her and let her get away with whatever she wanted, figuring she’d grow out of it in a few centuries.

Meanwhile, my oldest character, my Human, is a survivor of Arthas’ purge of Lordaeron and the rise of the Forsaken. His family farm is in the Glades — currently it’s underneath a huge column of destruction from the Alliance army marching to Lordaeron. I’m never going to do an expansion where I don’t level him, because he’s such a part of the game to me, and his curmudgeon act masks a deep well of pain and loss that’s fascinating for me to think about.

Plus Warriors have Charge and I love that so so much. I’ve been playing Warriors since 2004, it’s not likely any change they make will stop me now.

Well, let’s ignore the whole “The Amani Trolls nearly destroyed Silvermoon 2800 years ago except the Humans decided to step in and screw the whole thing up because the Elves bribed them with 100 mages” thing and say okay, the Amani are that mad at the Horde. It feels unlikely, but I’ll go along with the gag.

The main problem with this, the Horde already got the perfect counter to this. The Blood Elves joining the Horde is exactly the same level of forgetting that whole deal 2800 years ago, and it ignored the whole bit where the Orcs and the Trolls (specifically the Amani) nearly burned down Eversong Woods and killed a whole bunch of Elves, including the entire Windrunner family minus the three sisters.

So instead of trying to come up with a thematic counter to the Amani, I’d just give the Horde Ogres. Playable Ogres. Because why not?

SIBYLLE ASKS IF I’M DISAPPOINTED IN THE CHARACTER CUSTOMIZATION YET

QftQ: After playing barbie for a day or two and enjoying the seriously beautiful options, what did you find annoying or what disappointed you because you expected it and it isn’t there?

Honestly, nothing. I mean, I want more — more hairstyles including undercuts and shaved sides, for example, more scars, more places to put scars, I want more for I am forever greedy for more customization options. But there wasn’t anything that I didn’t get that actually bothered me.

I’m so happy with that face. Sure, I’d rather have a more undercut style than the Sombra, but overall I really love it and I’m super happy overall with just how much she wants to punch literally everything she possibly can.

Why is Ankylosaurus so unappreciated?

More importantly, have you read any Loren Eiseley? And what do you think?

And, you’re my man-crush. Keep being magnificent.

Most people don’t really understand the evolutionary complexity of the various Ankylosaur and Nodosaur species. But we’ve really started to find some amazing nearly mummified specimens that have showed us a great deal of new information about these wonderful animals.

Back in college, I read All The Strange Hours and it’s had a real effect on me and my writing ever since. Eisley was an astonishingly deep thinker, and I have never been able to walk away from one of his books without feeling humbled and grateful, having learned something just in the observation of his mind.

And while I doubt highly my own magnificence, I appreciate your having said something kind about me. Thank you.

now that you can level in any zone which one is going to be your favorite?

Honestly, I’m trying to avoid just running all my alts through Warlords because it feels like that’ll be the fastest to 50. I think I’m going to just run a 10 — 50 Azeroth first and see how I feel about it, play with the Cataclysm revamp. I suspect I’ll be enamored the most of either Shadowmoon Valley in Warlords, Nagrand in Outland, or Borean Tundra.

What happens if after starting Draenor and build the Garrison you decide you’d rather go to BfA to level?

Well, I just got tired of Cataclysm leveling on my Kul Tiran, ditched it, and went to Draenor instead and it worked fine, so I suspect you’ll be okay. BFA is set up to be the default 10 to 50 experience now, so it shouldn’t matter if you decide you’re done with Warlords early and skip straight to Zandalar or Kul Tiras.

Q4tQ about warrior transmog, since Mr. Rossi’s writing it:

Can you recommend some good Old God-themed 1H weapons? My void elf warrior is looking pretty deadly in the classic AQ40 set, but I’d like to find some weapons that really fit the theme. I have two other max-level warriors, so I should be able to hunt down just about anything that’s not in a BfA raid.

I love the Silithid Claw from AQ40, along with the Sharpened Silithid Femur and Ancient Qiraji Ripper for the classic bug weapon look. If you just need something with a big eyeball on it, Unguent Caress from Ny’alotha’s version of Ra-Den might work. The weapons from Madness of Deathwing actually don’t really scream Old God when I look at them, but there’s a bunch of them and you might feel different, including No’Kaled the Elements of Death.

If you’re okay with Sha-themed items (hey, it’s Old God adjacent right?) there’s Kilrak, Jaws of Terror or you could go with Treachery’s Bite or the Clattering Claw from the Cataclysm fives. Oh, and Garrosh Hellscream in Siege of Orgrimmar drops this mace, which has a bit of that Old God feel to it. It’s an int mace, but if you get it, you can still use it for transmog.

If you could bring one class from any other mmo into wow, what’d it be?

For me, i think it’d be XIV’s dancer. Not only is it a very animated class, with cool throwing weapons, i love its support nature.

The Trooper, from Star Wars The Old Republic.

Look, I know it’s ridiculous. But I want a heavily armored Gnome shooting things with a chain gun, okay?

Okay, that’s the Queue for Friday. Thank you to everyone who asked questions, especially after I asked for them. Remember to ask lots of questions for Cory next week, and Liz will be back next week so don’t worry about too much of me per week.

Blizzard Watch is made possible by people like you.
Please consider supporting our Patreon!
Filed Under: Character Customization, Customization, Punching Things, Transmog
Advertisement