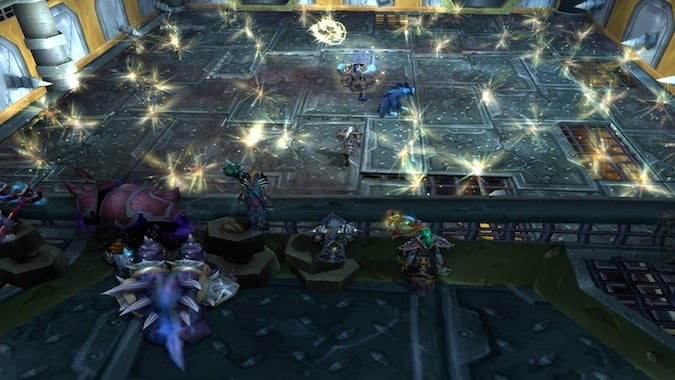 If you’re into World of Warcraft’s Brawler’s Guild, you may be upset to find that it’s currently closed as we wait for Shadowlands. But please, don’t panic — this isn’t the first time the Brawler’s Guild has closed to wait for the next expansion, as we saw the underground arena go on hiatus during the Legion and Battle for Azeroth pre-patches, to be retooled for the next big thing to paraphrase the bouncers.

If this Season — Season 5, to be precise — of Brawler’s Guild follows the previous pattern, we’ll see a re-arranged and in some cases redesigned series of fights, with new rewards for the Season. We don’t know what those will be yet, but it seems to follow the pattern of previous Seasons and considering the hiatus periods we’ve seen before it should be along those same lines. Also, if any fights from previous Seasons are removed, they’re not entirely gone — the Challenge Card system will allow a player to go back and do a fight from Seasons 1, 2, 3 or 4 that’s been removed — although we don’t know which ones will be removed yet, of course. I hope Oso isn’t removed, but if my favorite starved bear doesn’t return, we’ll always have Challenge Cards.

So here we are. The Brawler’s Guild is closed for now, but it’s been closed like this before, so it’ll likely be back with new encounters and new goodies sometime in the first major content patch for Shadowlands.

Blizzard Watch is made possible by people like you.
Please consider supporting our Patreon!
Filed Under: Brawler’s Guild, Hiatus, Shadowlands
Advertisement