The Queue: Are we there yet? 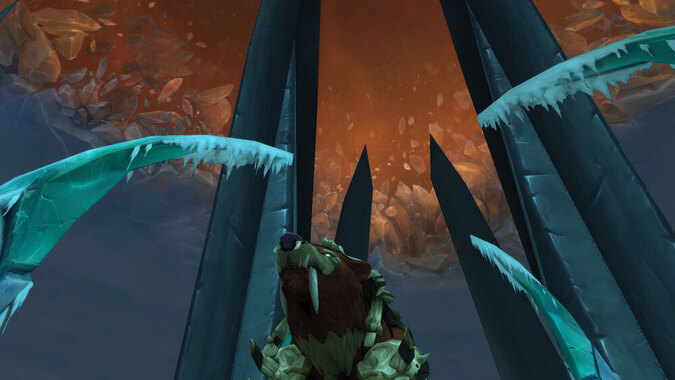 GALDWYNN IS SCREAMING, AND THE FIRES ARE HOWLING

Q4tQ: Hogger next release for Heroes?

Most likely! They’ve been known to do some fake-outs in the past but it’s looking really strongly in Hogger’s favor. In fact, by the time the Queue goes live, we may have already gotten news about him popping up on the PTR!

I can’t believe that I didn’t even think of Hogger as a potential hero. It makes so much sense! I still want Pharah to be added though.

Edited to add: Here’s his information!

RED’S IN THE SHADOWS WITH A GUN IN HIS EYE, AND A BLADE SHINING OH SO BRIGHT

So, three days before Shadowlands… have you picked your Covenants yet, Queue?

I’ve had my Covenant picked for my main picked since BlizzCon! Venthyr bear all the way. My alts have been a little more fluid though. I’m mostly certain that my Demon Hunter is going to be a Maldraxxian, the shield ability they get is super great and honestly, I’m a little sad that my bear won’t be getting to use that. My Shaman is going to be hanging out in the trees of Ardenweald. Which leaves the Kyrians for my Mage or my Warlock, whichever I decide to do next. But that could still all change with my whims, or when I get to test out the different class abilities while leveling.

QftQ: I was doing the pre-patch stuff and I noticed, when we snuck up on Herald Dalora, she says something about death coming for the soul of this world. I can’t help but wonder if that ties in to how we learned about Azeroth being a world soul?

Oh most definitely! We’re still not sure what the Jailer’s plans are in the long term, but from what we can figure out so far this is my guess. Souls have Anima which powers everything in the afterlife, so a whole planet’s soul must have a planet-sized amount of Anima to collect. Since everyone is winding up in the Maw, the Jailer might be working with Sylvanas to try and help kill Azeroth so that he can get his greedy mitts on all that juicy Anima.

Somebody should probably stop him.

Q4tQ: Confess something WoW related that embarrasses you.

Mine is: I enjoy archaeology and fishing. Without getting anything in particular – so it’s not for rare rewards or anything, but simply the activities themselves. It’s not like I want to do them all day, but I enjoy it when I do them.

Back when Cataclysm released I made a big push to try and get one of the Realm First profession achievements, but I didn’t do any research so I was pretty sure that I wouldn’t be able to max out any of the usual ones. So I settled on trying to get Archaeology.

However I also didn’t do any research on that, so I kind of spent the first day of my expansion just flying around as fast as I could doing Archaeology haphazardly, and not really enjoying myself. In the end, I didn’t even get the achievement!

I’m pretty embarrassed that I wasted the opening fun times of my expansion to chasing an unfun achievement.

ROXXII IS GONNA HIT THE HIGHWAY LIKE A BATTERING RAM, ON A SILVER BLACK PHANTOM BIKE

Okay Queue I need help figuring out which of my fresh 50s I’m gearing to round out my Covenant 16. My main is going Necrolord and that’s the only for sure thing. I can make my dwarf shaman Kyrian or Night Fae. Beyond that my goblin hunter, dark iron hunter, and my lightforged hunter can take the other two but the goblin has to be included. Who do I put for the other three Covenants because only one of the two Allied race hunters is getting prepatch geared.

Send your Dwarf Shaman to the Kyrians, make your Goblin Venthyr, and the Dark Iron gets Ardenweald. Then you can make your Lightforged a Necrolord if you want to level them. Just in case that Tame Undead book winds up being a Necrolord only thing. I like the idea of a Lightforged who’s controlled a couple of undead beasts to fight for them. It’s got a great yin/yang feel to it.

QFTQ: If the “Death’s Rising” event had been more prolonged and more like the prelaunch Legion invasion points with six zones being chosen instead of just Icecrown, which six zones would you have chosen as ideal Scourge invasions and what prominent NPCs in each zone would you have liked to see lead the defense?

Loch Modan: Have the Dwarves of Ironforge come out to keep the dead from reaching Ironforge itself. With the Undead invasion centered on the lake and featuring lots of undead sea creatures.

Un’goro: The forces of the Earthen Ring and Cenarion Circle have been pulled away from their vigil at the sword of Sargeras to deal with the rise of undead Dinosaurs in Un’goro.

Jade Forest: The conflict between the Horde and Alliance left a lot of dead soldiers in its wake, the Jailers forces raise an Undead army from the remains and it’s up to the Jinyu and Hozen to put aside their differences at work to stop it.

The Hinterlands: All of those Troll sacrifices start waking up, and they’re not happy. Wildhammer Dwarves lead the charge against them involving lots of gryphon riders.

Dustwallow Marsh: Swamp Zombies! Tauren forces from Mulgore are the only thing stopping the barrens from being overwhelmed by legions of smelly rotting corpses.

Icecrown: Keep Icecrown and the Argent Crusade forces. It’s been nice taking a trip up there to see them again — I bet they’ve been lonely.

It’d be a lot of work but if each zone could get a small quest line similar to the two weeks we got in Icecrown that would’ve been really cool. Give us lots of little lore tidbits to hook into the Shadowlands zones. With a reward for someone if they do the quest chain in each zone, maybe a title like “Zombie slayer.”

I’ll see you in the Shadowlands! Don’t forget to leave Anna lots of questions to answer while you’re busy righting the wrongs of the afterlife!