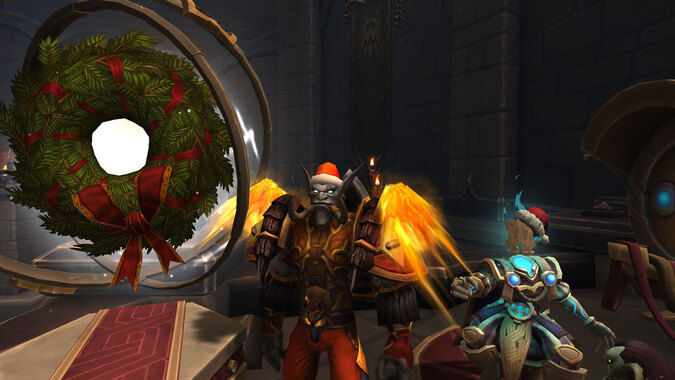 My guild got Normal Sire Denathrius for the first time last night, and all I got was this festive Winter Veil hat.

Betty White would be a Paladin. She can clearly throw down with the best of them in the thick of things, but she also seems to have power over life and death. She is older than sliced bread after all.

ALEX CLERM IS OLD THERE, OLDER THAN THE TREES

Earlier this week I realized I recently passed the 10 years mark on my WoW account. While it wasn’t active 100% of that time (about 85% I’d say), I’m still kind of disappointed Blizzard didn’t recognize this in any way. Heck, even Wowhead gives me heads up when my account goes through an anniversary.

Q4tQ: Would you like long-term milestones to be acknowledged by the game? A certain number of years, a ridiculously large number of kills, an insane length travelled… Not as achievements per say, but maybe a title like “Old man [name]”. Or is this another cursed information you’d rather not know like /played ?

Congrats on your ten years!

I don’t mind knowing how long I’ve been playing in that kind of time frame — I just checked it’s roughly eleven years, give or take six months — I just don’t ever want to see my /played again. The last time I checked I swore off ever checking again, and that was back in Mists of Pandaria, that number only has gotten more outrageous since then.

I would like to see them update their achievements with bigger ones though. It’s been so long since my mains have gotten another Got my Mind on my Money. Does that mean that their minds are no longer on their money, are they no longer laid back? Maybe they’re super parched because they haven’t had any juice — with or without gin! Seriously though, I love getting neat information about my character like that. Give me way more stats for my character. I don’t even need the title, I just want to know weird things like how many times I’ve had my food buff interrupted with less than a second before getting the buff, or how many laps around each circular city I’ve run. My Shattrath would be low, but my Dalaran would be so high!

Is it just me or is Larion vs. Phalynx kind of a lame reason for a “rivalry that has spanned eons”? I mean, on a scale of 1 to “My name is Inigo Montoya. You killed my father. Prepare to die”…

Those are the best kinds of rivalries to span eons. It’s something important, but not so important so nobody is going to start a war over it. Larions can fly, Phalynx don’t need to eat. Phalynx break down, Larions can heal over time without having to go machine a bunch of new parts. It’s cats vs dogs all over again!

Low stakes disagreements are where the most fun can be found. Warcraft could do with a few more that don’t reach quite the same fervor of Horde vs. Alliance, Gnome vs. Goblin, Sika vs. Kevin.

I sided with the Larions though, flying bitey tiger lions are definitely the best.

TO THE PLACE RED BELONGS

Smash gets characters from everything. Hell, even Minecraft.

Q4TQ: how likely do you think it is for a character from the Blizzard universes to make it into Smash? And who would it be?

Well, a little over a year ago Jeff from the Overwatch team said that Nintendo could use any of the Overwatch characters for Super Smash Brothers if they were interested. Since then we haven’t seen any Blizzard characters who’ve made the leap over, but I’ve never given up hope.

I think that there are three big choices. Not Deathwing though, he’d be far too big of a choice. (Because he’s so large, get it?) They’re all flagship characters that have had statues made of them and are instantly recognizable for people who might not have even played their games.

Question for the Queue
What are your thoughts on the steward that collects things your character touches? Touches being items related to quests you do and achievements. I like it, going to try and do every achievement in quests and exploration for shadowlands to see how my biggest fans collection grows.

I didn’t know about this until now, but I love it. I’ve always liked the idea of having something in-game to help show off your accomplishments. Those statues in the Garrison feel like the closest we ever came to that, and it’s a little sad that we didn’t get something we could decorate in expansions after that.

Every time I hear something new about the Stewards I just love them even more. Blizzard really knocked it out of the park with them.

This is my last Queue before Christmas, so if you’re celebrating that have a very Merry Christmas! If you’re not I hope you a safe and happy holiday! Hopefully whatever you’re doing is full of delicious food and fun times!!