The Queue: A year and change! 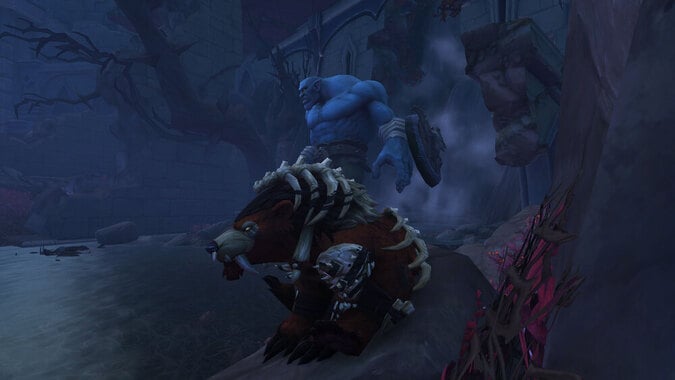 It’s hard to believe that I’ve already written a year’s worth of Queues. Well, it’s a couple more than a years worth, with Queues that I’ve covered for other people sometimes. We’ve come so far from that first one I wrote all the way back in 2019! Remember when I was only going to be doing this for six months? I’m super glad that Anne got picked up full time at Blizzard. Both because she most definitely deserves it and is a rockstar — and so I could keep jabbering away every week with the best group of commentators in the World (of Warcraft)!

Before we jump into today’s Queue, let’s take a quick trip back to see how well the answers from my first Queue hold up.

Toss a Coin to Your Witcher was the first proto Anna Earworm™! It’s still so catchy!

WHEN WE GONNA SMASH BAD BAT!?

Then every day after that until I’ve gotten my very own bat. I just reinforced the Anima tether to the area too, so I don’t even have to worry about whether I can make the bad bat spawn.

I need to know!

How do you rate Shadowlands based on your experience thus far?

I’m rating it four stars, maybe four and a half. I really have been enjoying the content we’ve gotten so far. The dungeons are nice and varied, the raid is super fun, and I really like hanging out with my Venthyr buddies. There’s just some stuff around the edges that have been less fun, like how grindy it’s felt to try and get Anima, Torghast also feels like they could swing for the fences a little more with more unique and potentially game-breaking powers. We need more things like the Mage blinks causing additional Mirror Images and less Druid Root powers.

Here’s the poll link too if you missed it.

SIGN FUZZYBUNNY UP, ‘CAUSE I’M IN THIS VIBE AND I GET SYNONYMOUS

Is it me you’re looking for?

TWO-HUNDRED SOEROAH-PER-HOUR WIT’ A BLINDFOLD ON

Still wish the Revendreth afterlive cinematic had an in-game trigger

It does! There are copies of the message that Sire Denathrius is writing in the cinematic posted around the zone, you can click on them and that’ll play the cinematic for you. I haven’t accidentally moused over one in a while though, maybe they only work if you haven’t gotten through the zone storyline.

RED ALWAYS ASKIN’, “WHERE DID I GO WRONG?

Q4TQ: do you think Blizzard will ever do something about the Injured Carnies at the DMF?

Ever since First Aid was removed, they’re just there… sitting injured, and there’s no treatment or cure or relief for the poor guys and gals. It’s heartbreaking.

It’s a hard life being a carnie. Never mind that these are carnies who work for a carnival in a fantasy world with dragons, sea creatures, and definitely no Old Gods operating in secret. Nope, there definitely aren’t any of those at the Darkmoon Faire, just good wholesome rides, concerts, and crunchy frogs for the whole family.

The collateral quests to just get your Ember Court up and running are slightly excessive.

They were certainly pretty involved. Especially for that first week when everything was so fresh and pulling you in seventeen different directions. I will agree that the one to kill thirty enemies in Ardenweald for the pure water could’ve stood to be chopped down to half as many. I’ve been having a bunch of fun with almost all of the others though! I like that I’m getting a chance to hang out with some of the big names of the other Covenants. Like Marileth and Sika! I was sad that my Venthyr wasn’t going to get to spend much time with them because they’re amazing characters. But now I get to throw fancy parties for them, tailored specifically to their interests! Just don’t bring Marileth and Sika in the same week, because they do not have compatible interests.

The only quest that really stood out as excessive was securing Droman Aliothe’s RSVP. I’m all for a “trade junk amongst vendors until you get the precious item” mechanic, that’s a classic. This one just wound up being so much travel around the Shadowlands that I wasn’t even that excited when I was finally done. It turned the fun character beat into drudge work. So much so that I haven’t invited her back, I don’t want to risk the chance that I’ll have to do the whole thing over again. Which is a shame, because I like her character and she’s a giant bear! What party isn’t improved with a giant bear?!

Here’s to the next year of Queues! Until next week — be excellent to each other, and leave Anna lots of questions for tomorrow!