Here’s what to expect in Torghast’s second special event, Chorus of Dead Souls 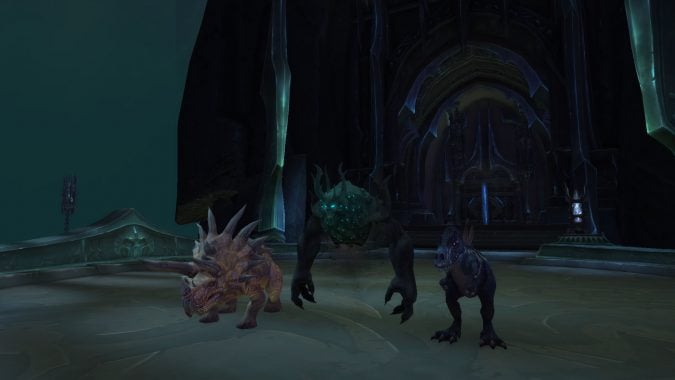 This week marks the second of three special events on rotation in Torghast. Like the previous special event, this one is based around the idea of a special ability that is unlocked and augmented via Anima Powers. For the Chorus of Dead Souls, you become… a Deadsoul Chorus, a creature you normally encounter while running the Mort’regar wing of Torghast. Selecting the the Anima Power Howling Soulcore when you enter any of the normal wings — this event is not active in the Twisting Corridors — gives you an Extra Action Button that allows you to transform into a Deadsoul Chorus.

While in Deadsoul Chorus form, your action bars are replaced by a preset group of 5 abilities. These abilities are:

When transformed into the Deadsoul Chorus, you retain all buffs and Anima Powers, as well as being scaled to your abilities, so don’t avoid Anima Powers that buff your stats or damage. In addition, you can have pets out — although you lose access to the pet toolbar — that can tank or DPS for you as normal. Remember that Wailing Blast is a ranged ability, so if you have a pet tank you can stay out of melee combat, just make sure they’re in range of your Scream of Pain.

What is probably the most important and powerful aspect of the Chorus of Dead Souls is that switching between forms is instantaneous and has no cooldown. While most of the Anima Powers are about buffing you while in Deadsoul Chorus form, switching back to your normal form gives you access to your standard array of abilities. As a Necrolord, I made sure to recast my Fleshcraft every 2 minutes because of the damage gains by having the buff. It was also useful for casting Bloodlust before big pulls, and for throwing the occasional Exhilaration on my pet. 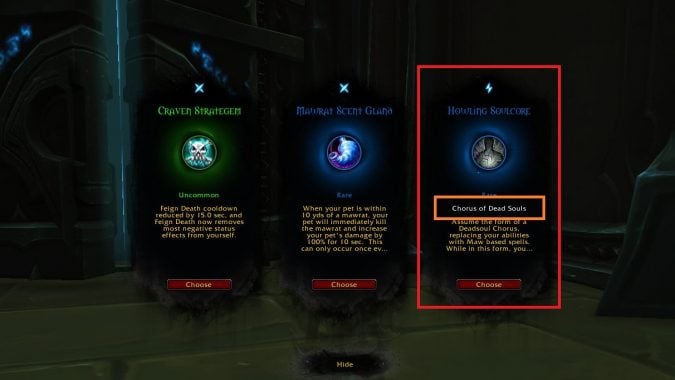 Like an actual chorus, the more power and people, the louder it gets

Besides the standard array of buffs available, there are some game-changers as well. If you can acquire the Essence Siphoner early you’ll find yourself awash in Phantasma, and Soulburst Charm gives you a powerful stun and damage that by the end of my run I was using constantly. While the early floors were a little bit on the slow and boring side with the reduced number of abilities, by the time I got to floor 5 I was a veritable death machine, collecting a dozen mobs at a time and just melting them with Soulburst Charm while keeping my health topped off with Dangling Soulcatcher. The final boss gave me zero difficulty, the first time that has happened on a Layer 8 run.

The event is also well-designed for a group of friends. Only one person (tank is a good choice) chooses to become a Deadsoul Chorus, and everyone else can hop on, keeping their standard array of abilities while also benefiting from the Chorus-related Anima Powers. Even better is the fact that you can cast while moving! The only negative to the group experience is that Return to Existence and related abilities should likely be avoided otherwise you’re interrupting the flow of the team.

Overall I feel this event is significantly more enjoyable than the prior Beasts of Prodigum one, which too often relied upon finding the right combo of Anima Powers and dealt with the typical issues of pet AI. I did find a couple of glitches — some interactable items like caged souls and chains weren’t usable when transformed — but nothing game-breaking. While there are no additional rewards for completing it, it did feel noticeably easier enough that you should be able to push your highest layer completion, or if you’ve already cleared Layer 8, get a quick pile of Soul Ash.

So if you’ve been avoiding Torghast I recommend heading back there this week and giving the Chorus a try. It’ll be up until the weekly reset, and after that we won’t see it again for 12 weeks, so be sure to play with it before it’s gone.

Blizzard Watch is made possible by people like you.
Please consider supporting our Patreon!
Filed Under: Bonus Event, Chorus Of Dead Souls, Shadowlands, Torghast
Advertisement