How to get the Snowstorm bear mount in WoW

The Snowstorm mount is a gorgeous-looking bear made in celebration of Blizzard’s 30th Anniversary. But how can you pick up this beauty? It’s included in two of the three versions of The Celebration Collection bundle of digital goodies: the Heroic Pack ($40) and the Epic Pack ($60). Be aware that there’s also a cheaper version of this bundle — the Essentials Pack ($20) — but that version does not include the Snowstorm mount.

The difference in price is because each version of this pack contains a multitude of additional items that celebrate other Blizzard titles. If you’re only interested in World of Warcraft (and in obtaining this particular mount) the middle tier of the bundle might be all you need.

But if you also play Hearthstone, Overwatch, or Diablo 3, and would like to get all the goodies for those games as well, there are reasons to consider upgrading to the Epic Pack. Doing that will also cater to your WoW needs, since that version of the bundle includes 30 days of free game time — which normally has a value of $15, meaning that you’re only really paying $5 for the upgrade. 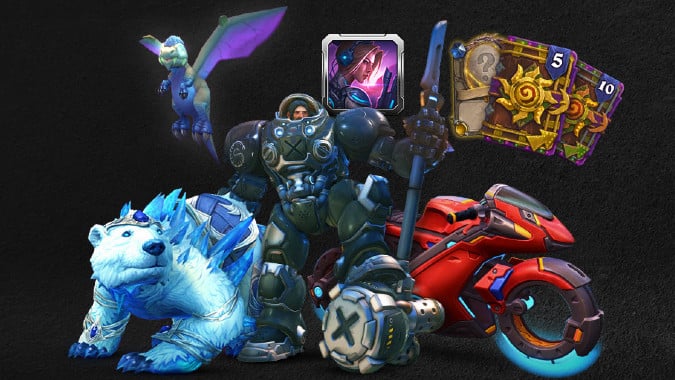 A storm of icicles — a Blizzard Bear, if you will

This is the second time Blizzard has added a snow-themed bear to WoW to celebrate their games: if you attended BlizzCon 2008, you were gifted a code to the Big Blizzard Bear mount. Sadly, that original bear mount cannot be obtained in-game any longer — not even from the Black Market Auction House. (You may still be able to find codes for it on sites like eBay, but expect it to go for a truly outrageous price.) As a consolation prize, for the game’s fourth Anniversary, Blizzard kept with the theme by having the Baby Blizzard Bear battle pet enter the game.

Unlike the previous celebratory bear mount, and other polar bear mounts (such as the White Polar Bear that is a reward from Brunnhildar reputation), Snowstorm has a lot going for it, with its higher-resolution graphics and unique animations.

For his summoning animation, the mount itself becomes visible before the casting is finished, as it bursts into reality from an actual snowstorm. And its /mountspecial animation is also very interesting, having the bear follow a snowflake with its head and make it explode in a flurry of ice. You can check out those animations for yourself on this video.

The bundles containing Snowstorm will be available from the Blizzard Shop until September 15, 2021.