The Unbridled Darkness Torghast event is live this week and asks: are you afraid of the dark? 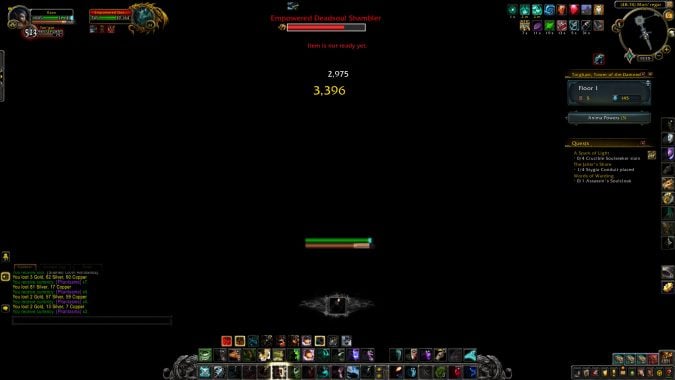 This week is the Unbridled Darkness bonus event, the final of three special events on rotation in Torghast, and this is the first of the events that appears to have been inspired by a decade-old April Fool’s Day joke — the Tomb of Immortal Darkness. For this event if you choose the Flask of Unbridled Darkness, the Vial of Unbridled Darkness, or Uncontrolled Darkness (parties only) at the start of the run you’ll be given an extra action button that when clicked, turns the environment black — that’s right, you can’t see anything that isn’t provided by the UI — but you get a boost to power and movement that increases as you add more Anima Powers to the mix. Are there pools of bad that’ll kill you? Sure. Are there mobs that are getting ready to attack you? There’s no way to know — sort of. Fortunately, the UI will display nameplates unless you turn them off, and the minimap can be monitored to ensure you’re not going to fall off a cliff.

The main difference among the Flask, Vial, and Uncontrolled Darknesses is how long the default effect lasts. For Flask, it’s dark for 30 seconds and has a cooldown of 60 seconds, whereas for the Vial you have darkness for 15 seconds and a cooldown of 90 seconds, meaning you’ll be fighting in darkness fewer times during the run than if you get the Flask. Both of these have an initial boost of 75% damage and 30% movement, which isn’t too shabby. Uncontrolled Darkness is a different mechanic entirely, as every 5 kills it swaps status — kill five mobs, everything goes dark; kill five more, vision returns — hence why it’s considered uncontrolled. The advantage of not being able to control when you have to fight in the dark is 150% damage and 50% movement at the start of your run, but I’m not entirely sure that’s worth it when it seems likely you could end up fighting a boss without having the benefit of your Unbridled Darkness abilities. 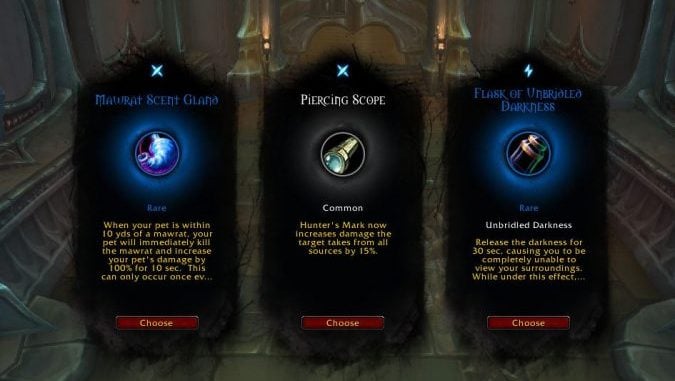 You attack the darkness!

Like the Chorus of Dead Souls and Beasts of Prodigum events there’s an additional array of Anima Powers in the mix to bolster your skills while fighting in darkness. Most of them are your standard health and damage boosts — 75% quickly becomes 200% — but there are also some that are designed for groups so that if multiple players are in darkness they boost each other by a strong amount. Of course, there’s also some you might want to avoid while in a party such as the Wild Flail of Tollar, which can damage other players if you’re not careful.

So is it worth fighting in the dark? That’s really going to depend on the type of player you are, especially if going in solo. If you’re a big fan of moving around during fights and dancing from mob to mob, you may find the playstyle during darkness annoying if not fatal. If you’re ok with pulling a bunch of mobs and then popping darkness to (hopefully) AOE them down quickly, then this bonus event is for you. It’s also useful with many of the boss fights as the extra damage you can dish out in darkness can help you burn them down faster providing you survive any area attacks you’re incapable of avoiding.

I feel like where it really shines is in a party setting with a standard array of tank, healer, and 2 or 3 dps characters. The healer obviously doesn’t want to choose darkness, and the tank should likely avoid it as well, but having your dps players group together and pop darkness every time the tank groups enough mobs together can result in the party exceeding their normal progress — as long as the dps players don’t accidentally run off a cliff.

If you say you’ll never be scared of the dark then this event may be for you. If you want to check it out, do so now, as it won’t be back for another 12 weeks.

Blizzard Watch is made possible by people like you.
Please consider supporting our Patreon!
Filed Under: Bonus Event, Shadowlands, Torghast, Unbridled Darkness
Advertisement