What’s a ‘D&D movie’ and how can it help you set up and run a campaign? 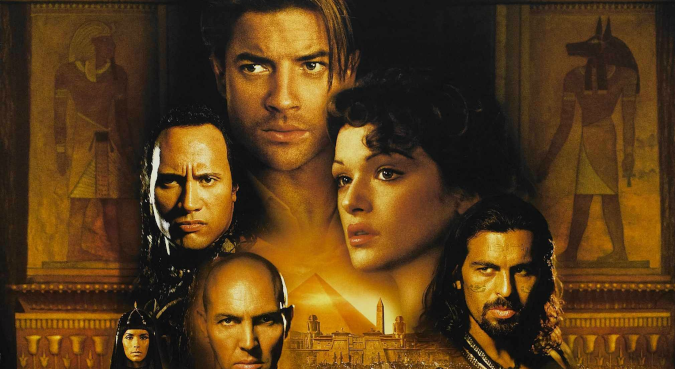 One of the things I talk about in terms of running a Dungeons and Dragons campaign as a DM is how helpful it is to take inspiration from other sources, and those sources don’t have to just be fantasy novels and movies, either. A trick I picked up years ago was taking various movies and TV shows and using them as a blueprint — take apart the plot of the source material, look at how it works as if it were a series of D&D modules. A perfect example is the 1999 film The Mummy starring Rachel Weisz and Brendan Fraser.

The movie is an almost perfect breakdown of a D&D campaign, to the point where it can be taken apart and looked at as a series of modules. The opening scenes are the Session Zero, showing us who the characters are, while the trip to Hamunaptra and the attack by the Medjay on the riverboat and the arrival in the city are the first module, then the exploration of Hamunaptra and the freeing of Imhotep make up the action of the second module. Finally, in the third module, the heroes gather their forces and unlikely allies in the same Medjay who attacked them in the first module, and rush to Hamnunaptra to defeat the titular Mummy, Imhotep, before he can accomplish his ritual and achieve true immortality.

With time, you’ll start watching every TV show and movie with an eye to using it in your D&D game

This one movie could serve as the blueprint for an entire series of adventures for your D&D campaign, and you don’t even have to be obvious about it — you can set the adventure in the frozen mountains of your campaign setting, change the Mummy into an ancient dragon or demon or what have you. The point is, you have the entire structure of a serialized adventure laid out before you, ripe for adaptation. Heck, the main characters of the movie map out almost perfectly to a D&D party, with Rick O’Connell a snarky Fighter, Ardeth Bay a stalwart Ranger, Evelyn Carnahan a tombs and treasures obsessed Bard, and Jonathan Carnahan almost too perfect as a Rogue, while Imhotep makes a perfect Cleric/Lich. It even holds up into the sequel, with each character leveling up and discovering new abilities — Evie in particular focuses on combat related feats and gains quite a few levels in the sequel, and the story of saving their son from the Mummy and his quest to secure the army of a god is tailor made D&D fodder.

While The Mummy might well be the perfect D&D movie, it’s hardly the only one that comes to mind. For example,  Guardians of the Galaxy has the same basic elements — powerful villain in the background in Thanos, more immediate villain to be foiled in Ronan the Accuser, a ragtag band of misfits assembled by fate to prevent Ronan from getting his hands on a powerful artifact, a series of adventures that unfortunately end in the villain getting the artifact, and a final confrontation to prevent the villain from using said artifact. This is a long term D&D campaign absolutely handed to you. You’ve got the Barbarian meat shield in Drax, the cocksure quipster Rogue in Peter Quill, the terrifying Assassin in Gamora, a genius Artificer with Rocket, Groot as a unusual Druid, and later additions like Mantis (a Monk if I ever saw one) and Nebula who totally just stole Gamora’s idea and made it edgy just serving to flesh out the ensemble in an extremely D&D party sort of way.

I love when a source serves so well to help show you ways to set up and deliver an extended, serialized story in this way. One example is the Star Wars movies. The original trilogy works exceedingly well, so well that frankly a lot of people have stolen it for their D&D campaigns over the years. But it works — Obi-Wan as a player’s first character, an elderly wizard who takes on another player’s character as an apprentice, only to die early in the campaign. Luckily, the player just took the NPC Princess and rerolled her as a PC and the party went on from there. But the series of events — giant evil weapon is destroyed, evil Empire seeks revenge and hunts the heroes, only for the heroes to finally get the chance to strike at the archvillain behind the entire evil Empire at the site of his attempt to rebuild the evil weapon of the first adventure? It’s tailor made for a D&D campaign.

Whether it’s Willow, one of my favorite movies, or the comic book series League of Extraordinary Gentlemen (but avoid the movie, it’s not very good) or the Legends of Tomorrow TV series or the Mass Effect series of video games, you can find a lot of inspiration in various long form storytelling that combines the serialized nature of these stories with large ensemble casts that provide examples of how a D&D party might exist in those stories.

Now, your group of players won’t act exactly like those groups did. In fact, they’re likely to do something you don’t expect, like refuse to go to Hamunaptra, or make an alliance with the Medjay immediately and try to go in and kill Imhotep immediately instead of accidentally freeing him, but that’s fine — the important thing is that the inspiration serves as a scaffolding for you to hang your own stories off of. It’s not hard to allow the players to try and fail to kill the Dragon Lich, and then they have to stop him from taking his vengeance out on the nearby city of Portsheart, and you’re back at the races again.

It’s all in service to your game, remember. If in your game the character who looked like he was going to be the chosen one ends up dead and his sister ends up saving the world, that’s fine, you’re not looking to put on a fully realized, beat-for-beat adaptation of Return of the Jedi. You’re playing a D&D game.

Blizzard Watch is made possible by people like you.
Please consider supporting our Patreon!
Filed Under: D&D Adaptations, D&d Campaigns, DMing, Guardians Of The Galaxy, How To Run A D&D Game, Mass Effect, The Mummy, The Mummy Returns, Willow
Advertisement