The Queue: The Goggles, they do something 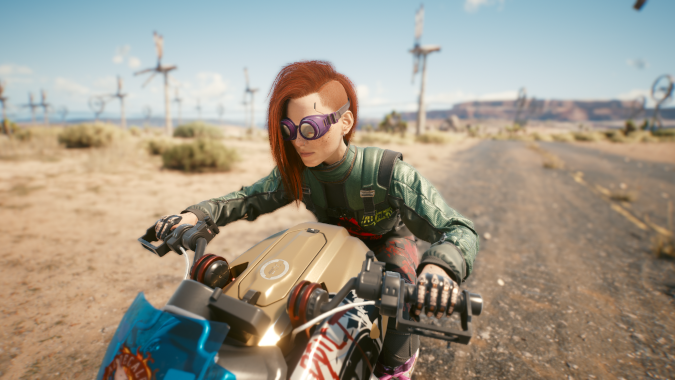 Honestly, it’s really freaking bright in the Badlands around Night City and there’s a lot of sandstorms, I feel like goggles would be very practical there.

I’m afraid the entirety of yesterday’s Queue is going to be about a boat, but maybe I’ll get luck and there will be some questions.

ARTHONOS GIVES ME AN IDEA

I sort of wish Blizz brought back talent trees for pets, but made them more like what characters have right now. Give us a few tiers of 3 talents each, and put the specialization abilities like primal rage or survival of the fittest on there, so that way I could grab a cool looking pet and customize it for the roll we want. Raptors that can tank as well as Scalehides! Toads that DPS as well as Devilsaurs!

I kind of wish they’d steal the Diablo 3 follower system that just got implemented this week and have Hunter and Warlock pets wear armor. Warlock pets could use weapons as well, but to balance that out, Hunter pets could choose between one of three talents every twenty or so levels, for a total of three talents by level 60. One of the talents would be choosing between plate, mail and leather armor, and would add specific benefits based on that choice — plate pets would get higher armor, for example.

Warlock pets would just wear mail. I’m not married to a Warlock so I don’t have to think as hard about what they should get for their pets.

IF ARTHONOS ASKS FOUR MORE QUESTIONS HE GETS A FREE SUNDAE

Q4tQ: Lots of people are speculating that Diablo 4 will have some sort of shield wielding class, and I’ve seen lots of discussions about whether it will be the Paladin from D2 or the Crusader from D3. How would you feel if Blizz decided to design the class similarly to the Rogue, where you could choose how to customize it and whether you’d like to play it more like a Paladin, more like a Crusader, or somewhere in between? Do you think there are enough unique ideas in there for it to work, or would the experiment just end up watering down both class identities so much it ends up being too bland?

I basically proposed exactly that, except I included Templars in the mix, so I’d probably be okay with it. I’ve long thought a Zealot class that combined aspects of the various ‘holy warrior’ archetypes in the Diablo setting, letting you play as a Paladin type, a Crusader type, or a Templar would be pretty ideal.

I HOPE YOU’RE HAPPY, SIBYLLE, YOU JUST CHEATED ARTHONOS OUT OF A SUNDAE

Q4tQ: In your opinion, what’s the most terrible pun in terms of an NPC name in WoW.
Alternatively, what terrible pun names would you like to see?

Such as “Elizabeta” and “Elizaalpha”, twin sisters, or something similarly awful.

I love that her name is a joke.

I love that she angered Cro Threadstrong to the point he was screaming incoherent threats about destroying her, but refused to believe it was her.

I love that she’s apparently a member of the Uncrowned, or at least hung around with them in Legion.

ARTHONOS, I’M JUST DOING THIS TO TAUNT YOU WITH THAT SUNDAE YOU WON’T GET

I’ve been lucky when it comes to my Switch controllers, as I got the system at launch in 2017 and yet others have had their controllers break much sooner. Still I’m a little sad that the drift problem has progressively gotten worse over the past few months and I’m on the verge of needing to buy a new set of joycons. I had hoped to wait until the sweet Zelda themed ones launched this July, but I can’t see myself wanting to just let the system sit unused for 3 months. Fingers crossed I can at least finish Fire Emblem before they give up the ghost.

I often wish I could have gotten my wife the Animal Crossing Switch.

That’s pretty much all I have to say about the Switch, I don’t own one, I’ve never played a game on one, I’m not particularly interested in one, but I do enjoy seeing people excited and happy about theirs so I hope you get new joycons soon.

But sadly, no sundae this Queue. You came close though.

MUSEDMOOSE SAYS WHAT I WAS THINKING

Q4tQ: is anyone else surprised that Blizzard announced the upcoming 9.1 PTR today? I’ve gotten so used to these things coming out shortly after the podcast crew does their show.

Q4tQ: what are some interesting things about Anduin Lothar? Besides his role in leading the exodus of a fallen Stormwind, and surrogate dad to Varian.

He was the Armsmaster of the Brotherhood of the Horse, a powerful knightly order that at one time had a headquarters in Medivh’s tower, Karazhan. The sword Ashkandi was Lothar’s blade at one point in his life.

Anduin Lothar was captured by Ogres while trying to find the Tome of Divinity and spent 20 months captured in the Deadmines. This led to numerous Orc victories during the First War as Lothar wasn’t there to lead the forces of Stormwind or the Brotherhood of the Horse in battle.

Anduin Lothar was bald in his later years.

It has not been established in canon that Taria Wrynn was Anduin Lothar’s sister. If she was, then it seems that her descendants don’t count as ‘true’ descendants of Thoradin, first of the Arathi kings. Because if Taria Wrynn was Anduin Lothar’s sister, then Varian and Anduin Wrynn are Lothar’s nephew and grand-nephew, respectively, and thus descend from Thoradin.

I personally think they should just establish it as canon, if only because I would like that connection.

SPENCER MORGAN, YOU ALSO COULD HAVE GOTTEN A SUNDAE, BUT ALAS, YOU WILL NOT

Q4tQ: Was anyone else disappointed in the rushed story of 3 distinct dwarf clans be reunited as one nation?

Ironforge had always been lawful good, and Wildhammer were simply dwarfs that learned to love surface life, nature, and open spaces. The chaotic good dwarfs.

Dark Irons however, worshipped a being of fire and destruction. Practiced slavery, and abandoned any ethics based justice system, in favor of using their prisoners for arena blood sport. They’re lawful evil, and the ongoing process of steering your people away from such radical social norms is a painful, ongoing process.

Unless you’re Moira Bronzebeard. Then you’re people just show up in Ironforge having sworn off slavery, fire worship, and execution by blood sport entirely. No holdouts, no talk of overthrowing ‘Moira the usurper’ or “Moira the Bronzebeard”.

First, the Dark Irons didn’t worship a being of fire and destruction. He blew up their city, forced them to live in bondage to him or die, and infested their underground fallback bastion with raging elementals and threatened them with utter annihilation if they didn’t serve him.

Now, Moira still had to deal with a conspiracy by several Dark Iron that tried to assassinate her, fought for years with various members of the Dark Irons who were loyal to Ragnaros and his minions, and used her son’s claim to the throne like a bludgeon to drag them kicking and screaming into something like membership in a joined Dwarven nation, but it’s true that the process hasn’t been the central part of any WoW expansion. We have not had World of Warcraft: Let’s Focus On The Dwarves yet.

There is a certain amount of broad strokes storytelling involved in World of Warcraft, and some things end up in the background for a while. I mean, I still have no idea where the Forsaken live — okay, not live, they’re not doing any of that, but where do the Forsaken keep their stuff? Do they all just hang out in Orgrimmar? Are they scattered through Tirisfal and the Plaguelands?

We haven’t seen much about the Night Elves, either. We’ve heard a few things about them living in and around Mount Hyjal now, but that’s basically it. To a degree, this is because the Warcraft setting and especially World of Warcraft needs some things to remain as background details — we can’t focus on everything. It’s an extremely big game with a lot happening, and inevitably we as players will be interested in something that doesn’t get the focus we personally would prefer.

I mean, you think the Bronzebeard’s and Ironforge are ‘lawful good’ when they usurped the reign of the Anvilmar family, despite living Anvilmars existing to the present day, because they felt power would be better in their hands. That’s fascinating, but we’re likely not going to get a dungeon or raid or long quest chain about restoring the Anvilmar dynasty, or thwarting their attempt to return to power.

Okay. That’s the Queue for today. Sadly, no one got a sundae.

Make sure to ask some questions for Mitch, y’all.

Blizzard Watch is made possible by people like you.
Please consider supporting our Patreon!
Filed Under: Anvilmar Pride, Ashkandi
Advertisement