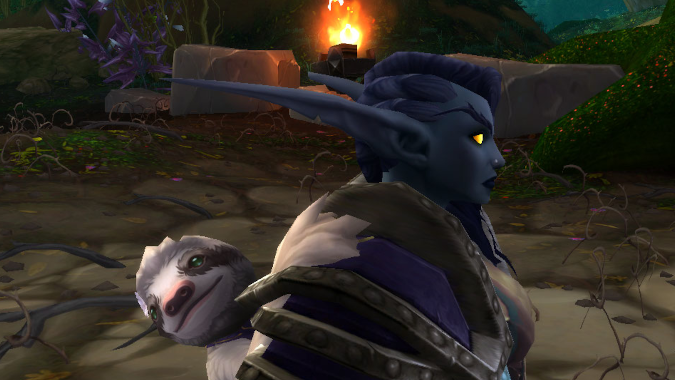 You can see the header image — do you really need me to say anything more? Can I just get away with nothing but screenshots? All of us here at Blizzard Watch content extraction mining LTD were discussing the new sloth pet Daisy and our intrepid foreperson Liz Harper tipped back her digital hat and said I want a post about transmogs that go with Daisy and when we all laughed she fixed a steely eye upon us and said that wasn’t a joke and so, here we are, talking about the transoms that best match our new sloth friend.

Now, obviously I mostly play Warriors with a smattering of Paladins and Death Knights, which means the vast majority of my transmog looks are plate. I’m not saying I’ve now got a reason to level my Shaman or Hunter, Druid, or Monk, or really any cloth class, but I’m not rejecting the idea, either. Still, I went around and looked for some options for transmog sets that work well with Daisy. 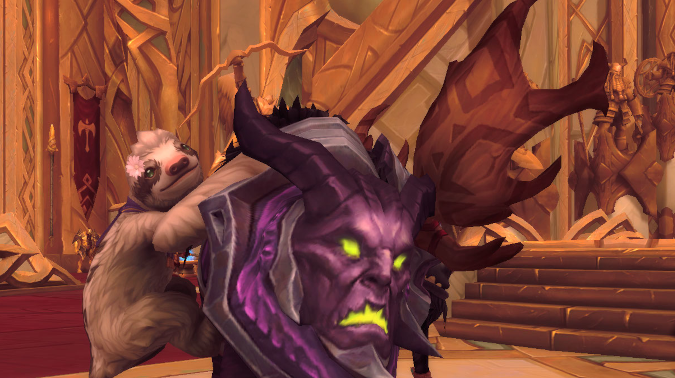 I tried this look on my Tauren, but clearly, I don’t think it works. Daisy looks cute, yes, but the giant demon face pauldrons obscure her from all but a direct view and she looks like she may be having trouble getting purchase, which isn’t ideal when you have a sloth riding on your back. We want Daisy to be secure on the back. I tried a bunch of other looks, but all felt like they had the same problem, so I went over to Alliance for a while and pondered about it.

What about Warrior Tier 10? I thought. It’s got lookalikes so Paladins and DK’s can use it, and it’s a neutral color, light brown with some gold trim. It felt like a solid place to start. Unlike Warrior Tier 6, it lacks a lot of spikes — while I felt that Daisy might view spikes as a form of climbing enrichment, others believed that it would be cruel to make her clamber up on a spiky set. 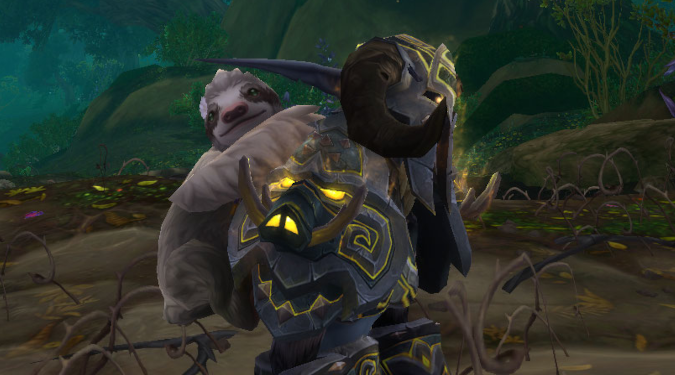 Now, I think this is a solid look, if that’s what you’re going for. Its colors work well with Daisy’s fur, although it doesn’t really match up with her little scarf. It’s a better option than the rather sinister Death Knight tier 10, which I have in both black and red, neither of which really work with Daisy or her scarf, and the Paladin options don’t really feel better. So I was fairly convinced, but then I thought I could try to get something rounded. 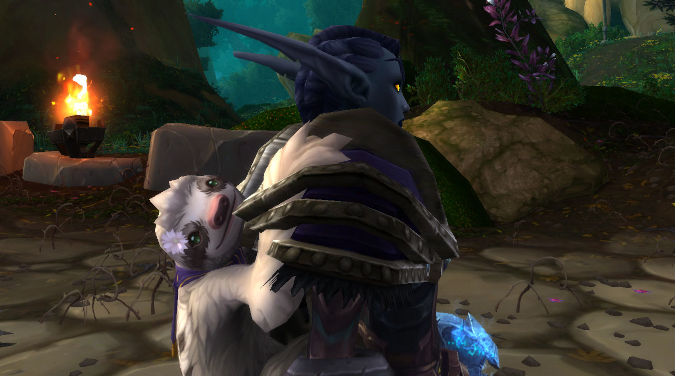 Cons here are the same cons for a lot of shoulder armor — Daisy’s big clawed paws clip right through like 90% of the shoulders I tried. I don’t want to imagine Daisy either punching holes in my armor or hurting her paws when the armor clips through her, so while I generally liked this shoulder armor — the Majestic Silversmith Shoulderplates from Trial of the Champion, the 5 player Argent Crusade dungeon — the clipping really didn’t work for me.

In fact, no matter what type of armor you wear, I’d say clipping issues and obscuring Daisy are the two big no-no’s when trying to match your transmog to this adorable girl. You want folks to be able to see her. I felt kind of stymied at this point, with not a lot of options working out. World of Warcraft shoulder armor, especially plate shoulder armor, tends to be pretty massive. I rejected most of the armor options from The Burning Crusade for this very reason, and I sure wasn’t going to use the vanilla armor since there are spikes and jagged edges and in one case literal axe blades on those things.

But then I had a thought. What about the Wardenguard set from Battle for Azeroth? It’s purple, so it’ll match Daisy’s scarf, and I have a curated set that omits the BP, letting Daisy snuggle up against my back. Let’s give that a try. 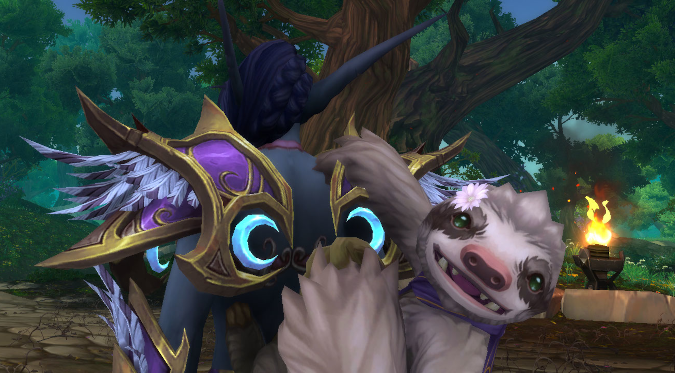 While there’s still a little clipping, it’s pretty minimal, and Daisy seems happy with it. And Daisy can hold on while you go into battle with this look, which is a big priority — you do not want to drop your little battle assistant in the middle of combat. And indeed, Daisy clings like a pro. 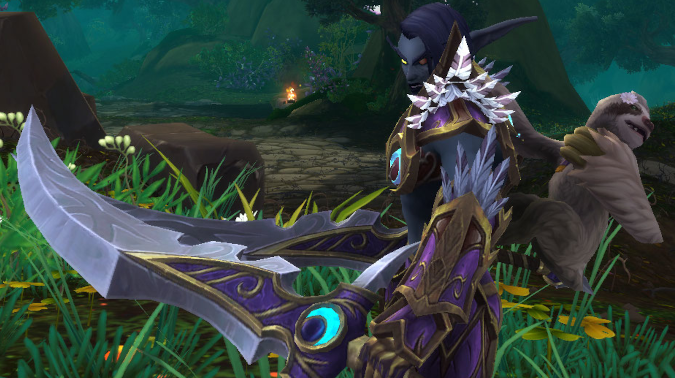 Right about now you’re probably thinking that I’m just taking advantage of this post to put a bunch of pictures of Daisy on my shoulders while I do stuff. Yes, of course. But I did keep thinking about the best Horde option for Daisy, since the Wardenguard is Alliance specific. What set could match up well with Daisy’s little scarf?

Huh, what if I just tried the Deathguard set? 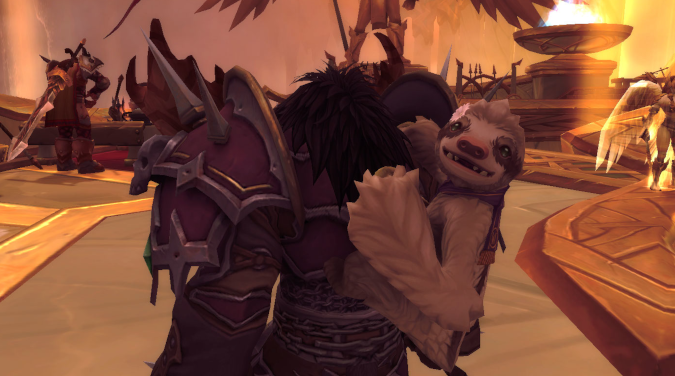 Now, yes, there are spikes, but they’re way out of the way, and you could always get the spikeless version if that’s what you prefer. The color scheme actually matches Daisy’s scarf, maybe even a little better than the Wardenguard. I think this is my ultimate winner for Daisy mogs — most of the Shadowlands plate is either angular and robotic or really over the top with blood red and jagged edges, so I’m ultimately of the opinion that it doesn’t work well with Daisy’s vibe.

For leather, get any Druid set that has leaves for shoulders. She’ll think she’s riding on a big tree.

So my opinion is, the Wardenguard/Deathguard sets from BFA are the best match for Daisy’s scarf, and the Ymirjar Lord set from 10-man normal ICC are the best option if you’re looking for a neutral color palette closer to Daisy’s fur. I’m working on a mail look to go with her, so if y’all have suggestions please throw them at me.

Blizzard Watch is made possible by people like you.
Please consider supporting our Patreon!
Filed Under: Battle-pets, Daisy, Daisy The Sloth, Plate, Transmog, Transmogrification
Advertisement