Australotitan confirms the widespread range of the Titanosaurs 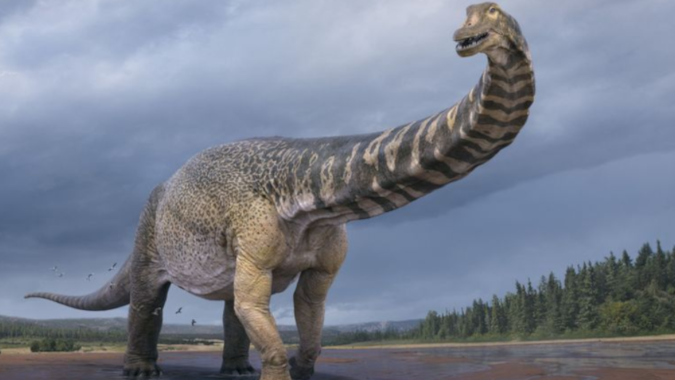 We all know I love dinosaurs, so it shouldn’t surprise you that I’m about to write one more, because the discovery of and description of Australotitan is a big deal for more than just the behemoth’s size. Australotitan cooperensis fossils were first found in Cooper Creek in the Eromanga Basin back in 2007, but the work to identify this fossil and establish that it was indeed a new species has taken until now. It’s a reminder that there’s a lot of paleontology research going on today, much of which is painstaking work in collections of fossils that have already been extracted from the earth — but not yet fully studied — all over the world.

Australotitan cooperensis was a massive creature, one of the top 10 to 15 largest sauropods ever to exist, ranging up to 80 tons and over 25 meters long — that’s 82 feet long for our American friends — and this makes it by far the largest dinosaur so far discovered in Australia, dwarfing its previously discovered relative Wintonotitan and the other two discovered Australian sauropods, Diamantinasaurus and Savannasaurus. All of these new Australian sauropods are just some of the many fossils still being studied in Australia, and it’s really telling that so far all of these sauropods are related species. None were as massive as Australotitan, though. The Cooper Creek site has had many unique fossils discovered over the past seventeen years. This has really changed our view of Australia’s dinosaur diversity, although due to the difficulty of studying such large, fragile fossils the work has been slow.

What’s really amazing to me is to have this evidence of the ancient past — specifically the time period when South America, Australia and Antarctica were still connected while Gondwana was breaking up during the Mesozoic — and massive Titanosaurs like Australotitan could travel from South America to Australia. The discoveries of animals like Australotitan and Wintonotitan in Cooper Creek mirror earlier discoveries like Argentinosaurus back in the late 1980’s, helping establish that the Titanosaurid lineage ranged across the south of our planet.

This discovery is an achievement in many ways, from the new scanning technology that let them examine the giant fossils without damaging them to the painstaking work of comparing them to other such fossils to ensure that Australotitan was a new species over a decade and a half. It’s also a reminder that many, many other species may yet be in collections, waiting their turn, and there’s a whole lot more we don’t know about yet. I’m super excited for the possible future of the Cooper Creek site and what it may teach us about Australia’s ancient past.

Blizzard Watch is made possible by people like you.
Please consider supporting our Patreon!
Filed Under: Australotitan Cooperensis, Dinosaur, Dinosaurs
Advertisement