Sanctum of Domination Race to World First: The Nine have been defeated! 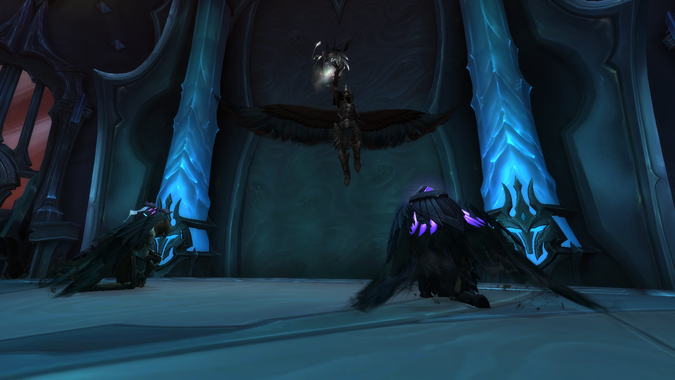 The Nine is (confusingly) the third boss we’ll see in the Race to World First Sanctum of Domination. It’s time to defeat Sylvanas’ powerful Val’kyr allies, and these once gloriously angelic Val’kyr are looking a little eviler these days. Now Soniqs Imperative has proven they have what it takes to make it in the World First race by being the first guild to down the Nine.

Soniqs Imperative have continued their onslaught through the Sanctum of Domination — easily defeating the Nine while everyone else was still under the withering gaze of the Eye of the Jailer. They made the Nine look easy, finishing the fight with 17/20 of their members alive. As they move on to the Remnant of Ner’zhul they’ve got a comfortable lead over the other guilds.

Guilds tangling with Mythic they’ll have to deal with Fragments of Destiny for the entire fight. This mechanic is present only in the second phase on Normal and Heroic, but in Mythic you get it right away. Each Shard of Destiny will create a large frost zone that players will have to place on the edge of the room to preserve space and keep themselves out of danger. Dealing with overlapping these frosty zones will be a soft enrage for the fight as eventually — they’ll just run out of room to stand and dodge.

The other major change Mythic raiders will have to deal with is that they get additional mechanics from the first phase during the second. Skyja, the First will call all of the other Val’kyrs to do their unique abilities when her energy bar reaches full — including the major raid displacing ones Reverberating Refrain and Wings of Rage. Dealing with being pushed and pulled while also dodging and spreading out as necessary for the other mechanics will be what sets these guilds apart as they work to move deeper into the Sanctum of Domination.

The Race to World First is now well underway, though the raid won’t open for Europe until tomorrow. Many guilds from around the world will be streaming their attempts to be the first in the world to defeat Sylvanas on Mythic difficulty. Will Limit reign supreme for the third raid in a row, or will they be dethroned by Echo? We have more information about who is streaming, how you can watch them, and how far into the raid they are here on Blizzard Watch.