Sanctum of Domination Race to World First: Fatescribe Roh-Kalo has met his destiny and been killed by Limit 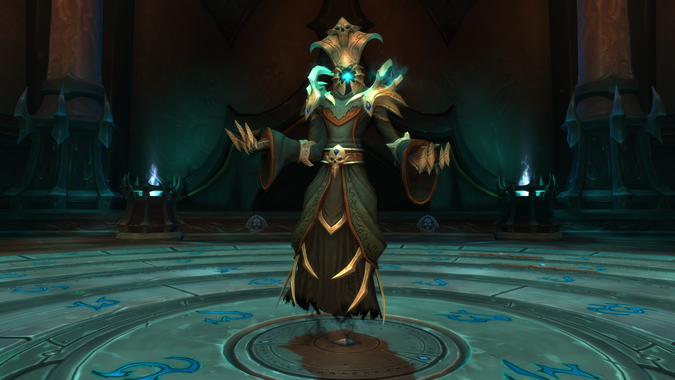 We’ve finally caught up to Fatescribe Roh-Kalo. The last time players saw him was when Dreadlord agents of the Jailer kidnapped him right in front of us. He is the eighth boss on our Race to World First trip through the Sanctum of Domination, and he’s going to prove which guild has the coordination and the skills to fight fate.

Standing in stark contrast to the Guardian of the First Ones, Fatescribe Roh-Kalo has a huge amount of mechanics to throw at you. The crux of this fight is manipulating the encounter space to ensure that the Fatescriber doesn’t change our fates and bring about the Darkest Destiny. Mythic raiders will have to deal with fully half of the raid being assigned a specific rune on the Loom of Fate that they must go and stand on within nine seconds. Failing to reach their specific rune will cause a fatal burst of Shadow damage to hit the entire raid, causing a wipe.

They’ll also have to deal with Exposed Threads of Fate during the second phase. While players are busy spinning the rings to line the runes up in the proper order again, giant deadly laser beams will appear between the runes being moved and the Fatescriber. Touching one of these Exposed Threads does about 40,000 damage a second, so even the tankiest tanks could only endure that for a brief moment. To make matters worse, the boss will select the players who will be in charge of spinning those rings at random. So you better hope that whoever he chooses understands how that mechanic works.

There is no destiny but what we write ourselves. Complexity-Limit has gotten the lead back in the race to world first by defeating Fatescribe Roh-Kalo! After just 54 pulls they managed to master the Loom of Fates and stop this corrupted servant of the Jailer from authoring the darkest timeline. All of their work earlier in the week running their Heroic Splits paid off with this fight because their damage made quick work of the Fatescribe and his minions. The big mechanic that they had to overcome was the Exposed Threads of Fate while they were spinning the plates back into position, but it turns out that they were always able to spin the plates in the same direction so it was much easier for the raid to dodge the lasers than originally thought. Once they mastered dodging all of the explosions and giant beams of energy from the sides of the room it was a fairly easy fight.

With Fatescribe falling only Kel’Thuzad and Sylvanas remain between Complexity-Limit and victory. It remains to be seen though if Kel’Thuzad is going to be as difficult as the Stone Legion Generals were in Castle Nathria. We could see the next big pile-up of guilds all working on Kel’Thuzad for the rest of the weekend.

Previous fight: Guardian of the First Ones — Sanctum of Domination Hub — Next fight: Kel’Thuzad

The Race to World First is well underway as the top guilds close in on Sylvanas, and guilds from around the world are streaming their attempts to be the first in the world to clear Sanctum of Domination on Mythic difficulty. Will Limit reign supreme for the third raid in a row, or will they be dethroned by Echo? We have more information about who is streaming, how you can watch them, and how far into the raid they are here on Blizzard Watch.