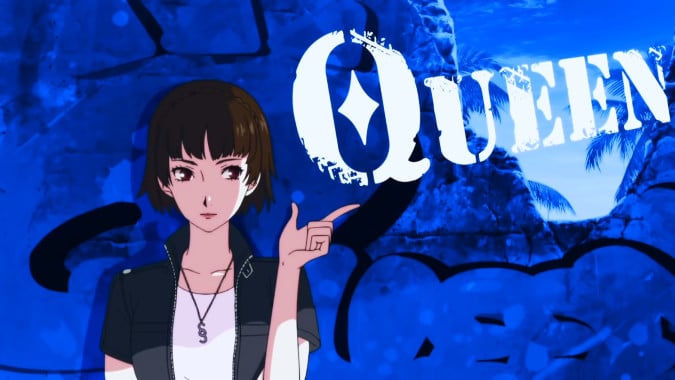 That’s Makoto Nijima, codename “Queen,” from Persona 5. She’s one of my favorite videogame characters of all time.

I wanted to say that, and I have some other things to say:

Edwin VanCleef did nothing wrong.

Elune is a giant Moonkin.

Q for Red’s Q: Hearthstone’s Book of Heroes has one slot left, for Illidan. Do you think we’ll ever see the other class heroes that can be added to the Book of Heroes, like Tyrande and Sylvanas, and Medivh? Or added in a secondary selection like with the Book of Mercenaries? Or do you think future solo adventures will be reserved for new characters?

Honestly? I’m not sure if I want them to do more Book of Heroes episodes. It feels like some of those same stories keep being recycled, over and over — I’ve lost count of how many times we’ve fought against Garrosh by now, across all the different characters! Those older Warcraft storylines have already been told and retold many times; and if Team 5 decided to tell the stories of Sylvanas or Tyrande, it’s only natural that we’d be in for even more repetition of the same old story threads.

The Hearthstone team clearly has a much better time when they’re telling brand-new stories, with the characters they’re creating — as seen in Book of Mercenaries. But even then, when it comes to gameplay, I have to say that those aren’t exactly super compelling pieces of single-player content. You play through each character’s eight chapters once, and never have any reason to go back.

I’d rather see the Hearthstone team focus their efforts on a more robust single-player mode, with more variation, and replayability factor. And if they can nail that game mode, they will probably have more creative freedom to do so while telling new stories, that are written to fit into this new mode. How about, say, a “choose your own adventure” done in the Hearthstone style, instead of a linear narrative?

QftQ: What’s a sidecharacter, or story you’d like to see further explored?

For me, my top3 would be to see the Steamwheedle Cartel expand and have Gadgetzan and Ratchet grow in both size and significance. Then there is the retaking of Gilneas, and resettling Gnomeregan.

I’d like to see the Night Elves and the Forsaken find new homes for themselves — closer to their allies. Simultaneously, the Draenei and the Blood Elves would relocate, mostly for safety reasons — adding an opportunity for their starting zones to be revamped, with brand-new quests, and flying enabled.

The revitalization of the Western Plaguelands would continue: the Night Elves would plant their new World Tree in the middle of the zone, which would be renamed to something in memory of the victims of Darnassus. Their new home city would actually sit on the boughs of a gigantic tree, rather than on a gigantic tree stump. Three dimensions!

It would turn out that the Cenarion Circle’s efforts to revitalize Desolace didn’t pay off — the place was simply being too tainted by Fel energies. But who’d want that barren, Fel-scarred grey desert, then? The Forsaken, that’s who! Their new city would be a floating Necropolis, hovering menacingly over Desolace, but also accessible via a portal located within the Ruins of Lordaeron.

Much like Dalaran, Silvermoon is a powerful magical city. Being filled with powerful Magisters and fueled by the Sunwell, it’s only natural that Silvermoon would be able to teleport itself as well! In order to not be abandoned near Alliance territory, completely isolated from the Horde, Silvermoon city would relocate itself to a nice spot in Kalimdor: how about Azuremyst Isle, that the Draenei just left behind?

Yes, because the Exodar has been fixed, since Legion. And while the Draenei have decided to stay on Azeroth and be a part of the Alliance, there’s no reason for them to remain on their original crash site — so the Exodar now floats all over the Eastern Kingdoms, and you may access it from several gateways across the continent.

Q4TQ: Looking for a warcraft/blizzard/gaming-esque podcast/youtube recommendation for women or POC creators. Currently partaking in the instance, lorewatch, blizzard watch podcast, and taliesin & evitel but there’s not a ton of “diversity” in all that and always room for more perspectives. Any recommendations would be appreciated.

I would recommend Girls Gone WoW. They have super fun personalities that lead to good banter about WoW (and other stuff). Our own podcast heroes Matt Rossi and Joe Perez have been guests on that show a few times!

Q4tQ If you picked up the BlizzConline ’21 bundle, have you used your Blizzard Store merch discount code?

Q4tQ: Do you think Varian’s sword could “call out” to him and Varian will come to save his son?

That’s an interesting idea. I would certainly love to see Varian again, and a reunion between the two could be very touching. Those personal moments where our characters cease to be “heroes” and show their vulnerabilities can be very well done in WoW, as we’ve seen a few times — even very recently, with Draka and Thrall.

I subscribe to that idea. I want to see Varian be the one to save Anduin.

Q4tQ: what 3 gaming franchises would you most like to see get a MMO entry?

1) Overwatch. I mean, that’s what Project Titan was supposed to be, right? Overwatch 2 promises to deliver more story content, as well as character progression — which makes me think that the team might be testing out some of the ideas they had for what Titan was originally supposed to be. If those features end up being a success… who’s to say that the original idea couldn’t be resurrected, in some shape or form?

2) The idea of a Pokémon MMO is one that fans have discussed so many times over the years that it’s frankly bizarre that Nintendo never decided to do it. Starting out as a low level trainer with a lowly monster in a humble town, and battling your way up the league, defeating trainers, catching monsters, and earning badges — but every trainer you see out in the world is a real person? That thing would be a hit.

3) A Persona MMO would be somewhat similar to the Pokémon one, except it would be more of a supernatural high-school setting where you negotiate with friendly demons (and other mythological creatures) in order to inherit their powers. This MMO would feature ever-changing dungeons based on the psyche of villains — fighting their distorted views, rather than facing them directly in combat. Much like the single player Persona games, it would have very interesting social systems, and mechanics where you’d build strong social links with NPCs. But also with your fellow players! What if building relationships with your guild members could be reflected in greater combat power? And you’d also have to build up your skills, study for tests, work part-time jobs, fish, and more — all of which are activities that would fit very well with an MMO environment.

Q4tRedQ: are there any Hearthstone mechanics that aren’t in the game any more that you’d like to see brought back?

Hero cards. More specifically, the ones from the Knights of the Frozen Throne expansion, where our usual heroes were replaced with “what if?” versions, such as Frost Lich Jaina, Shadowreaper Anduin, and Scourgelord Garrosh. Some of the most fun mechanics ever introduced to Hearthstone — such as the “Razakus” deck for Priest, and the ability to craft Zombeasts with Rexxar — were in that expansion, much thanks to those Hero cards.

So who is sexier? Cairne or Baine?

This has been The Queue. I need to clarify that I was kidding about some of my previous statements: Edwin VanCleef did some wrong things (as did Vanessa, as loathe as I am to admit). And Elune is (probably) not a giant Moonkin.

But Makoto is still Queen.

Blizzard Watch is made possible by people like you.
Please consider supporting our Patreon!
Filed Under: Queen
Advertisement