What’s your favorite boss fight in Sanctum of Domination? 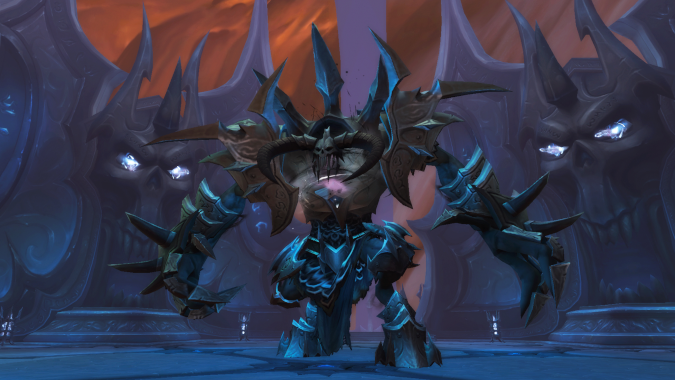 If it’s Sylvanas, go ahead and say so.

For me it’s the Tarragrue, because I’m just inordinately fond of that giant monstrosity made out of the souls of the damned hammered into a violent shape and given some unhallowed approximation of life in an effort to make everything just awful for everyone it encounters. After that, maybe it’s the Eye of the Jailer, because I dislike Odyn just that much, and also because it’s a weird fight. I mean, the whole Fractured Soul mechanic? That confuses the crap out of me, and that’s something I like in a boss fight.

But I think the best one might actually be the Guardian of the First Ones, which is a lore implication bonanza that is almost certainly setting up what we’re going to see in the next couple of raids. It’s just perfect, really. Plus it Sunders! That’s such an old callback I can’t even be mad when the debuff gets applied, even though it’s such a blatant force a tank swap mechanic I get a warm glow inside every time I see it. Wait for Sunders indeed. So it’s kind of hard for me to pick between my two giant horrible death robot sons, ultimately.

But you’ve had time to do this raid by now and so I feel like it’s time to ask you what you think the best encounter in the raid is. Who is your favorite boss? Why are they your favorite boss? If it’s Sylvanas, is it the mechanics, the lore, or finally getting to deal some damage to the person ultimately responsible for us all being in the Shadowlands in the first place? A lot of my friends seem to like the Remnant of Ner’zhul, I gotta be up front, I am not one of those people. Do not like him at all, do not want, 0/10 would skip.

But it’s your turn. Which boss fight in Sanctum of Domination is your favorite?

Blizzard Watch is made possible by people like you.
Please consider supporting our Patreon!
Filed Under: Eye Of The Jailer, Guardian Of The First Ones, Odyn Is A Jerk, Remnant Of Ner’zhul, Sanctum Of Domination, Tarragrue
Advertisement