The Queue: Eye have made a terrible mistake 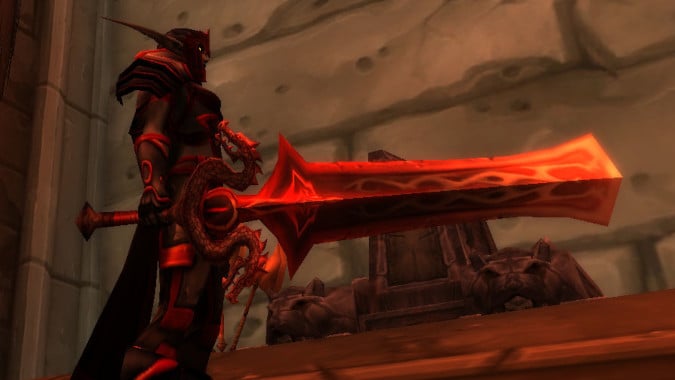 Seriously, doing a Queue after Cory’s massive optical pun extravaganza 2021 was not a  great idea for the guy who gets routine injections and occasional laser blasts to his retina, burning holes in it. But what I want doesn’t matter, when what I’ve chosen is at hand — a Tuesday Queuesday, as it were.

I was going to use a header image of C’thun for this, but then I remembered Ashkandi has a big eyeball in the hilt, and here we are.

I’m listening to Gladiator by Zayde Wolf.  Now you can too!

Here I am being a nice bear and saving an Alliance Pandaren Shadow Priest from certain death at the hands of Mawsworn at the Assault in the Maw, and when all of the ones they’ve tagged are dead and there’s just one left attacking me that’s my tag — they don’t even stick around to help me kill it.

Maybe they found your role in the burning of Teldrassil un-bear-able. Even balancing your recent aid ursus that culpability, they chose to arctos to preserve their own life and leave you to whatever Grizzly fate awaited you. It may seem contrary to the Kodiak of conduct, but it’s ultimately a reasonable RP choice, as the Polar disparity between you is too great to bridge.

Q4tQ: what WoW class is most like a classic anime magical girl?

Asking because I’ve been talking D&D with friends and they made me realize that my warlock is one transformation sequence away from being a magical girl and I don’t know what to think about that.

Wow, I’m at a loss here. Erza Scarlet is the only real analogue to a Warrior I can think of, with her Requip Magic and ability to survive ridiculous amounts of damage, which makes me want a Warrior ability that summons all of my weapons to float in the air and attack something at once. Maybe we could bring back Retaliation?

I’d probably agree with the general consensus that Paladins and Priests are pretty solid contenders for Magical Girl status. But Warlocks are a surprising dark horse contender, and yet it all fits, down to the snarky sidekick if you want one. And green is a surprisingly good color for magical girl transformations.

Also, and I’m sorry if this is a sore spot for you Warlocks, but Demon Hunters do have Metamorphosis now…

Why is it such a grind to Tier 6 for the Archivist? I’m annoyed enough that I have stopped doing the dailies just making the grind take that much longer.

I think the problem with a lot of modern rep grinds is that there’s no way to autopilot them. Like Sibylle mentioned the Timbermaw, and that’s a rep grind I actually did (and completed) in Vanilla, because my wife wanted Agility enchants on her two Bone Slicing Hatchets. That’s right, I did the Timbermaw grind before Blackwing Lair was even out yet. Because of two factors:

Now, I understand not everybody can or will play as a Human. I sure won’t. But the second one is still possible. I think any rep grind should have a means to just go and grind away at it as much or as little as you want that doesn’t make you feel gated or stopped by the game itself. 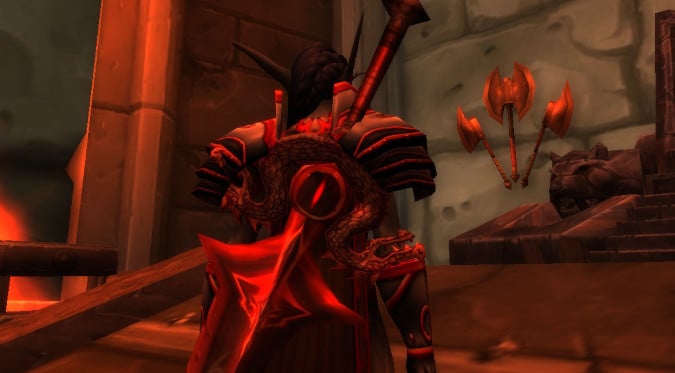 I think it’s staring at you guys.

You thought the joint was too bland and needed a splash of color?

Q4tQ Regarding Eye of the Jailer, do we return it to Odyn or something after killing it, or is it just a looted corpse?

Man, are you kidding? I’d never subject any boss I’ve killed to the grim fate of being one of Odyn’s Pokemon constantly proving themselves worthy to find his backscratcher or fix his bidet.

Q4TQ: What are you looking forward to the most in 9.1.5 and what pet battle content would you like to see added to the patch?

Fungal? Like an infection? You should get that checked out.

Anyway, I’m most looking forward to Battle for Azeroth raids and dungeons getting Legacy Loot, there are quite a few models I’d like to pick up from there. As for pet battles, let us use our various weapons as battle pets. I mean, it works for Honedge. 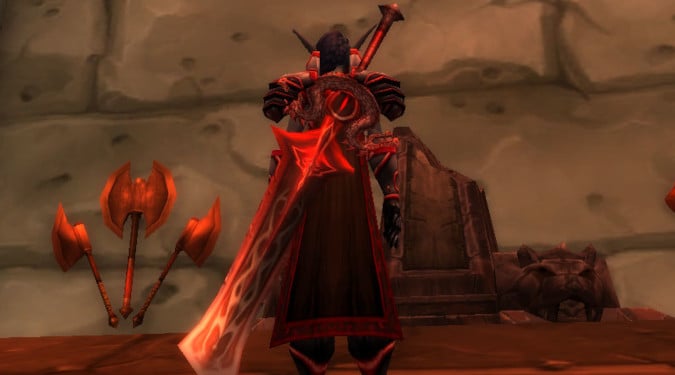 Seriously, you have to admit there’s a resemblance there. Fury Warriors could even get a Doublade thing going on.

Seriously, guys, I think it’s staring at you.

Okay, thanks for coming to my Queue. Anna is up tomorrow. I’ll see you next Wednesday.

Blizzard Watch is made possible by people like you.
Please consider supporting our Patreon!
Filed Under: Ashkandi, Ashkandi Has An Eye In The Hilt, Eye Puns Are Bad
Advertisement