With the latest Unearthed Arcana, D&D is trying to sneak the Star Frontiers races into the game without us noticing but we totally noticed 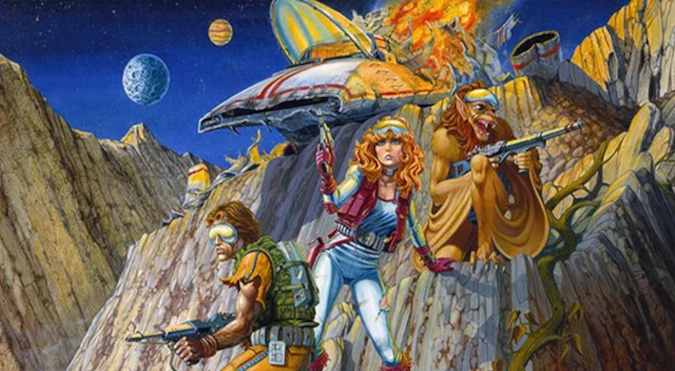 There are a lot of interesting new D&D races in the latest Unearthed Arcana playtest content from Wizards of the Coast, named Travelers of the Multiverse — and there’s definitely an extraplanar theme here. There are Astral Elves who are nigh immortal, the awesome Hippo warriors called Giff, and the Autognomes, artificial Gnomes who escaped or were freed by their creators and encouraged to explore the void. There’s the Thri-Kreen, one of my favorite old time D&D races and mainstays of the Dark Sun campaign world. With the Giff and the emphasis on planar travel, it definitely feels like there’s some kind of fusion of Spelljammer and Planescape in the works for Dungeons and Dragons.

At least until you get to the Hadozee and the Plasmoids races, when that theme starts to go sideways. If you’re an old school game nerd like me, you immediately yell these are from Star Frontiers at the top of your lungs and your wife comes in to see what the heck is wrong with you. If you’re wondering just what Star Frontiers is, it was TSR’s space fantasy setting and game back in the 80’s and 90’s. The Alpha Dawn box set came with four playable races — Humans, Vrusk, Yazirian, and Drasalites. The Yazirians were simians with wing-flaps that they could use to glide, and the Drasalites were a “plasmoid” race, literal sacks of plasma.

And that’s exactly what the Hadozee and Plasmoids are. It’s not even subtle; they’re direct lifts. The last playable race, the Vrusk, were an insectoid race not too different from the Thri-Kreen, so with the publication of this Unearthed Arcana you can now basically run Star Frontiers games inside your Dungeons and Dragons 5e game, incorporating the old science fiction into the weird multiplanar fantasy.

Interestingly, David ‘Zeb’ Cook, one of the people who did a great deal of work on the Planescape setting, also worked a lot on Star Frontiers — the last product in the line was named Zebulon’s Guide to Frontier Space more or less in his honor. So if we’re getting a new setting that mashes up Planescape and Spelljammer, it’s kind of fitting for the old Star Frontiers races to get introduced into D&D 5e. Ooh, maybe we’ll even get Sathar!

The presence of Giff and Astral Elves and Autognomes definitely makes me think Wizards is trying to merge all of its “outer space” or “cosmic” settings. We saw in Wild Beyond the Witchlight that Wizards is unafraid of mining their old nostalgic settings for new ideas, but this level of fusion makes me think we’re looking at a setting book that’s made up of several old settings. Heck, Star Frontiers was its own game. Since Spelljammer was the D&D in space setting from the old days, while Planescape was the exploring other planes of existence setting, it feels like a reasonable conclusion that we’re going to get a book all about multiplanar outer space adventures. Considering we’ll be seeing Mordenkainen’s Monsters of the Multiverse next year as well, I’d say Wizards of the Coast is putting all of their old cosmic eggs into one basket sometime next year.