Just who is Pelagos, and what role will he play in patch 9.2?

You may not really have paid a lot of attention to Pelagos when you first arrived in Bastion. Pelagos is the first trans character in World of Warcraft to actually have dialogue and any sort of role in the story, but it’s somewhat easy for him to fade into the background. He’s a deceptively unassuming character, after all — when we first meet him, it’s because we’ve to run into danger to save him from his own inability to complete one of the Kyrian ascension trials seeking to purge him of his past. Humble and self-effacing, he shows no sign of resenting you for it and indeed, quickly befriends you. After that meeting, Pelagos and his soulbind Kleia — the first Kyrian you meet when you arrive in Bastion — become our staunchest allies in the Kyrian. When we move on to defend Bastion from the invasion from Maldraxxus, Pelagos remains in Bastion, but we see him again several times — especially for players who join the Kyrian Covenant.

Now, we’re finding out that much of what made Pelagos a bit of an odd fit for the Kyrian may have been the reason for his ultimate fate in patch 9.2 — and be warned now, that we will be discussing 9.2 spoilers in this post.

The reason Pelagos had such difficulty with the trial you rescued him from — and the reason we’re told throughout the Bastion zone questline that he’s not ready to face the Forsworn — is that, like them, Pelagos simply doesn’t want to forget who he was in life. While he doesn’t seek to abandon the Kyrian and is fully committed to their goals, he’s a character who personifies the dilemma facing the Kyrian Covenant in Shadowlands: he sought to abandon much of his former life and memories in order to serve the Covenant better, and yet he couldn’t truly allow himself to forget certain key aspects of his former life and still remain the person who was worthy to serve in the first place.

The memories fade naturally as my former life draws ever more distant, and many others I have let go of willingly to fulfill my duties here. Except… Except for one.

It can be difficult to think about. I know I should let it go but…I want…maybe need…to remember it. It is too much a part of who I am to forget.

I had a female form in life. I don’t recall my former name, or even my race, but I…never felt like my physical form represented who I was inside.

It never felt as clear to me then as it does now. I struggled with that identity for my entire life… But when I arrived in Bastion I became an aspirant that looked like, well… This! A male form! I felt…comfortable! Excited! Like who I was inside matched what others saw for the first time! All of those feelings in my life finally made sense.

I may not reach ascension as fast as some, but I am truly happy on the path I follow.

Kleia would support him as he grappled with the process and accept his desire to retain certain memories… and in time, the Kyrian accepted the Forsworn back into their ranks and allowed them to retain memories of their lives, something Pelagos found key to his own development. The exchange where he reveals he is trans showcases how Pelagos can really understand how central memories are to one’s identity, which becomes the key point of the Kyrian campaign. 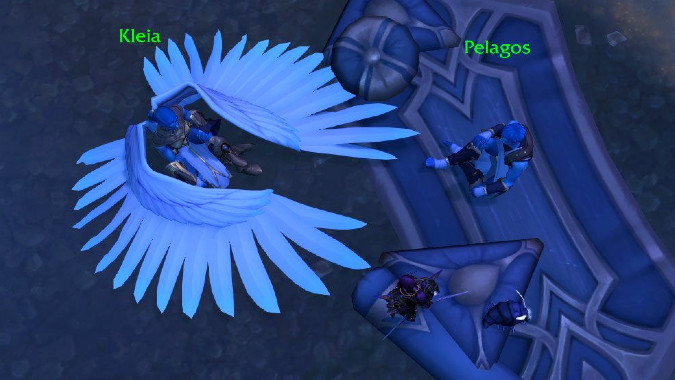 Pelagos is an aspirant who aspired to be himself

In a very real way, Pelagos is an objective correlative of the issues facing the Kyrian. He’s a tangible sign that they need to change, even if that change has to be brought by an outsider arriving in Bastion with bad news about why souls are no longer being sent to the Covenant.

It’s fair to say that while Pelagos is present for a great many moments of importance, he himself is rarely pivotal to those moments. He’s an untrained aspirant struggling through his trials to ascend, Kleia’s soulbind and closest friend, and your friend, too. Later, if you join the Kyrian, he’s essentially the character who serves the role of “new guy’ in the faction, the one who can question what and why they do it because he lacks experience and has his own unique perspective. Also, unlike many of the Kyrian who have been at the job forever, Pelagos still cares deeply about other people on a personal level — he’s not just about the task of shepherding souls to their proper afterlife, he very much cares about the people he meets.

Pelagos is just as surprised as anyone to find himself embroiled in the tumultuous events of Shadowlands, but he doesn’t let the fact that he feels wholly unprepared for the situation stop him from doing his best to help others. 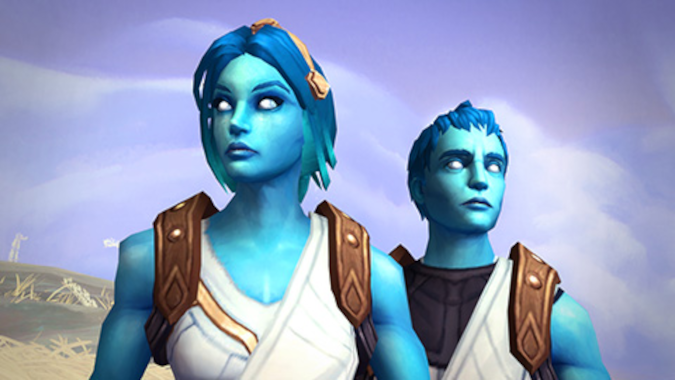 Learning what to hold on to and what to let go

I think a big part of how empathetic Pelagos is comes from his being trans, from the life he lived as a mortal, where he wasn’t accepted as what he was. Remembering that life makes him slower to ascend in the typical Kyrian manner but it’s fundamental to him as a person. It’s exactly this fact — that Pelagos has always been aware of about himself — that the Kyrian as a whole must accept to reunite with their Forsworn members and chart a new direction for the Covenant.

Major spoilers for patch 9.2 below.

In patch 9.2, Pelagos finds himself stepping into a role no one would have expected from him, ultimately because he has no choice. After the Jailer rips the sigil out of the Arbiter and leaves for Zereth Mortis, the Covenants realize they need a new Arbiter, and seek to create one. But the ritual is interrupted by the Jailer’s Dreadlord servitors, who unleash a fragment of the soul of Argus — the Titan we killed back in Legion, who has long been assumed to be involved in the whole breakdown of the machinery of death we’ve witnessed in the Shadowlands — and ruin the attempt.

This is when Pelagos steps forward and volunteers his soul to replace the Arbiter and help save the Shadowlands. There’s still a fair bit we don’t know about how and why this all happens, but it seems that Pelagos will be the pivotal figure who guides souls to their proper resting place from this moment on, as long as we stop the Jailer.

And it’s a role he seems to be uniquely suited for. All of the reasons he struggled to ascend within the Kyrian — how he’s held on to memories of his past, how deeply he cares for others — could make him the ideal choice to judge souls with compassion and send them on to their appropriate afterlives. His presence may make for a very different Shadowlands in the future.

So that’s the story of Pelagos — a struggling Kyrian aspirant who embodied the importance of retaining who you are even while his fellows scolded him for it, a loyal ally and caring friend, a witness to momentous changes in the Kyrian and the Shadowlands as a whole, and willing to give his very soul to restore the Arbiter and help bring balance back to Oribos.